Viticulture: The Curse of the Vineyard 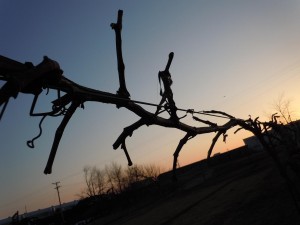 OK, maybe the vineyard isn’t cursed, but the weather seems to be, prompting our viticulture class (or maybe just me) to wonder if we aren’t somehow jinxed.

No matter what the weather the day-before or weekend after, all of our class sessions have been plagued with howling winds, frigid temperatures and drenching rain;  sometimes all three.  Tonight, it was just darned cold, but again, we learned something new.

Those of us who could move our fingers worked on pruning Niagara grapevines that were planted at the Kirkwood Community College vineyard in 2006. Being older and more vigorous than the vines we’ve previously pruned, they were a bit more challenging. The trellis system was also new to us: a Geneva Double Curtain, which looks similar to a double clothesline. This link from Iowa State University Extension includes a sketch of the trellis system, as well as more information about the Geneva Double Curtain.

Our instructor noted that the system is effective for spreading out vigorous vines, and with more of a canopy comes more fruit-per-acre. The downside can be with two different wires, the posts can be knocked askew. The middle also forms a canopy where some of the grapes in the middle might ripen at slower rates than those outside.

As cold as it was tonight – in late April – one thing was noticeably different about the vines. The buds are still nearly imperceptible, but the vines that were pruned were “weeping,” similar to sap that runs from trees; a sign that even if the weather doesn’t feel like it, the grapevines know that it’s spring and are ready to move from dormancy to new growth.