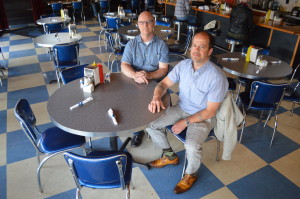 Owners Jon Wilson and Thomas Connolly are shown at the Bluebird Diner in Iowa City. The diner sources many ingredients locally and has extensive recycling and composting programs. (photo/Cindy Hadish)

A whirligig pig spins above the Bluebird Diner in Iowa City; a nod to the plenteous pork consumed inside and a kitschy welcome for customers.

At the counter, a waitress asks Frank Riehl if he needs his parking meter fed as the retired stained glass artist lingers over an afternoon coffee.

The house-roasted coffee and great service keep customers like Riehl returning, while behind-the-scenes, the bustling Iowa City diner is at the forefront of the local foods and environmental movements.

Jen Jordan, recycling coordinator for Iowa City, credits Bluebird owners Thomas Connolly and Jon Wilson for leading the way in food waste diversion.
Bluebird was the first Iowa City restaurant to divert organic waste for composting, rather than sending it to the landfill.

“It’s been building up slowly,” he said, adding that Iowa City’s compost program has capacity for at least 4,000 tons of food waste annually.

The program add steps to the disposal process and special bags and hauling add costs – though tipping fees are lower than for garbage – but Wilson said the effort is worthwhile.

“People are concerned about the environment and waste,” he said, noting that in addition to food left on plates, paper napkins and other organic items are sent for composting. “If we didn’t think it was worth it, we wouldn’t be doing it.”

Take-out containers are compostable, too. The Bluebird also takes recyclables such as milk jugs and juice containers to City Carton Recycling and cardboard is picked up from the diner at 330 E. Market St., in the heart of Iowa City.

“I bet we’ve cut our actual trash in half,” Wilson said. 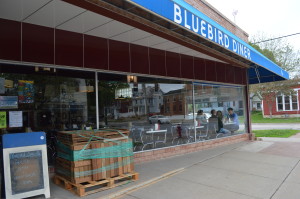 The Bluebird Diner opened in a former paint store in Iowa City in 2008. (photo/Cindy Hadish)

The Bluebird, with bright blue seating and blue-and-white checkered floors, opened in October 2008 in a former paint store, one of the serendipitous aspects of the business. Wilson was driving by the store when he saw a “for lease” sign being taped to the window.

“It was just kind of dumb luck,” he said, noting that the name, too, came simply enough. “My mother loves bluebirds.”

Both Wilson and Connolly worked in other restaurants, but with different backgrounds. Wilson majored in geology and received his masters in fine arts from the University of Iowa. Connolly, who earned a biology degree, also is involved in another restaurant his family owns in Iowa City.

As small business owners, the two both champion the idea of sourcing as much locally as they can. Jordan Creek Bison Farm, just 12 miles away, and Grass-Run Farms, Pavelka’s Point Meats and Mushroom Mills are among local producers that supply the restaurant.

“It allows us an opportunity to give back to our community and it gives you a superior product – better and fresher,” Connolly said. “People do care about that in Iowa City.” 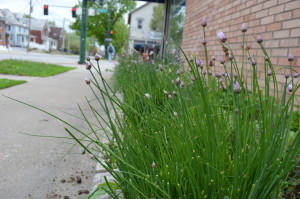 Chives, tarragon and other herbs that are used in specials are grown right outside the Bluebird Diner in Iowa City. (photo/Cindy Hadish)

It doesn’t get anymore local than right outside the restaurant door, where chives, tarragon and other herbs thrive in a narrow space where turf grass previously grew. A full-blown garden is planted outside their second location, the Bluebird Cafe in North Liberty.

The North Liberty cafe was another unplanned idea that “just came together,” Wilson said. The owners, who split their time between the two restaurants, weren’t looking for another site, but their front house manager found the North Liberty location and encouraged them to open there.

Both locations are open daily, with breakfasts the busiest meal at the Iowa City diner. 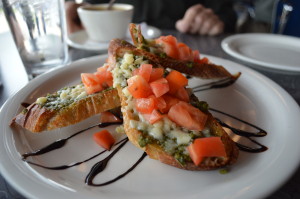 The Blueschetta, an appetizer with tomatoes, fresh pesto, Milton Creamery Prairie Breeze cheddar on house-made sourdough bread and drizzled with balsamic reduction, is one of the popular menu items at the Bluebird Diner in Iowa City. (photo/Cindy Hadish)

Bluebird waitress Allison Kinney pointed to the Krakatoa, an omelet with pecan-smoked bacon, jalapeno, red onions, and pepperjack cheese among the favorites, along with staples such as Bluebird Eggs: two eggs, hash browns, toast and bacon or another meat. “The French toast and pancakes always get rave reviews,” added Kinney, who has worked at the diner for more than a year.

Wilson said the Bluebird goes through “tons” of pork annually, with popular items including tenderloins and smoked bacon. Desserts, such as a light strawberry angel food cake and decadent chocolate cake bread pudding, are made in-house, with all breads soon to be made on-site, as well.

Riehl, one of many regulars at the Bluebird, said the 72-seat diner is oftentimes crowded, but the staff provides quick service regardless of how many customers are there.

Large picture windows provide natural light for the main seating area and a view of Iowa City’s busy Market Street. “You can watch Iowa City go by,” Riehl said, “and watch the storms come in.”

Read more about healthy living in this month’s Radish Magazine.