Don’t fret, though. You can spend the morning and early afternoon in Linn County, before heading over to Johnson County, which is experimenting with a new day and time for its walk.

“This year, the tour is on a Saturday, not a Sunday, and we’re trying a new time, from 3 p.m. to 8 p.m.,” said Maureen “Mo” Harding, Project GREEN Garden Tour co-chairwoman. “The committee has considered this in past years but now we’re ‘boldly going forth’ to give it a try.”

Six gardens in the northeast Iowa City area will be featured, from delightful small gardens within the city to vast properties out in the country. See map, below.

The Linn County walk will be 10 a.m. to 4 p.m. the same day, on July 12. Find more information about that walk here and read on for more from Project GREEN’s tour: 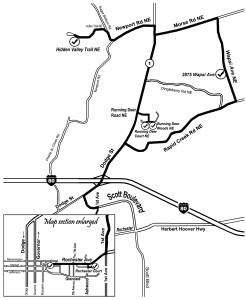 TICKETS: Tour-goers may start at any of the Iowa City gardens listed above to purchase a ticket/map that provides entrance to all the other gardens. Bring whatever may be needed—good shoes, a hat or visor, sunscreen, notepaper, pen, and a water bottle.

Janis Russell “takes her garden to work.” Depending on what is in bloom, her 40’x60’ property at 1107 Rochester Avenue offers up three-to-seven bouquets a week that are shared with co-workers and patients. Design and landscaped in 1998 by Iowa City Landscaping, Janis’ “small park” in the midst of Iowa City includes a small pond, gazebo, paths, benches, patio and of course, flower beds. Cut flowers from sunny perennials, annuals and vines join spring-to-fall flowering shrubs.

Fragrant roses, several hundred daylilies, hardy geraniums, coreopsis, orienpet lilies, clematis and buddleia shine from the difficult clay soil (where she has given up on echinacea, which hasn’t worked for her garden situation). Janis is very careful to stay organic, and does battle blackspot and Japanese beetles. But she may have come up with a beetle solution! Try spraying rose bushes directly with Bug Soother, the bug spray manufactured in Oxford, Iowa, that nearly all of us purchased for last year’s gnat invasion!

Janis’ garden does change each year when she rearranges plants to accommodate new plantings and experiment with design. A reevaluation of each season’s success occurs every autumn in preparation for the next year’s inspiration. After all, Janis believes that gardeners will always find the bright side!

J. Patrick and Betty White moved to their favorite eastside neighborhood at 2034 Rochester Court in the fall of 1990. Pat and Betty brought with them an assortment of hostas, daylilies, and most importantly, a peony recommended by Nancy Sieberling during a Project GREEN sale in the late 70s or early 80s. It is still thriving!

The Whites’ pie-shaped lot sits at the end of a cul-de-sac and offers half shade / half sun, perfect for hostas and daylilies—both of which exist in numbers approaching 100 varieties! Fred McDowell was their primary source and teacher. A magnificent Golden Sculpture hosta greets visitors and points them toward a brick path to the backyard bordered by a mix of hosta and other shade plants. A semicircular bed along the rear of the three-season porch includes favorites such as the hostas Abiqua Drinking Gourd and Montana Aureo-Marginata, plus Little Midge sedge with its striking geometric leaf pattern.

Significant terracing accompanied the 1965 building of the house, and the resulting slopes were tamed with timber and limestone retaining walls. Two daylily beds and a hillside populated by daylilies and asiatic lilies create a riot of color. Delightful wren families make their home in this garden each year from late spring through summer, and hopefully the commotion of the tour won’t make them too nervous! By July, Pat will have installed a climbing rose to replace an old lilac, and Betty will have expanded her fairy garden from a miniature Irish cottage on the deck to a former bed of impatiens.

Dorothy and Don Fowles have been gardening for the past six years on 1.8 acres ringed by wildflowers at 4655 Running Deer Woods NE. Trial and error filled the first years while assessing growing conditions from sun to shade, pruning or removing overgrown bushes and trees, installing walls, grading and seeding a 30’x60’ game area, and planting over 30 trees! They describe the planting layout in most of the beds as their “happenstance design.”

A considerable slope from the road to the back of the lot has been transformed by installing ornamental retaining walls by the house and along the game court. Visitors are welcomed to the Fowles’ property by a street-side row of peonies, yellow-twig dogwoods and other trees. Several perennial beds have been under development, now filled with hostas, daylilies and self-seeding perennials. Three small raised beds offer a plant rotation area for tomatoes, and low-growing grasses are being established as transition edging between the game court and wildflower area.

A wide range of soil and water conditions plus a serious wind factor has joined forces with deer, rabbits and other wild critters to test these gardeners! Along the road, heavy runoff caused major erosion, but now vinca minor (replanted three times) backed by metal edging is finally helping to ground the plantings. To diversify the wildflower cultivars, native seedlings and transplants have been scattered throughout the meadow, divided by mowed service paths and trees that create a fun hide-and-seek area for their young friends.

Emil Rinderspacher and Susan Goodner are right next door at 4649 Running Deer Court NE. Eighteen years ago when they were looking for a place to build a new home, Emil was a flower gardener so he wanted a sunny spot. They settled on a 1.5 acre, bare and rectangular lot two miles north of Iowa City.

Emil put together an ambitious landscape plan and started to work. Facing new challenges in the country, he struggled with depleted soil, herds of deer, voles, rabbits and winter winds. He has planted over 60 different kinds of trees and shrubs on the property. In addition, huge beds and borders have been developed and packed with perennials, annuals, roses, bulbs, grasses, tropical, shrubs and dwarf conifers! This garden is designed to bloom from early spring to frost and incorporates garden art and seating throughout.

Emil is a former chair of the Project GREEN garden tour, and his garden has been featured on several local tours including the Project GREEN tour, the Upper Midwest Master Gardener Tour, and most recently, the Iowa Garden Rendezvous. Eighteen years ago this was a cornfield. Now it is a garden showcase!

Diane and Larry Allen (Diane is Project GREEN’s very own co-president)built their home in 1993 at 2752 Hidden Valley Trail NE in Solon, a two acre lot that hosted only a few trees and clay soil. Today their yard is bursting with life and color. They started small with a single bed (30’x8’) in their backyard and filled it with perennial favorites. Very soon it was evident that the deer and rabbit population needed to be addressed. After much expert advice, tears, research, trial and error and cases of Liquid Fence, over two dozen flowerbeds now surround the Allens’ house where a truce has been declared with their four-legged neighbors.

The garden beds are connected with metal arches covered with clematis. The backside of each bed has plantings to discourage invasions—boxwood, a variety of grasses, Russian sage, Walker’s Low catnip—all beautiful plants with a job to do. A northern hillside has five annual beds, three beds devoted to cut flowers, and two beds filled with Larry’s Fort Knox-protected tomato plants. The gardens are covered with over 50 tons of Iowa City Landfill’s “black gold” compost.
Trees and shrubs are plentiful, with property lines of lilacs or mass plantings of daffodils and miscanthus. The woods are teeming with red bee balm, and inside the yard’s perimeter are river birch, pagoda dogwood, redbud, Japanese lilacs, magnolias, a Princeton gold maple, bottlebrush bushes, crabapples, hydrangea, and much more. Fountains, whirligigs, and garden art punctuate the colorful landscape.

Al and Diane Williamson’s scruff-covered, weedy and nearly tree-less hillside pasture was purchased in 1981. Over 33 years they have transformed their property with hard work and a passionate love of gardening. In 1988, the Williamsons opened their property for their first time on the Project Green Garden Tour, but much has changed since then!

Today the property features hundreds of trees, with at least one new tree added every year. Rapid Creek forms the southern property boundary—a very pleasant view from the front deck—and they maintain and mow approximately a ¾ mile of walking trails through the woods. A small pond features a bridge and island where Canadian geese have successfully nested for many years and is landscaped with naturalized daffodils, yellow flag and siberian iris, decorative grasses, day lilies and lythrum. Several garden beds include full sun and shade perennials, terraced areas, a woodland garden, water gardens, and a traditional vegetable garden.

Non-hardy bulbs that must be dug and stored each winter add unusual foliage to the gardens, along with tropical plants such as passion vines, brugmansia and bouganvilleas that add to the eclectic nature of their gardens. The hybrid iris collection is extraordinary, plus over 50 varieties of daylilies are interspersed throughout the beds. The hosta collection has taken a real hit because of Iowa’s unpredictable weather over these last two summers, but the collection still features countless varieties. Brilliant color is maintained from early spring through late fall!