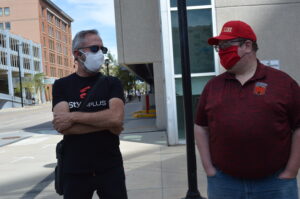 Cedar Rapids has a new face mask mandate that goes into effect immediately on Wednesday, Sept. 2, 2020, to protect the health of residents and visitors. (photo/Cindy Hadish)

Even as a White House task force recommends a mask mandate for the state as coronavirus cases surge in Iowa, Gov. Kim Reynolds remains among the last holdouts, but on Wednesday, Sept. 2, Cedar Rapids Mayor Brad Hart issued his own proclamation for Iowa’s second largest city.

“New positive cases of the virus continue at an alarming rate in the state of Iowa, Linn County, Johnson (County) and in the City of Cedar Rapids and other surrounding areas, putting the health care system and City residents in immediate danger and with no end in sight to the situation,” the proclamation states.

The order, which requires anyone ages 2 and older to wear a face covering while out in public, goes into effect immediately and includes stores, public transportation, restaurants, bars and other public settings.

Violators can be charged with a misdemeanor, seen as a last resort. Exceptions are made for health considerations, such as people using oxygen therapy.

The proclamation also exempts law enforcement, firefighters and emergency medical personnel and does not apply to people traveling in a vehicle alone or with members of the same household, or to people jogging or biking.

More: What you need to know about the Cedar Rapids mask mandate

“Unfortunately, we have continued to see an increase of cases throughout Iowa including neighboring counties Johnson and (Black Hawk,) making a mask mandate more critical than ever to slow the spread in our community,” the Cedar Rapids website notes. “A requirement of face coverings is essential to reducing the risk of transmission of COVID-19, and necessary to protect the health, welfare and safety of residents and visitors.”

During a Sept. 2 press conference, Reynolds replied to a reporter’s question about Iowa State University’s decision to allow 25,000 fans to its opening football games in Ames — a worldwide epicenter of new coronavirus cases — by saying it could be done “safely.”

“If you don’t think it’s safe, don’t go,” Reynolds said. Just hours later, Iowa State officials reversed the decision and said no fans would be allowed in the stands for the Sept. 12 game.

Last week, Reynolds ordered the closure of bars in six counties, and “strongly encouraged” Iowans to wear face coverings, but fell short of a mask mandate.

At the time, she stated that mandates by cities are unenforceable. The Cedar Rapids proclamation cites Iowa Code Section 372.14(2) and the Cedar Rapids Municipal Code, which grant the mayor powers in emergency circumstances “when public danger exists to take extraordinary steps to protect the public health and safety.”

Reynolds has pointed to young adults as the main contributor to the recent surge in cases, and said during the press conference that she would consider further measures beyond bar closings “if we don’t see that number come down.”

Counties with college towns have seen the biggest increase in positive cases, with reports of widespread flouting of social distancing guidelines.

As of Sept. 2, Iowa had 66,139 positive cases of COVID-19, up 691 over the previous day, and 1,125 deaths, up three from Sept. 1. Iowa’s coronavirus numbers have been called into question and Polly Carver-Kimm, former Communications Director for the Iowa Department of Public Health, recently filed suit in Polk County District Court alleging violation of Iowa’s whistleblower law.

She also filed claims against the State of Iowa, Governor Reynolds and Communications Director Pat Garrett with the State Appeal Board. The claims before the State Appeal Board allege that she was illegally terminated because of her persistent efforts to comply with Iowa’s Open Records law and that her firing violates public policy and runs afoul of her free speech rights.  Carver-Kimm and her attorney plan to discuss the claims on Sept. 3.

Related: Learn more about the bar closures in Iowa