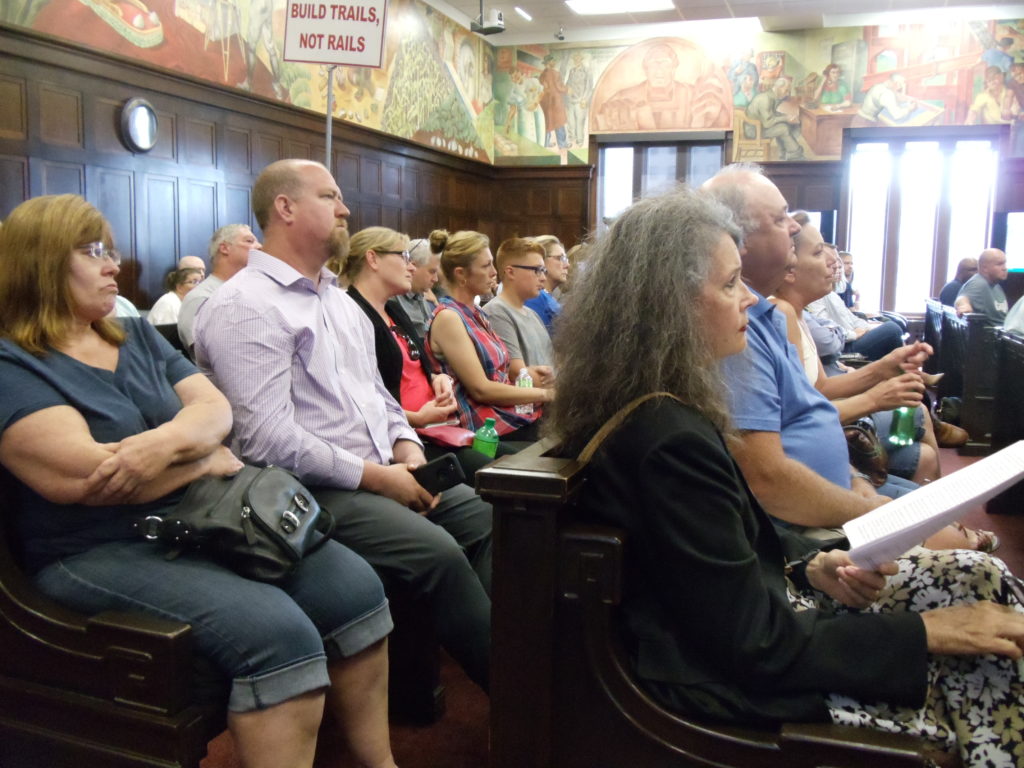 UPDATE: Following a public hearing, the Cedar Rapids City Council will vote Tuesday, Aug. 27, 2019, on allowing Cargill to build a railyard in a residential neighborhood. Unlike the typical rezoning measures that require the council to vote three times, designating an “essential service” allows the council to only vote once. The meeting is at 4 p.m. in City Council Chambers on the third floor of City Hall, 101 First St. SE.

CEDAR RAPIDS — Residents of the Rompot neighborhood near Prairie Park Fishery made their case today in front of the City Planning Commission against designating a proposed Cargill rail yard as an “essential service,” but in the end it wasn’t enough.

Commission members voted 5-1 in favor of the designation, which sends the measure next to the Aug. 27 City Council meeting.

“I’m really concerned with ramrodding this down the community’s throat,” said commission member Karl Cassell, the only dissenting vote. “If this is approved today and then (approved by) the council, there’s no going back.”

More than 50 people filled the City Council Chambers during the July 18 meeting, with 22 neighbors speaking against Cargill’s proposal and five speaking in favor, including former Mayor Ron Corbett, in his role with the Cedar Rapids Metro Economic Alliance.

Corbett cited property values of Coe College as the closest neighbors to a current rail yard to rebut the neighbors’ concerns about lower property values once Cargill builds its rail yard near their homes, a comparison the residents found hard to swallow.

“Their voices have been heard,” Corbett said, to audible gasps from the residents in the audience, who repeatedly pointed out they had not been invited to meetings with Cargill.

Cargill had previously  proposed building the rail yard, which would serve its Otis Road corn milling plant, on land formerly designated as a 28-acre wildlife refuge at Otis Avenue and Stewart Road SE.

Only on Monday did neighbors learn that the agricultural giant had moved its proposal nearby to a 24-acre site south of Otis Road and east of Prairie Park Fishery Road SE, still in their neighborhood. 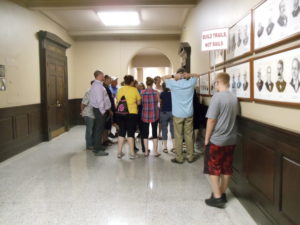 Neighbors gather in the hallway after the City Planning Commission’s vote. (photo/Cindy Hadish)

The land is zoned R-1, single-family residential, but by designating the rail yard as an essential service, Cargill can bypass rezoning the land to industrial and the measure will go to the City Council as a resolution that does not require three readings.

Neighbors at the commission meeting cited health and noise concerns, safety issues along Otis Road, and the disruption of their peaceful community should the rail yard be built near their homes.

Industrial activity would be allowed from 7 a.m. to 7 p.m., seven days a week, with another 10 exceptions beyond those designated times, in cases of adverse weather or other factors that would necessitate longer hours as Cargill sees fit.

City staff member Sandy Pumphrey pointed to Cargill’s 230 jobs at its Otis Road plant and the company’s concerns about remaining regionally competitive in the staff’s recommendation to approve the designation.

The proposed site is near Prairie Park Fishery, with trails and amenities used by thousands of anglers, runners, walkers, cyclists and bird watchers. Some of the neighbors noted that users of the fishery are likely unaware of Cargill’s plans and that wildlife in the area will be put at risk.

Cargill and city staff pointed to five community meetings, but residents such as Diane and Rick Stanek, whose Otis Road home was shown on maps next to the proposed site, said they were never contacted by the company.

“I knew nothing about those first four meetings,” Diane Stanek said, in tears. “That’s not being a good neighbor.”

Kerry Sanders, a resident who serves as a spokesman for “Build Trails, Not Rails” an effort to save the Prairie Park community, was only able to present part of numerous findings regarding noise and other elements of the proposal before his speaking time ended.

He noted that Cargill claimed in December to have put its proposal on “permanent hold,”  but continued to work with the city on the new location, just around the corner from the previous one, without notifying residents.

As of July 18, Nearly 900 people had signed a petition against Cargill’s proposal, posted on the Build Trails Not Rails Facebook page.

“Make other users of this nature corridor aware,” the post notes. “We are literally getting railroaded.”

Train tracks run next to Prairie Park Fishery in southeast Cedar Rapids, where Cargill hopes to build a rail yard next to a residential neighborhood. (photo/Cindy Hadish)