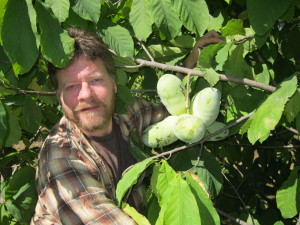 Chris Rice shows off pawpaws, a plant native to the Quad Cities area that would be one of the choices at a public edible forest. (photo/courtesy Chris Rice)

Chris Rice points to a community food forest growing near Monmouth, Ill., as evidence of an idea that works.

The forest, with shagbark hickory, hazelnuts, walnuts, pawpaws, American persimmons and more, was planted in 1967. As the concept finally spreads across the United States, the time is now to see a similar idea take root in the Quad Cities, according to Rice and other supporters.

To that end, advocates have scheduled their first meeting to form an organization that will work towards creating the first community food forest in the Quad Cities area.

Rice notes that members of the Master Naturalists and Master Gardeners will attend the meeting, along with the president of the Iowa Nut Grower’s Association who started the food forest in Monmouth, Ill., and many others. 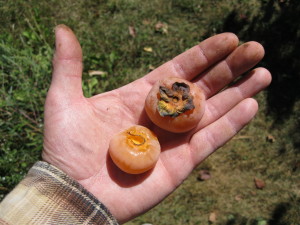 The American Persimmon (diospyros virginiana) is another likely candidate as part of a community forest garden. (photo/Chris Rice)

“The idea behind this is to take a small part of our food supply back from the corporate food paradigm and put it into the hands of the community,” he said. “A community food forest will be great for education, recreation, and quality of life in our community.”

People will be able to see all of the native fruit and nut trees in one place to try, Rice said,  and potentially take some tree seeds home to grow on their own property.

Much behind-the-scenes work has already been under way. Two facebook groups have been formed to keep supporters informed of meetings and other developments on the Quad Cities Food Forest Project:

Groups have toured the Monmouth, Ill., food forest, with photos available for viewing for anyone who joins the Quad Cities Edible Landscape Facebook Group.

A similar effort has been under way in Iowa City. Read more about what has been happening there: