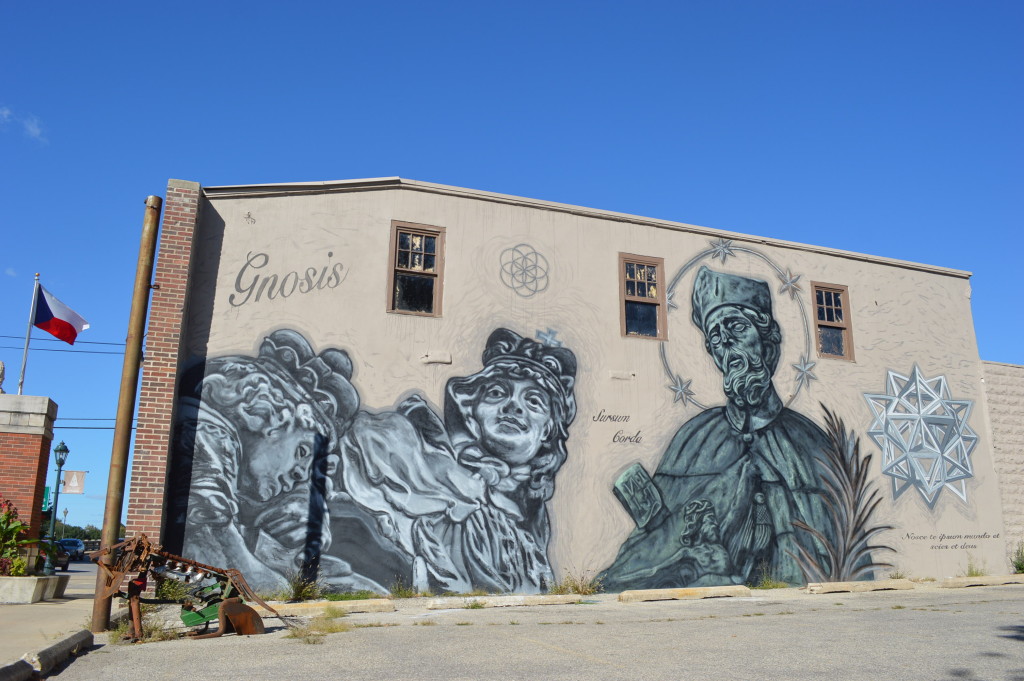 A mural on the Artisan’s Sanctuary in Czech Village was painted by Sirus Fountain during his residency in Cedar Rapids, Iowa. (photo/Cindy Hadish)

CEDAR RAPIDS –  Even before opening, an outdoor sporting goods store that could breathe new life into Czech Village has had cold water thrown on one of its decisions.

A mural depicting Czech patron saints, painted in 2014 by artist Sirus Fountain, was recently covered over with a new mural on the side of the forthcoming SOKO Outfitters store, at 41 16th Ave. SW.

The building previously housed the Artisan’s Sanctuary. It was during that time that the internationally acclaimed mural artist painted the side of the building with art depicting St. Wenceslaus, St. Ludmila and St. John, patron saints of the Czech and Slovak people. 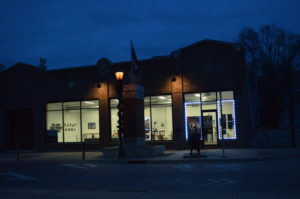 “The Village seems to be losing its connection to Czech culture and tradition,” said Jim Jacobmeyer, director of the Artisan’s Sanctuary, which has since moved to Marion. “I was surprised at the disregard for the artist, the community and the purpose of the artwork.”

Czech Village patrons have also weighed in on Facebook, with mixed reaction to the replacement mural.

The new mural, painted by artist Ely Sotillo, actually has been well-received, countered Steve Shriver, one of SOKO’s co-owners.

“We have heard great feedback from the general public on the new mural,” Shriver wrote in an email, noting that the design “speaks to nature, travel, outdoor recreation, and resembles wings when standing in the center of the wall.”

He added that the new mural already has been used as a backdrop for visitor selfies and senior school photos.

Shriver said the decision to paint over the Czech mural came when a local masonry company was hired to repair the exterior wall, in which the stucco was “badly cracked and contained major gaps allowing water to enter into the walls, which continued to degrade the wall.”

“In doing so it became clear there was absolutely no way to preserve the artwork,” Shriver noted. “We were saddened to lose the mural but chose to hire a local artist to paint a mural that will be engaging for visitors from all around.”

The building, originally home to the Kadlec Bros. dealership, which opened in 1925, and was later a Salvation Army store, was in poor structural condition, Shriver added.

“We had to completely gut the interior and rebuild all internal structures,” he wrote. “We invested a large amount of time and money, working with engineers, to make sure that the building was structurally sound. This included raising the roof to its original height, adjusting interior support structures, a new insulated roof, and sealing of the walls and floor.”

Jacobmeyer said he appreciated the work done to restore the building, “but I think the owners of the building were more concerned about commercial branding than public art.”

Learn about other Czech-related news in Iowa.

The sporting goods store is expected to open in September.

Shriver has said the name was originally intended as a nod to Sokol, a Czech gymnastics and social organization (Sokol is Czech for “falcon”) but the four co-owners then learned that soko was Japanese for “there,” which related to their business, in being “there” on customers’ adventures.

The new mural is shown on the side of the SOKO Outfitters building on Thursday, Aug. 30, 2018. (photo/Cindy Hadish)