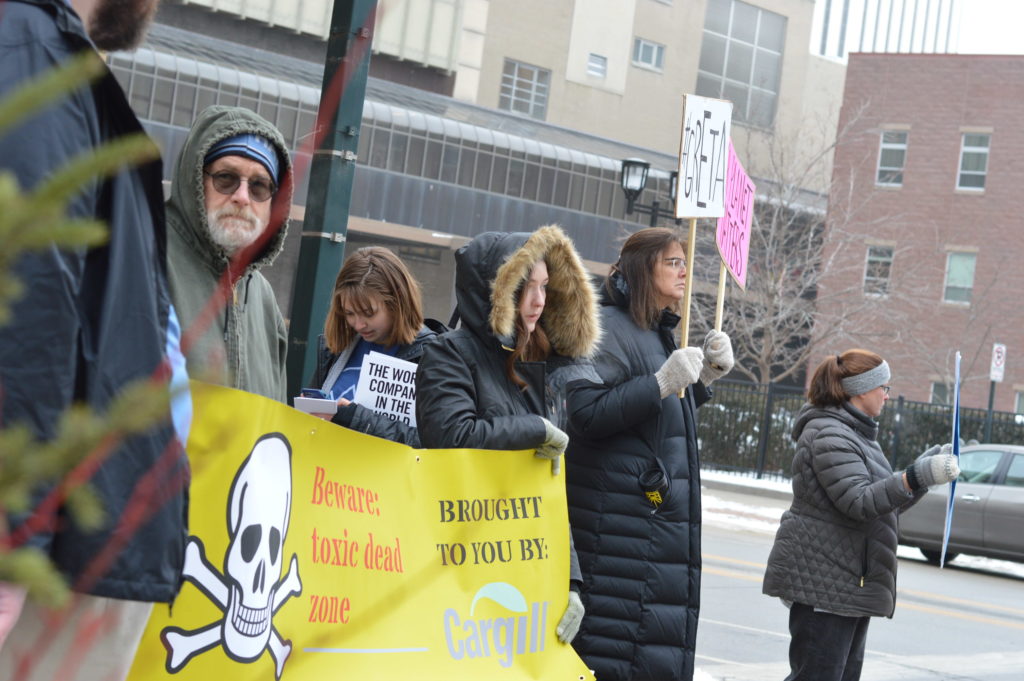 CEDAR RAPIDS — Protesters greeted the chairman and CEO of Cargill to Cedar Rapids with signs and chants against the global ag giant for its environmental track record.

Hosted by Mighty Earth, a global environmental organization that works to protect tropical forests, oceans and the climate, more than a dozen people demonstrated Wednesday, Jan. 29 in below-freezing temperatures across the street from the Convention Center and the Doubletree by Hilton in downtown Cedar Rapids. 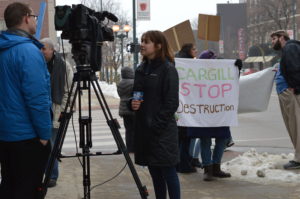 Dorothy Hogg is interviewed during the demonstration on Jan. 29, 2020. (photo/Cindy Hadish)

“What do we want? Climate action. When do want it? Now,” the group chanted.

David MacLennan, chairman and chief executive officer of Cargill, was the keynote speaker for the Cedar Rapids Metro Economic Alliance Annual Meeting, where more than 1,000 people were expected to attend.

The Annual Meeting is the Economic Alliance’s signature event and fell just weeks after the Cedar Rapids City Council voted to allow Cargill to build an industrial railyard on a designated prairie pollinator zone in the floodplain next to a residential neighborhood.

Despite pleas from dozens of residents and users of the Prairie Park Fishery, which will abut the forthcoming railyard, the council voted to rezone the 28-acre site from suburban residential large lot to general industrial and approved a development agreement with Cargill for the city-owned land, south of Otis Avenue, west of Cole Street SE. 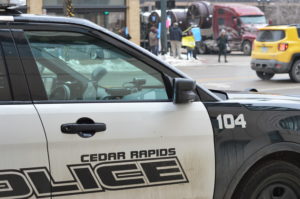 Cedar Rapids police maintained a heavy presence, but the demonstration was peaceful.

While MacLennan’s appearance was expected to address the importance of Cedar Rapids to Cargill’s business, demonstrators cited the privately owned company’s record of deforestation and other environmental disruption.

“Cargill is trying to build directly on a floodplain,” Mighty Earth noted on its Facebook event post.  “As Iowa’s very own catastrophes make clear, this is asking for trouble. The land was set aside for environmental preservation and pollinator protection — and building tracks there completely contradicts the very goals the area was designed to promote. The city council has failed to do its job, and has chosen to side with polluters over people.”

“There’s no question about whether Cargill will protect the community. They won’t,” the post said. “We just had to look at their record around the world to know what they’ll do to Cedar Rapids — exploit the resources and talent, and leave behind destruction.” 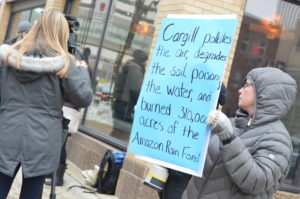 “Cargill has continually dragged its feet on promoting regenerative agricultural practices,” Mighty Earth continued. “As a result, the companies’ activities have resulted in polluted air, degraded soil, and agricultural runoff. This runoff has poisoned drinking water throughout the Midwest and caused the Dead zone in the Gulf to grow as large as New Jersey.”

“If Cargill is willing to burn down the Amazon and rip apart the Brazilian Cerrado, they will not hesitate to destroy prairie ecosystems, floodplains and pollinator habitat in Iowa,” Mighty Earth stated on Facebook.

Kerry Sanders. spokesman for Protect the Prairie Park Corridor and a resident of the neighborhood, said residents share Mighty Earth’s environmental concerns, but were at the event with their own priorities. 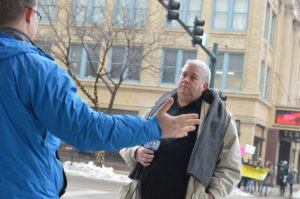 He sent the following open letter to MacLennan:

Mr. MacLennan –
As you are no doubt aware, Cargill’s attempts to build a rail processing facility in the middle of a quiet residential community and dedicated nature corridor have faced
significant controversy in Cedar Rapids over the past 18 months.

On paper, Cargill prides itself on adhering to a strong set of standards for ethical behavior. In reality, Cargill’s local management team has consistently worked well
outside these ethical guidelines in pursuit of a rail processing facility that has close to zero support among the 250,000 people that will be the most effected.

Despite the narrative from your local managers, there are numerous other options
available to Cargill to meet its rail car delivery needs that would allow it to operate at a
substantially lower price point than Cargill is currently paying for rail car delivery. Each
of those solutions would allow Cargill to avoid destroying one of Cedar Rapids oldest
communities, and turning a treasured nature corridor into a loud, noxious, toxic waste
dump. 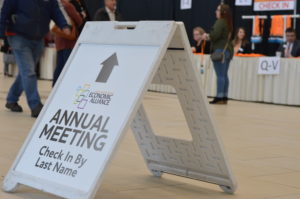 A sign points to the annual meeting of the Cedar Rapids Metro Economic Alliance. (photo/Cindy Hadish)

Cargill can protect jobs and foster a vibrant business model while still respecting the needs and concerns of the citizens of Cedar Rapids. Those two things need not be mutually exclusive. A pursuit of profits does not need to result in destruction of quality of life, or lead Cargill to completely abandon its core ethical principles.

We would welcome the opportunity to present to you the best of those options, and give Cargill an opportunity to rectify the grievous assault they have undertaken against the Prairie Park community. We ask as part of your address to the Metro Economic Alliance today that you commit to those discussions. It’s in Cargill’s best interests, and it’s the
right thing to do. 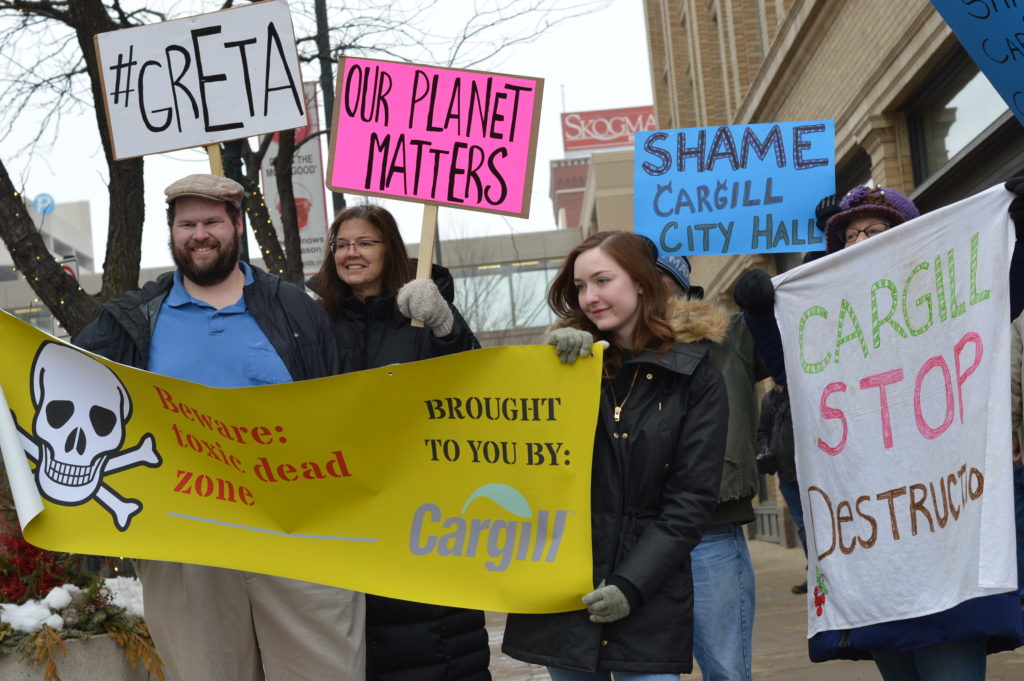 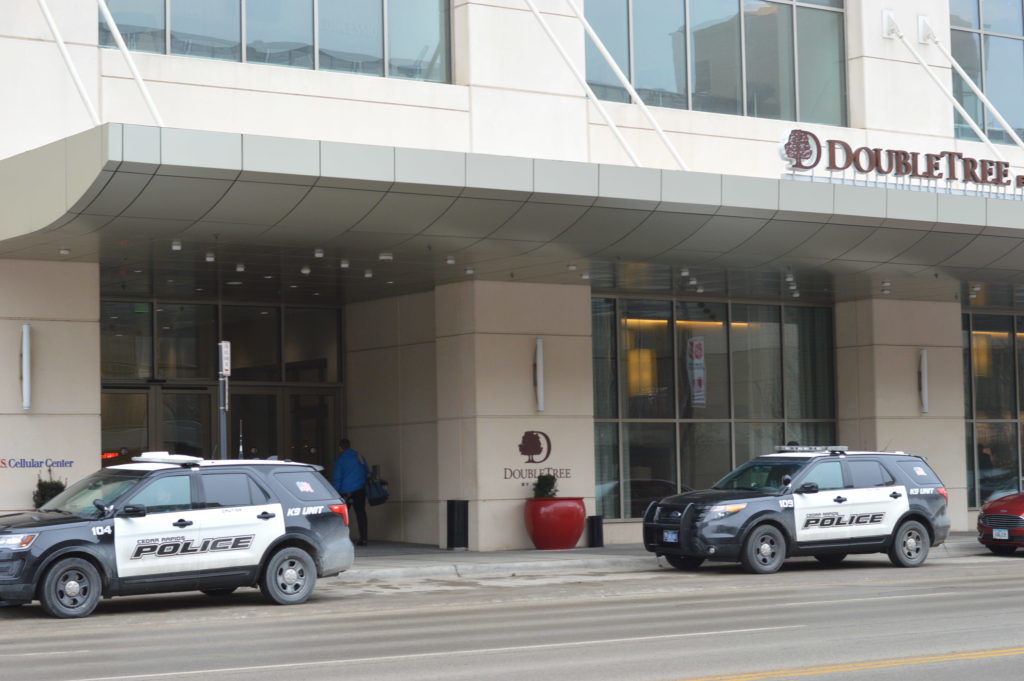 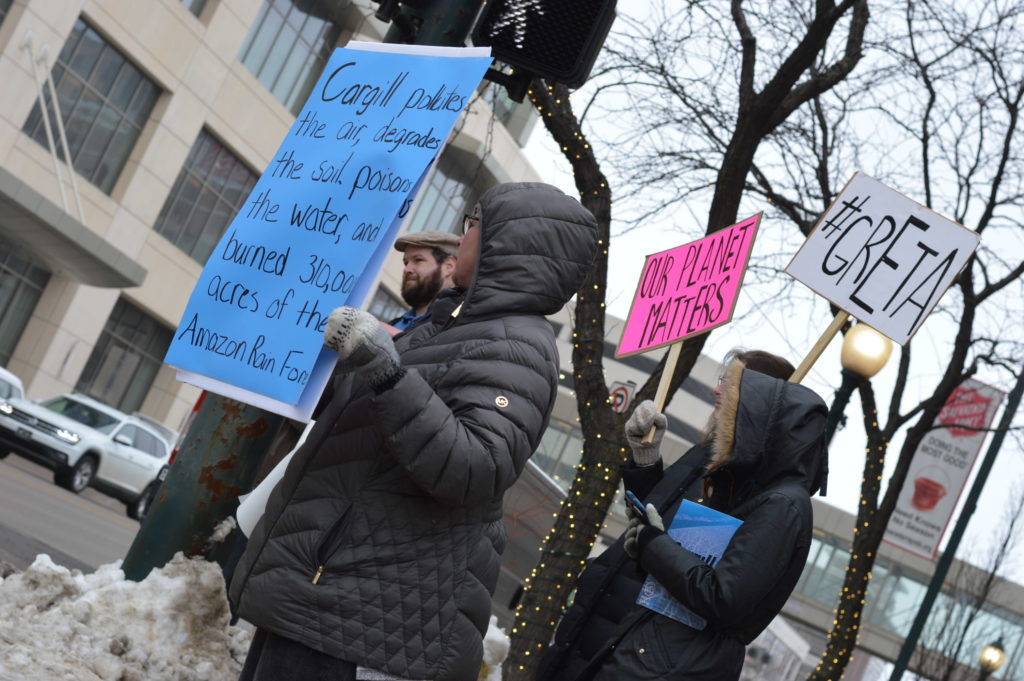 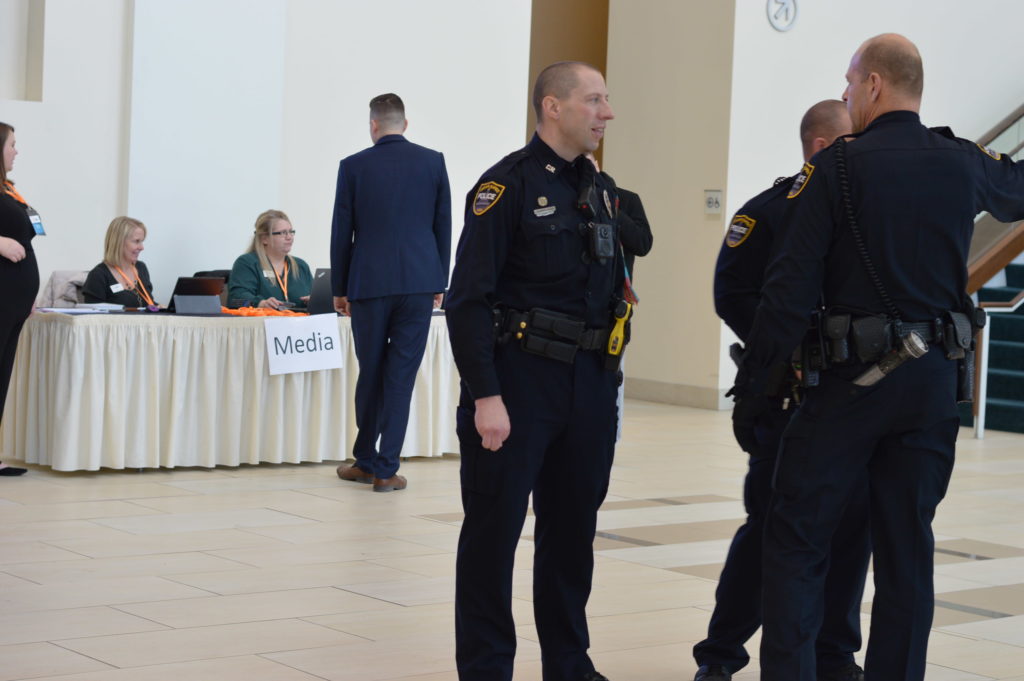 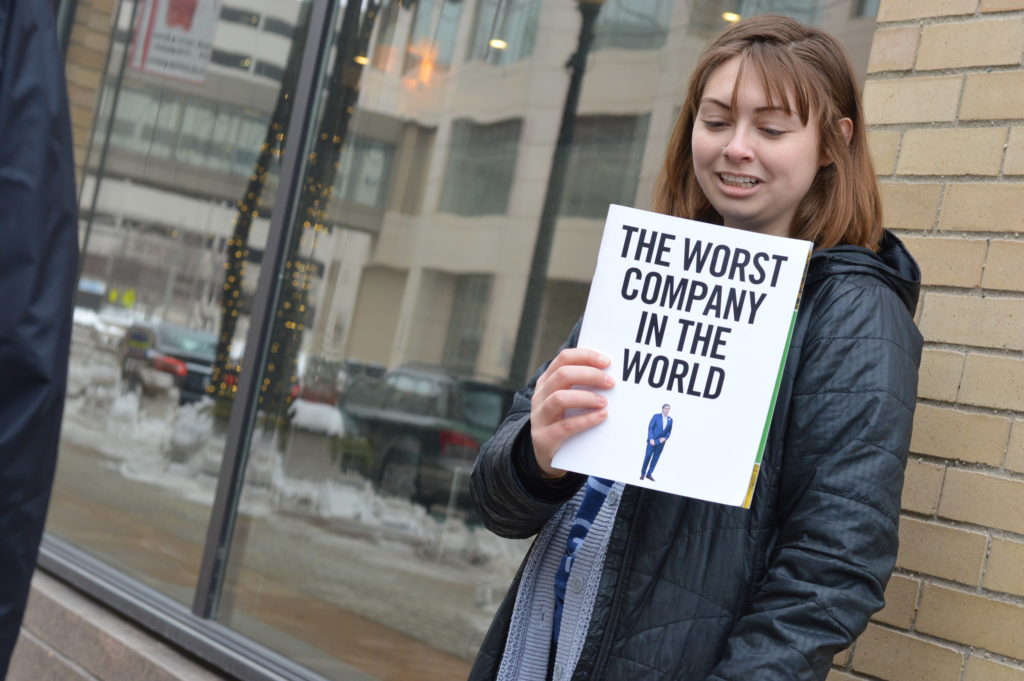 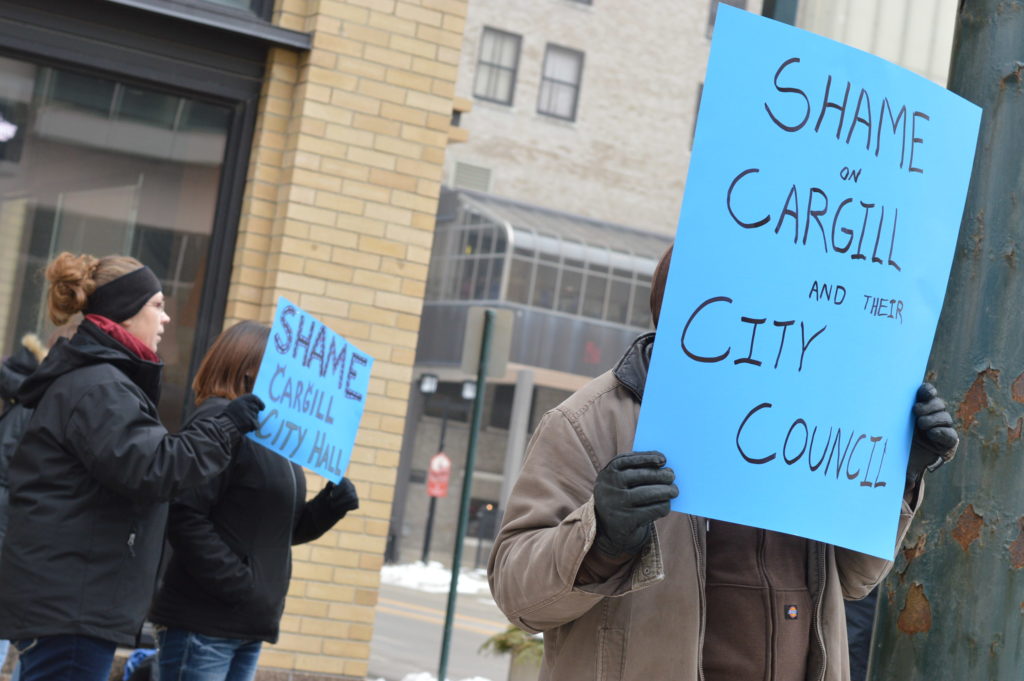