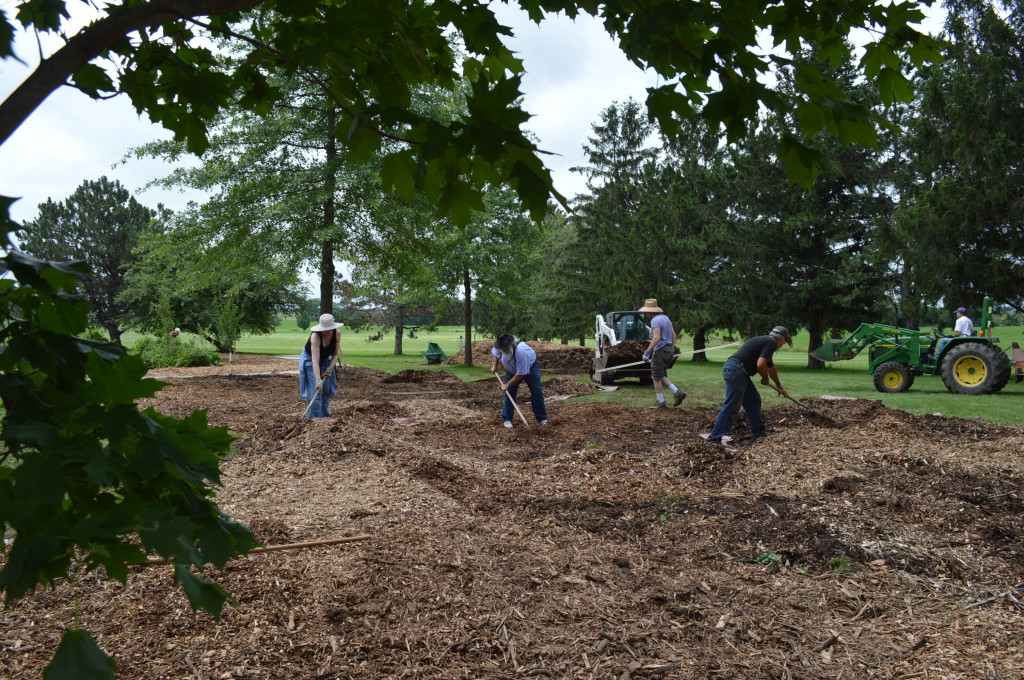 Volunteers with Backyard Abundance mulch the ground at Wetherby Park in Iowa City this summer  to prepare the soil for planting next spring. The park is the site of an edible forest, a movement that has grown in popularity in recent years, but traces its roots to ancient times. (photo/Cindy Hadish)

Rhonda Dunn is interested in growing food, but not the way her mother gardened.

“She’d till every spring and hoe it and weed it,” said Dunn, an Iowa City nurse practitioner. “That was the way she knew and it worked for her, but I don’t want to be out hoeing and weeding.” 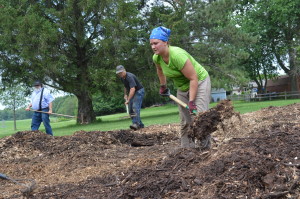 Mulch is raked into place during a Backyard Abundance mulching party June 28,  2014, at Wetherby Park in Iowa City. (photo/Cindy Hadish)

Dunn is among a growing number of people seeking a more harmonious approach through edible forests.

“This seems to be a better way to work with nature,” she said, while working alongside other volunteers this summer at the Wetherby Park Edible Forest in Iowa City.

The Wetherby Park initiative — spurred by Iowa City-based Backyard Abundance — and the Quad Cities Food Forest are among the latest efforts in the national edible forest movement.

Seattle’s Beacon Food Forest started in 2009 as a project for a permaculture design course and will eventually encompass a 7-acre site.

Cedar Rapids also made a start in recent years by planting trees at the Ellis Food Forest, an initiative of Matthew 25, a Cedar Rapids nonprofit, with help from Marion-based Trees Forever. Apples, peaches, pears and service berries have already been harvested from the former flood site, with plans to add strawberries and grapes.

While the elements in each project differ, the purpose of an edible forest is the same: to serve as a free, low-maintenance source of local, healthy foods from trees that produce fruits and nuts, berry-producing shrubs, and perennial plants, such as vegetables and herbs. Some also incorporate annuals. 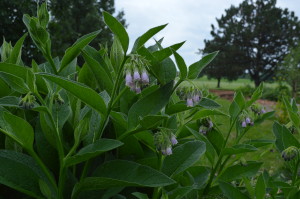 Comfrey is among the plants growing at the Wetherby Park Edible Forest in Iowa City. (photo/Cindy Hadish)

Though the Quad Cities project has just taken root this year, it’s an idea that founder Chris Rice has contemplated since childhood when he tried to grow trees by sticking apple seeds in the ground.

“It’s an ancient idea that’s used all over the world,” said Rice, who lives in Rock Island, Ill., and works as a carpenter in Davenport, Iowa.

While recent food forests try to stake claim as “first in the U.S.” Rice points to one started in 1967 in Monmouth, Ill., as the likely candidate for the title.

Gary Fernald grows shagbark hickory, hazelnuts, walnuts, pawpaws, American persimmons and more at the site, and is willing to share pecan seedlings and other plants to help start the Quad Cities Food Forest, Rice said, which will lower costs.

Volunteers will be needed to plant and help establish the trees and bushes in the first few years, he said, but once the plants mature, little maintenance is needed as the area becomes a woodland ecosystem.

Rice envisions using only native plants and sees the food forest serving as an educational tool, where residents learn what grows well in their climate and use seeds from the forest to plant at home.

The group, which includes at least 100 supporters, chose a preferred site for the food forest at a 5-acre, city-owned grassy field in Davenport that cannot be developed with buildings due to flood restrictions. Rice noted that ground breaking will take place Oct. 25.

In Iowa City, the Wetherby Park Edible Forest is an extension of the Edible Forest Maze, planted in 2011 as a project of Iowa City Parks and Recreation, along with AmeriCorps, Backyard Abundance volunteers and neighbors. The edible landscape includes herbs, gooseberries, comfrey and more. 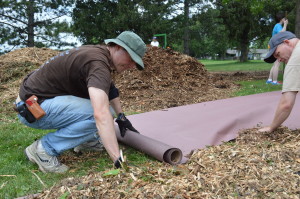 Backyard Abundance Director Fred Meyer points to research that shows children do not eat recommended daily servings of fruits and vegetables, but are likely to eat food they have planted or harvested. The same is true of adults.

The one-third acre site and other types of edible landscaping serve to decrease grocery bills and increase habitat for pollinators and other wildlife, Meyer added.

“This year, we’re laying the foundation, literally,” he said, as about 40 volunteers mulched the site this summer to prepare for planting in 2015.

Apple, pear, plum, cherry and mulberry trees, and aronia berry, currants and strawberries are among plants that will be added.

Both Meyer and Rice note that community involvement is vital.

“This is going to belong to the community,” Rice said.

FYI: Chris Rice notes that the Quad Cities Food Forest ground breaking will take place at the Black Hawk Gardens location on Garden Street in Davenport, at 10 a.m. October 25, 2014. City leaders are among those who will help dig and then plant 50 to 100 trees.

See more photos from the Wetherby Park Edible Forest, below, and read more about healthy living at the Radish Magazine. 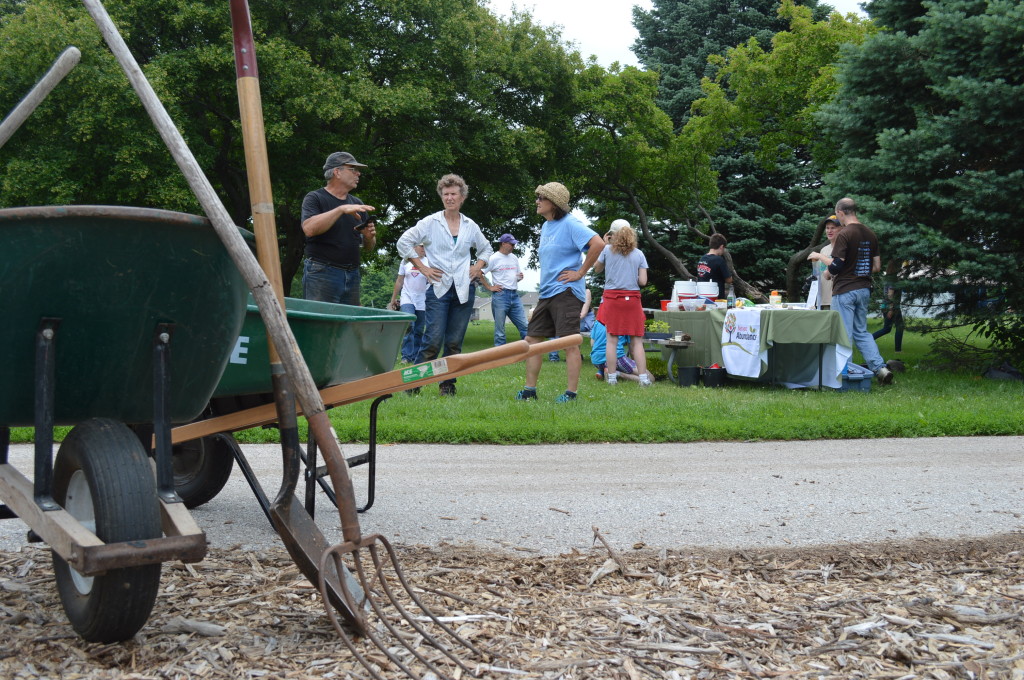 Volunteers with Backyard Abundance take a break from mulching at Wetherby Park in Iowa City on June 28, 2014. (photo/Cindy Hadish) 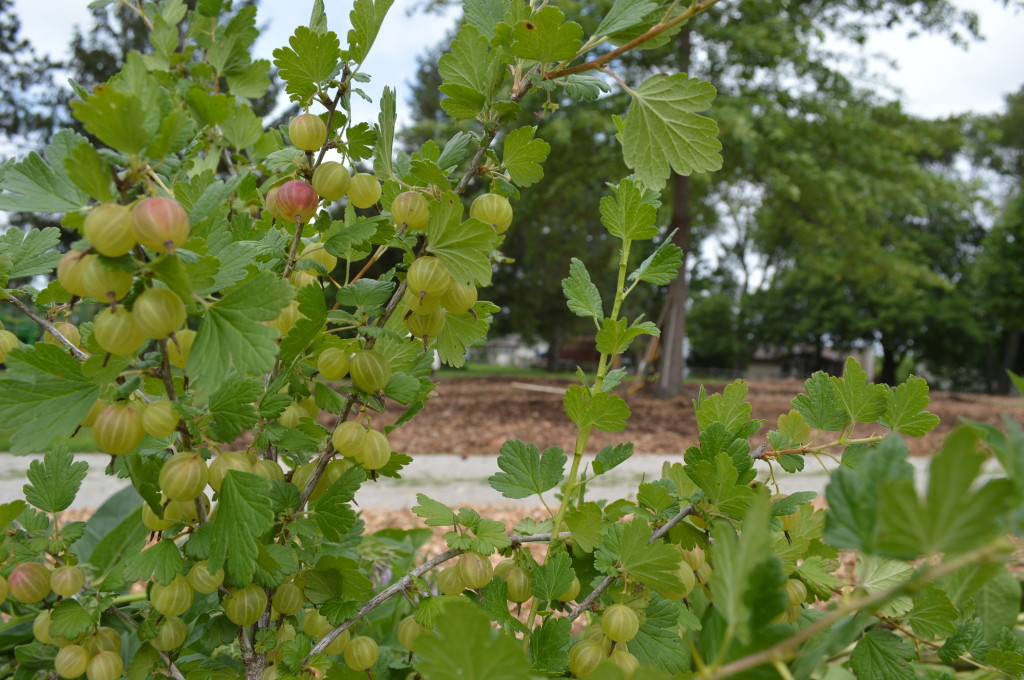