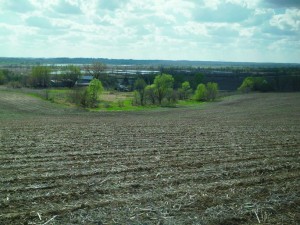 In speaking with Iowa Secretary of Agriculture Bill Northey last week, he mentioned that his favorite day of the year happens during the Iowa State Fair.

That’s when Northey has the honor of recognizing Iowa farms that have been in families for generations as part of the Century and Heritage Farm program.

Nearly two years ago, I was able to participate when my uncle, Craig Musel, received the Century award for his rural Chelsea farm. If you or someone you know might qualify for this honor, I would highly recommend it. It’s quite a memorable day.

Here is more about the award from Northey’s office:

Iowa Secretary of Agriculture Bill Northey encourages eligible farm owners to apply for the 2013 Century and Heritage Farm Program.  The program is sponsored by the Iowa Department of Agriculture and Land Stewardship and the Iowa Farm Bureau and recognizes families that have owned their farm for 100 years in the case of Century Farms and 150 years for Heritage Farms.

Farm families seeking to qualify for the Century or Heritage Farms Program must submit an application to the Department no later than June 1, 2013.

The ceremony to recognize the 2013 Century and Heritage Farms will be held at the Iowa State Fair and is scheduled for Tuesday, August 13th.