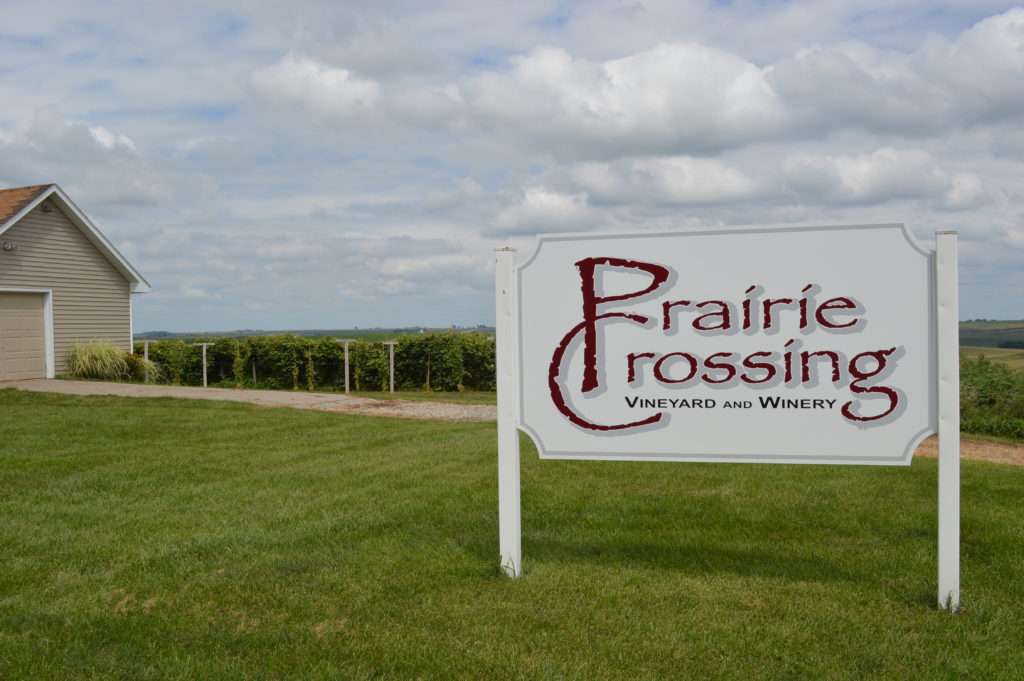 Wineries are among the attractions along the Loess Hills National Scenic Byway. (photo/Cindy Hadish)

Restaurants, such as The Grind Cafe and Lounge in downtown Sioux City and the quirky Dixie Quicks in Council Bluffs, dot the byway; a new American Viticultural Area designation shines a spotlight on Loess Hills wineries and vineyards; and a “Rural Ramble” last summer took participants to meet the producers of healthy local foods, including fruit, vegetable and dairy farmers. 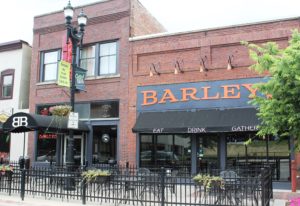 Located along Iowa’s western border, the Loess Hills National Scenic Byway stretches 220 miles from north of Sioux City to the Missouri border in the south. Loess, or soil deposited by ice age-winds, can be found across the globe, but Iowa’s Loess Hills are unique because the layers are extraordinarily thick; as high as 200 feet in some areas. Only in China can loess hills be found that are as extensive as those along the Missouri River Valley in Iowa.

The loess soil, while extremely fragile, can also be fitting for farming. Ditmars Orchard, a Council Bluffs orchard and vineyard with a strawberry and pumpkin patch, and The Swallow’s Nest in Council Bluffs, with gardens producing vegetables, fruits, herbs and flowers, were among the many stops on last summer’s Rural Ramble, a self-guided tour in Pottawattamie County, where visitors learned where their food originates and had an opportunity to experience life on the farm. 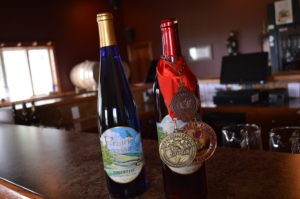 Julianna Hrasky, co-owner of Prairie Crossing Vineyard and Winery near Treynor, which also was on the tour, said the Loess Hills are prime for growing grapes. She cited the Prairie Crossing vineyard as extremely vigorous, with the first harvest taking place in 2007, just three years after the grapevines were planted.

Hillsides with stunning views of the landscape provide excellent sun exposure and drainage and the loess soil “is very unique,” Hrasky said. “We feel the composition does give our grapes and wines a distinct flavor.”

That distinction contributed to the recent American Viticultural Area (AVA) designation of the Loess Hills District, which spans 17 Iowa counties and portions of two counties in northwestern Missouri. The area includes the Loess Hills District Wine Trail, currently featuring nine wineries and vineyards. An AVA is a specific geographic area where grapes are grown for wine, with distinctive growing conditions, such as climate, soil, elevation and physical features. Wine labeled AVA is truly local, Hrasky noted, because it must be made with at least 85 percent local grapes.

“This region has such a huge grape-growing history that most people don’t know about,” she said, citing vineyards in the late-1800s into the early 20th century that made Iowa the largest grape-producing state in the nation. “When people think about Iowa, they usually just think of growing corn and beans. This designation calls attention to our industry.”

Janna Feldman, co-owner of Doe’s & Diva’s, offered another one of the stops on the Rural Ramble tour: a dairy farm that originated after she and her husband, Tom, discovered their daughter had allergies. 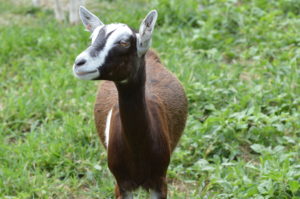 “I said, ‘I think a goat might help,’ and that’s where it started,” said Feldman, who makes soaps and lotions in addition to unique varieties of cheese from the goat and sheep milk. Cherry Horseradish Chevre, made with dried tart cherries and horseradish, is among the products produced on the farm, near Honey Creek, Iowa.

Feldman said the farm is the only sheep and goat dairy in multiple states and the cheeses are truly farmstead, made with milk solely from the animals they raise. Cheese is produced on-site by Tom and sold at local farmers markets. The chevre and feta also are used at Omaha’s Nosh restaurant and even in ice cream at Ted & Wally’s, also in Omaha.

Peaches, dill, basil and other fruits and herbs grown naturally on the farm find their way into the cheeses, making for unique taste combinations, such as peach rosemary cheese. Sheep produce tiny amounts of milk compared to goats, which, in turn, produce on a smaller scale than dairy cows. The animals need to be milked twice daily and cheese made either daily or every other day, depending on the season, which can make dairy farming an exhausting endeavor. Still, Feldman said, “I love what we do.”

In addition to the farms and food, visitors can encounter spectacular vistas on the byway at Preparation Canyon in Monona County. Other must-see stops include the Dorothy Pecaut Nature Center near Sioux City and the Hitchcock Nature Center in Honey Creek, which offer insight into the formation of the hills themselves and the amazing spectrum of wildlife that inhabit the Loess Hills.

History abounds at the Reverend Todd House – a stop on the underground railroad – on the southern edge of the byway; the Union Pacific Railroad Museum and General Dodge House in Council Bluffs; and the Lewis and Clark Interpretive Center and Sergeant Floyd Monument in Sioux City.

Other destinations, such as unique local restaurants, also serve as a draw for both visitors and prospective residents, said Mark Eckman, executive director of the Council Bluffs Convention & Visitors Bureau. 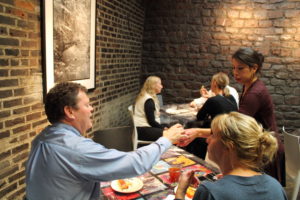 Eckman experienced that first-hand before moving to Council Bluffs when he visited Dixie Quicks in the city’s revitalized downtown. Owners Rob Gilmer and the late René Orduña started the restaurant in Omaha, but decided to move to Council Bluffs several years ago, featuring a blend of southern cooking with Cajun, Tex-Mex and Southwest elements and kitschy decor, such as doors hanging from the ceiling to reflect the past of the Dixie Quicks building.

Along with other locally owned and operated restaurants, such as the iconic family-owned Pizza King, Eckman said the establishments provide visitors with a slice of life.

“It gives them an unexpected twist to what Council Bluffs can offer,” he said. “It makes the city that much more appealing.”

Beyond the business aspect, the establishments provide a greater sense of community. That was readily apparent when chef Orduña was diagnosed with cancer in August 2016.

Katie Corzine, who had worked for Orduña at Dixie Quicks for nearly five years, said the outpouring from customers and friends was immediate and widespread. Benefits, such as a silent auction and an online fundraiser, worked to raise money for medical expenses and a steady stream of visitors stopped by to visit Orduña in hospice.

Reminders of that outpouring hung from the ceiling of Dixie Quicks in the form of paper hearts on which customers and supporters wrote messages and drew pictures for Orduña, before his death in November.

“He touched so many lives,” Corzine said, describing Orduña as a father figure to her and the rest of the staff, as well as someone who could calm a fussy baby by merely picking up the child and walking around the restaurant. “The customers are like family and the employees are even closer-knit.”

Find this article in the June 2017 issue of City Revealed magazine and read about other Scenic Byways in Iowa, below: 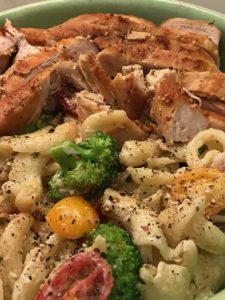 Cook noodles according to package instructions. Drain and set aside.

In a skillet, add olive oil and cook seasoned chicken breast in the oil until browned or about 6 to 8 minutes each side. Remove when cooked, cool then slice and set aside.

Add the chicken broth to skillet, stir then add chevre and stir again.

When cheese is melted, add garlic and rosemary. Simmer until sauce has thickened – about 10 minutes. 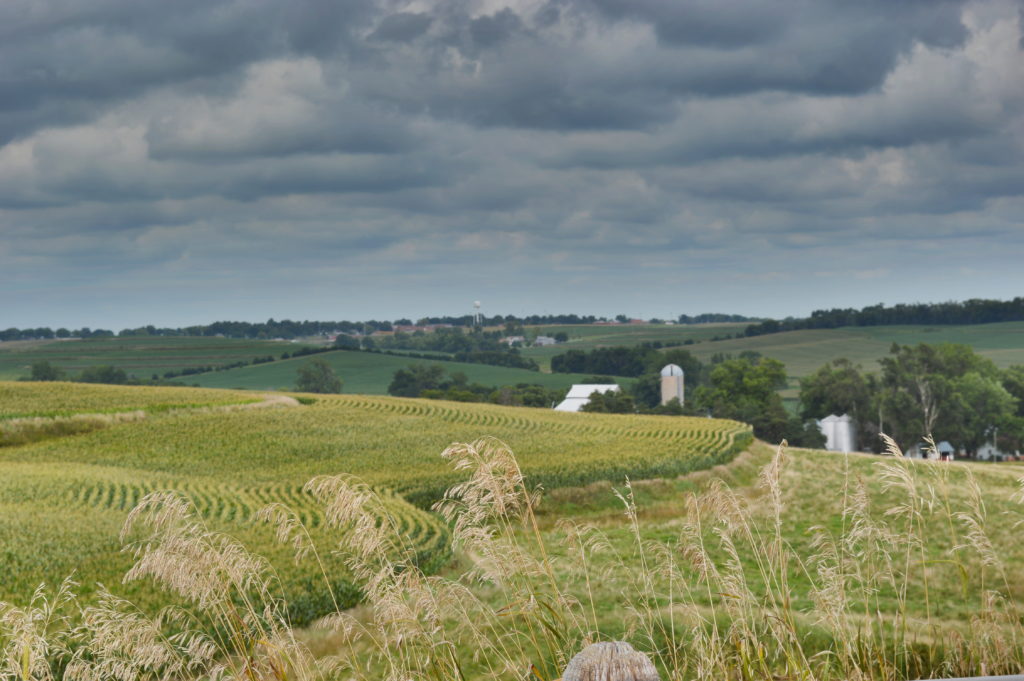 The Loess Hills National Scenic Byway stretches 220 miles from north of Sioux City to the Missouri border in the south. (photo/Cindy Hadish)