Find the “missing link” to health at farmers markets 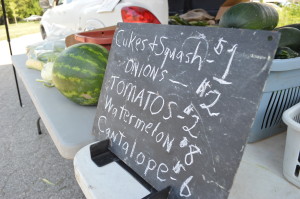 A sign at Henry’s Village Market in Homestead is displayed in late summer during the farmers market in the Amana Colonies. (photo/Cindy Hadish)

My hometown hosts one of the largest farmers markets in the Midwest, but the Downtown Cedar Rapids market’s sea of people, produce, products and pets isn’t for everyone.

The crowds that keep some people at bay, however, serve as a boon to the 200-plus vendors, many of whom tell me that this type of market — with upwards of 14,000 customers saturating the streets — is what keeps them in business.

At the same time, those farmers, bakers, gardeners and artists say they appreciate the slower pace of the area’s small-town markets, where they can chat with their customers and know many by name.

If only more people would take the time to visit their local farmers market.

As a youngster, I didn’t fully appreciate the Cedar Rapids Roundhouse, home to a thriving market where my mom would buy seedlings and other items to which I paid little attention back then. 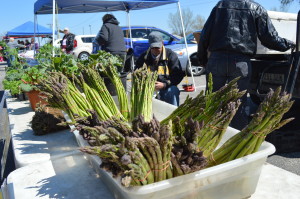 Asparagus, sold at the Hiawatha farmers market in April 2015, is among the in-season produce found at farmers markets at this time of year. (photo/Cindy Hadish)

Homegrown fruits, vegetables and other local foods were mainstays at our house, whether they were ripe berries picked from our backyard or meat and produce from my grandparents’ farm near Chelsea, home to some of the most fertile land in Iowa.

Limited time and a shady yard meant less of my family’s food was homegrown as an adult, and as I started reading food labels, especially through a decade of work as a health reporter, I began to see farmers markets as the missing link to that nutritious, fresh, local food that my brothers, sister and I took for granted as children.

Habits are hard to break. It might seem easier to buy a week’s worth of groceries at a super-sized store, but what are the long-term health consequences? Why not buy apples from market vendor Buffalo Ridge Orchard, knowing they’re grown a few miles away near Central City, rather than trying to read the tiny label to find the country of origin on a piece of fruit at a grocery store.

It doesn’t take a study to know fresh tastes best, but research does show that fresher food, eaten shortly after harvest, is more nutritious than items that have been sitting in a warehouse and shipped thousands of miles. The pesticides and other chemicals used on many industrial-style farms are another health issue of their own.

When I buy asparagus and carrots from Grinnell Heritage Farm’s market booth or spinach from Abbe Hills Farm near Mount Vernon, I know how those vegetables are grown. I’ve visited the farms and walked the fields. I’ve seen firsthand the tender care that Lois Pavelka of Pavelka’s Point Meats provides to her newborn lambs near Solon.

Buying farm-fresh eggs, produce, local honey, meats and dairy from area farmers not only provides healthy meals for me and my family, but a financial boost to those local producers. The $30 I might spend in one day at a market isn’t much, but multiply that times 10 or 100 and that grower or baker can stay in business doing what he or she does best. 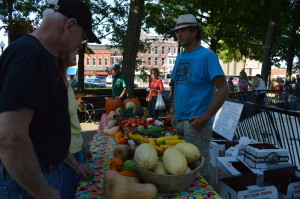 Many years ago, a friend told me in glowing terms about the farmers market in Washington, Iowa. It took more than a decade to make the trip, but I finally visited last summer.

Savory scents of grilled food wafted through the air, while bakers representing the area’s diverse ethnicities, and produce vendors hawking squash and other late-season vegetables surrounded the fountain in the town’s tree-lined park.

That bucolic scene, often accompanied by guitar players or other hometown entertainment, is replicated at markets I’ve visited in Oxford, Marion, Central City, Hiawatha and Homestead, Amana, among numerous others.

Those markets don’t have hundreds of stalls to meander through, but you’ll find a variety of produce at reasonable prices, with friendly vendors who can explain how their food is grown and answer other questions.

Every spring, I talk to market managers to compile a list of Eastern Iowa farmers markets, and each time, there are inevitably one or two that no longer exist; typically because the vendors didn’t have enough customers to make it worthwhile. Still, the list I post on my website now numbers over 50, and The Radish also publishes information on farmers markets in Eastern Iowa and Western Illinois, making it easy to find a market near you.

This season, make it a habit to regularly visit your local farmers market to find flavorful, fresh foods to benefit your own health and help keep your hometown market, and hard-working farmers, thriving.