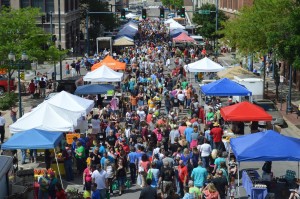 The Cedar Rapids Downtown Farmers Market will kick off its 10th season on Saturday, June 6, 2015, with a few changes. (photo/Cindy Hadish)

CEDAR RAPIDS – The Cedar Rapids Downtown Farmers Market kicks off its 10th season on June 6, with a major announcement noted during a press conference today.

The market, presented by the Cedar Rapids Metro Economic Alliance, will host its first-ever Market After Dark, from 7:30 p.m. to midnight on Saturday, Aug. 29.

“Not everyone’s a morning person, so this will probably draw a different crowd,” said Lizzy Dvorsky, 21, of Lizzy’s Face Painting, one of the vendors who has been with the market since its inception as a pilot project in 2006.

Dvorsky, who started as a market vendor selling jewelry at the tender age of 11, was one of the speakers at this morning’s press conference at the Cedar Rapids Metro Economic Alliance.

The family, including her mother, Marti Dvorsky, and sister, Staci Dvorsky, 18, now sells artwork and does face-painting at the market and Marti teaches art from a studio in Cedar Rapids.

“It’s been a wonderful experience, and fabulous for our family,” Staci Dvorsky said. 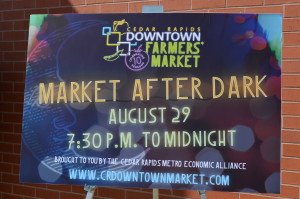 A new Market After Dark will be featured during the 10th anniversary season of the Cedar Rapids Downtown Farmers Market. (photo/Cindy Hadish)

Jill Wilkins, events planner for the Economic Alliance, said other farmers markets around the country have tried night-time markets.

Wilkins said the night market offers opportunities for festival lighting, a synergy with the downtown night life and other options that make it a perfect fit to celebrate the downtown market’s 10th anniversary.

The downtown market is the largest farmers market in Eastern Iowa, now averaging 14,000 visitors per market. More than 200 vendors fill the downtown streets each market day. Regular hours are 7:30 a.m. to noon.

Due to construction in Greene Square Park, the location is shifting one block away from the park this year, and will run from First to Fourth Avenues, between the railroad tracks and Second Street SE.

During the past nine years, the market has attracted more than 665,500 visitors to downtown Cedar Rapids, with 100,000 customers per season in the last four years, said Randy Rings, chairman of the Downtown Self-Supported Municipal Improvement District.

Rings added that visitors return to the downtown to see shows at the Paramount Theatre, U.S. Cellular Center and Theatre Cedar Rapids.

Cedar Rapids Mayor Ron Corbett noted that 14 Downtown Farmers Market vendors have gone on to open “brick and mortar” businesses, and during the past nine years, more than 600 vendors have participated in at least one market.

“It’s a milestone year for the market,” said Doug Neumann, Economic Alliance executive vice president, citing the growth from 50 vendors lining three blocks to more than 200 in a 10-block area.

Twenty-two of the vendors have been with the market since its inception and more than 30 new vendors will be added this season.

Neumann said the market’s economic impact during the past nine years is estimated at $10.3 million, most of which is from vendor sales.

The organization funds the markets through sponsorships and grants from hotel-motel taxes, as well as from its regular budget.

For a list of more than 50 markets in Eastern Iowa, with times, locations and more information, see the Homegrown farmers market list.