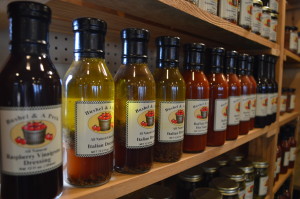 With their store shelves lined with local foods, Dave and Cookie Cole, owners of Bushel & A Peck, hope to keep things dry this year. Their store has flooded nearly every year since they have been at this location on Manchester’s Main Street. (photo/Cindy Hadish)

It was a white-knuckle drive home from Manchester to Cedar Rapids late Sunday afternoon, with torrential rains, tornado warnings and blindingly bright flashes of lightning.

With rain forecast for the next four days, the fear of flooding is on the minds of many Eastern Iowans.

In Manchester, I stopped at Bushel & A Peck, a great little local foods shop, where co-owner Cookie Cole was hoping the Maquoketa River would stay at bay.

In the seven years she and husband Dave have been at their location at 401 West Main St., their store has flooded nearly every year, compared to just two times over the course of decades for the previous owner. 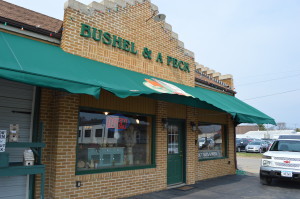 The owners of Bushel & A Peck in Manchester, Iowa, hope the Maquoketa River stays in its banks, with rain forecast for the next several days. (photo/Cindy Hadish)

Most memorable was 2010, when they were preparing for RAGBRAI riders to come through Manchester, only to have nearly 4 feet of water deluge their shop. Watermelons and other food they had prepared for the festivities could be seen floating down Main Street.

Cookie said this year, they’ve tried to prepare for the worst with a berm around their store, and she’s hoping for the best, despite the possibility of 4 inches of rain coming to Eastern Iowa over the next several days.

The latest state water summary from the Iowa Department of Natural Resources showed above normal rainfall was received in Iowa over the last two weeks, with the statewide average at 2.3 inches, compared to the norm of 1.7 inches.

Here is more from that report:

For a more thorough review of Iowa’s water resource trends  through April 24, go to http://www.iowadnr.gov/watersummaryupdate.

The report is prepared by the technical staff from the Iowa DNR, the Iowa Department of Agriculture and Land Stewardship, IIHR—Hydroscience and Engineering and the U.S. Geological Survey, in collaboration with The Iowa Homeland Security and Emergency Management Department.