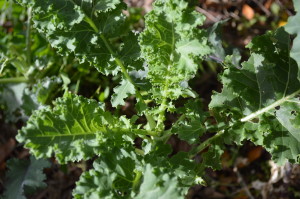 Kale is among the hardier plants that can survive a frost. (photo/Cindy Hadish)

Sometimes, we ease into the end of the gardening season with a light frost or at least warnings a few nights in a row.

This fall, we could get hit with both our first frost and a hard, or killing, freeze all in one swoop.

By some definitions, a hard, or killing freeze, happens when temperatures remain at a sustained 28 degrees, which appears likely.

Last year, we made it all the way to Halloween before the growing season ended.

While frost can hit Eastern Iowa as early as September, the warm, sunny days this October have made me complacent when it comes to gardening, so I’m caught off-guard a bit and will have to make a made dash Friday of picking my tomatoes and peppers and anything else that won’t survive into the weekend.

Hardier vegetables, like kale, should survive the frost and even a hard freeze. Temperatures will quickly rebound, so if you have plants in containers, you can move them into a garage or  porch where they will be protected and bring them back out once the chance for frost has passed.