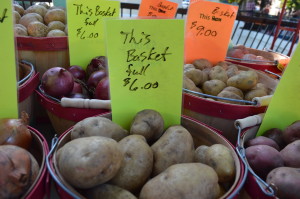 Gardening tradition calls for planting potatoes on Good Friday, but this year, at least in Iowa, that might not be a good idea.

With muddy grounds and temperatures still falling below freezing, this Friday, March 30, won’t be ideal for planting potatoes or much of anything else.

In general, potato planting requires soil temperatures above 45 degrees Farenheit, and this map from ISU Extension, as of this week, shows no areas of Iowa are quite there.