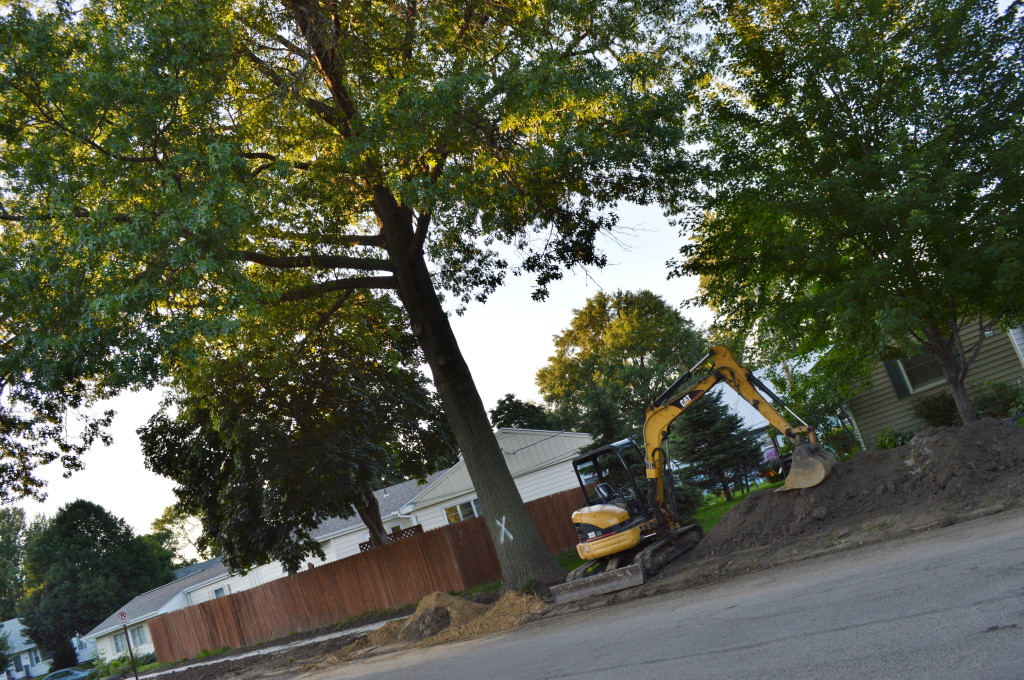 This mature pin oak will be removed in coming days to make way for a sidewalk in Cedar Rapids, Iowa. (photo/Cindy Hadish) 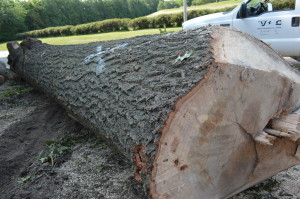 As of late July 2014, this is what remained of the oak tree. (photo/Cindy Hadish)

UPDATE: This photo (at right) shows what remained of the once-healthy oak tree as of the end of July 2014.

CEDAR RAPIDS — The Kell family is saying good-bye to their front-yard tree.

It’s not torrential rains, high winds or even a lightning strike that is spelling the end for the mature pin oak. This summer’s storms in Eastern Iowa uprooted and damaged a good number of trees, but the oak will be removed in coming days to make way for pavement.

A  “Safe Routes to School” program is funding the installation of sidewalks along Prairie Drive NE, where the Kell family has lived for the past 11 years. During that time, the oak, which sits on city right-of-way, has provided shade and more for their home, as it has for generations before them.

The healthy tree has also been a home and food source for the neighborhood squirrels, as well as other wildlife, Maria Kell noted.

“That’s what I really feel bad about,” she said. “To lose that tree and how it affects the animals and our immediate environment – it’s sad.”

Maria, her husband and their three children have taken pictures of themselves with the tree, which they estimate to be more than 70 years old, but haven’t been told exactly when it will be removed. A white “x” was marked on the tree weeks ago and the sidewalk has inched toward the oak in recent days.

The Kells advocated for installing the sidewalk on the other side of the street, along the campus of Mount Mercy University and Regis Middle School, which is devoid of trees, but were told the grade was flatter on their side, making it more suitable for the wide sidewalks. 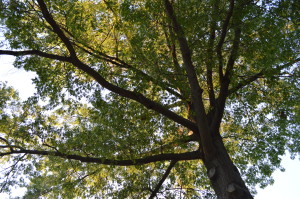 This mature pin oak in Cedar Rapids has been home to squirrels and other wildlife for generations, but will soon be removed by the city. (photo/Cindy Hadish)

City arborist Todd Fagan responded to an email about the issue and said the importance of keeping existing trees has been discussed.

He wrote that “there are several reasons why it was placed on the east side of the street (keep in mind these are federal govt./administrator/engineering reasons, not necessarily city arborist reasons):

1.       Topography: The area on the east side is flatter and therefore easier to install a sidewalk. Installing it on the Mt. Mercy side is possible but it would have required grading and additional costs; which I would have pushed for had it not been for the fact that….
2.       This sidewalk serves Franklin school, which is on the same side of the street. It also serves the residential homes on that side of the street. It somewhat defeats the purpose of a safe route to school if the kids need to un-necessarily cross the street twice.
3.       Finally, if/when Mt. Mercy or Regis ever develops the open land along the street, they will be required to put in a sidewalk. So the thought process is “Why spend the  funding for a sidewalk on that side of the street, let’s use it for the east side.”

Mount Mercy and Regis are private, so the “safe route” program apparently does not apply to students attending those schools.

Fagan said he has reviewed most, if not all of the tree removals for the project.

“We have removed a few undesirable trees and trees in poor condition,” he wrote. “One was transplanted. This oak was originally scheduled for protection and the sidewalk was going to curve around it. I forget why it was approved for removal, but I do remember looking at it and approving the action. It was regrettable—I don’t like to remove mature oaks and usually I’m pretty stubborn about it, but the reasoning behind the request was strong enough to be approved.”

The Kells and other homeowners were not assessed to pay for the sidewalk, which is funded through a grant, but assessments will be on the way for other sidewalks under the city’s new “complete streets” policy and sidewalk master plan.

Both were adopted this week by the Cedar Rapids City Council as a way to make the city more walkable and bicycle friendly. The minimum width of a sidewalk will increase to 5-feet; major street projects will be viewed with an eye toward adding bike lanes and other  modalities and sidewalks will be added where they currently don’t exist, said Rob Davis, a Public Works engineer.

The street design policy is modeled after Los Angeles County, California, and meets a criteria under the Blue Zones plan to work towards making Cedar Rapids a healthier place for residents.

Davis said 50 to 60 percent of the city doesn’t have sidewalks, so the master plan will include a list of priorities. In those cases of retrofitting sidewalks, the city and homeowners share in the costs, he said.

One resident whose home was flooded during flash floods in late June asked why the city isn’t considering using permeable pavement, which allows rainwater to soak through, rather than run off into the streets, along with rain gardens and other means to lessen the impact of heavy rains.

At this point, the city has not included those measures in its plans.

In the meantime, the Kell family is watching out their window to see when the tree will be removed and Maria Kell agreed that their children will eventually use the sidewalks to ride their bikes to Franklin Middle School. 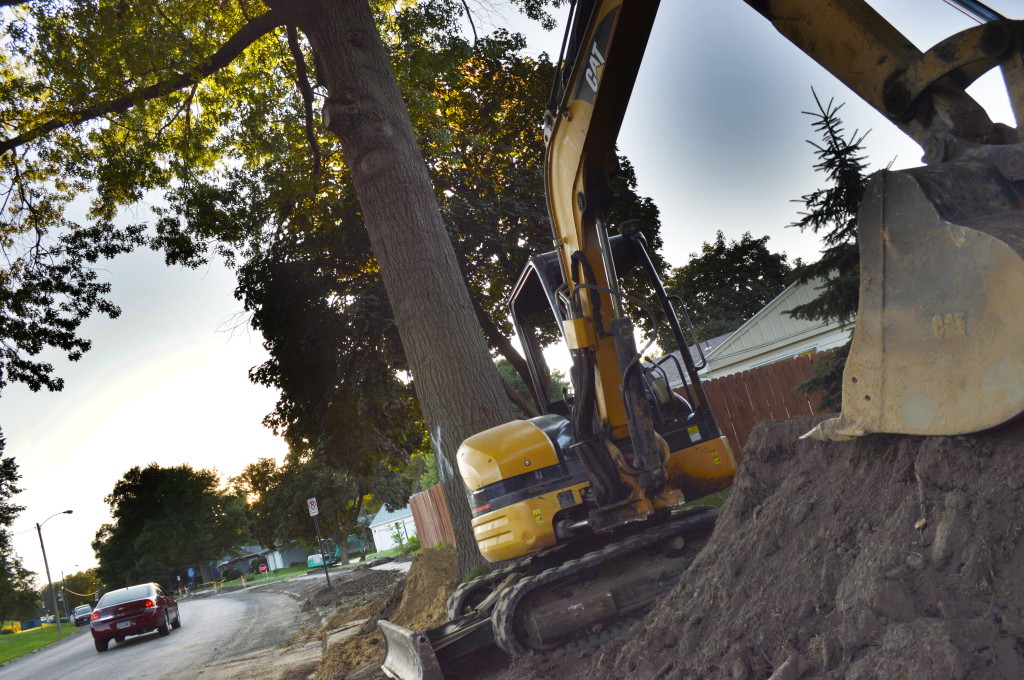 Heavy equipment has been inching toward the pin oak as sidewalk is installed along Prairie Drive NE in Cedar Rapids. (photo/Cindy Hadish)