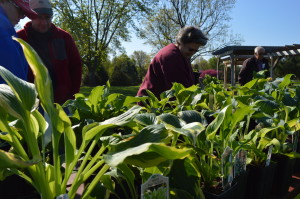 Customers select from a variety of hostas during the Harshbarger Hosta Society sale in May at Noelridge Park. A national convention from June 11-14, 2014, in Cedar Rapids, Iowa, will spotlight the nation’s No. 1 perennial plant. (photo/Cindy Hadish)

CEDAR RAPIDS — In the plant world, Iowa is known for much more than growing corn.

An international spotlight will focus on the state when Cedar Rapids hosts the American Hosta Society national convention from June 11 through June 14.

“We have people coming from all over the world,” said Judi Pohorsky, co-chairwoman of the convention and president of the Harshbarger Hosta Society, the Eastern Iowa organization that is hosting the event.

About 400 growers and enthusiasts from England, Belgium, Canada and the Netherlands among other countries, and numerous states, will converge on Cedar Rapids to judge, discuss and view the shade-loving plants.

Event co-chairwoman Nancy McWherter said she was surprised to see registrations from Florida.

“They don’t have hostas in Florida,” said Ms. McWherter, who is co-vice president of the group with her husband, Jay McWherter. “They can’t take the heat.”

That’s why places like Canada and northern states are meccas for hostas, which also tend to grow well in Iowa’s fertile soil.

The McWherters, who grow more than 700 varieties of hosta, have one of the sites on the convention’s garden tour.

Those tours, where visitors can view some of Iowa’s best shade gardens, are among the highlights of the convention, which also features a hosta show, judges clinic, plant auction and a tour of the Amana Colonies. Keynote speaker, Kelly Norris, horticulture manager at the Greater Des Moines Botanical Garden, is among several scheduled speakers.

Norris will give the keynote on Saturday, while Kathleen Ziemer, Josh Spece and Gary Whittenbaugh are scheduled to speak Thursday.

Pohorsky said the theme, “Czech It Out,” was chosen to reflect the high percentage of Czech ancestry in the Cedar Rapids population and as a nod to the National Czech & Slovak Museum & Library, where dinner will be held June 12 during the convention.

Jennifer Pickar, director of communications and marketing for the Cedar Rapids Area Convention & Visitors Bureau, said the hosta convention will bring visitors and their dollars to spend in Cedar Rapids.

“We are seeing a definite increase in interest in holding meetings and conventions here with all of the new projects and momentum our community has had over the last few years,” Ms. Pickar said. “It is great when these events attract attendees from other states and even other countries. Those visitors go home and spread the word about all there is to see and do in our community.”

Some of the events during the convention, including a cut leaf show and vendors showcase, are open to the public. Both will be at the Cedar Rapids Marriott, 1200 Collins Rd. NE, where the convention is centered.

Noelridge Park, just across Collins Road, is also among the garden tour sites, with structures added to the park in recent years to provide the shade needed for a growing hosta collection. 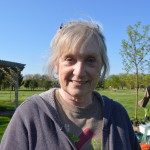 Ms. Pohorsky said hostas are the No. 1 perennial plant in the United States for good reason.

“People are landscaping more now and have less time to care for their yards,” she said. “When there is a shadier area where grass will not grow, hostas will thrive and are usually easy to care for.”

That easy care, along with the foliage colors, shapes, textures and varied sizes of each hosta makes the plant popular, she added.

Ms. Pohorsky, like many fans, began with the basics before becoming hooked on hostas. 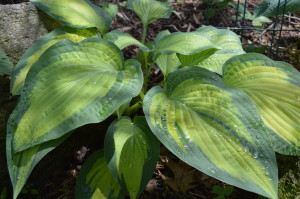 The hosta, Paul’s Glory, is shown after a recent rainfall in Cedar Rapids. The shade-loving plants grow in a wide variety of colors, textures, shapes and sizes, far beyond the traditional “green” hosta. (photo/Cindy Hadish)

“Great Expectations,” “Sun Power,” “Striptease,” “Guacamole” and “White Feather” are among the 7,000-plus varieties that go far beyond those “green” hostas that Ms. Pohorsky first owned, with variegated leaves and shades of blue, yellow and even white.

Bell-shaped flowers, generally in white or lavender, bloom in the summer, but the plants are best known for their foliage.

The Harshbarger Hosta Society is named for one of the early hosta promoters in Iowa, the late Gretchen Harshbarger, an Iowa City landscape architect who also was one of the founders of Project GREEN.

Ms. Pohorsky said she hopes gardeners with an interest in hostas will check out all that the convention and the Harshbarger Hosta Society have to offer.

“It all starts with the green one and the green and white one,” she said, “but when you introduce someone to the other 7,000 varieties, you have them hooked.”

Find more details on the National Hosta Convention and the full schedule at: www.harshbargerhostasociety.org

For a printed copy of this article, order the  June 2, 2014, edition of the Corridor Business Journal at this link.