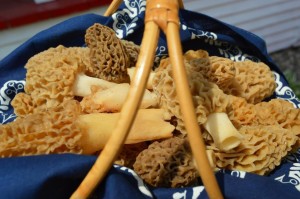 CEDAR RAPIDS – A chilly spring delayed the morel mushroom season in parts of Iowa, or so says my mushroom “source.”

Fortunately, some Iowans are finding them, as morels will be sold during the Houby Days festival this weekend in Cedar Rapids.

“We’re not going to make money on them, but it’s the idea that we’d like to have them here,” said Pam Lewis, president of the Czech Village Association, which sponsors the annual festival that celebrates all things mushroom.

The price hadn’t been set when I spoke to her, but it sounds like mushroom hunters who are finding morels are faring well financially and the morels that the Czech Village Association is bringing in for the sale are all coming from Iowa. A certified inspector, required in the state of Iowa, will take a look at the mushrooms before they’re sold, beginning Saturday at the information booth, near the Red Baron bar.

Houby Days (“houby” is the Czech word for mushrooms) begins this Friday, May 16, and runs through Sunday, May 18, in Czech Village, next to the Cedar River along 16th Avenue SW in Cedar Rapids.

Festival-goers can buy their mushrooms and eat them, too, as morels will be featured in the egg and houby breakfast, both Saturday and Sunday at Smuggler’s Wharf, 87 16th Ave. SW.

A morel contest is a mainstay of Houby Days, with prizes awarded for smallest, largest, most unusual and best display. Registration begins at noon Saturday.

While bingo was canceled and there will be no parade, thanks to city regulations that made the short jaunt cost-prohibitive, there will be a new parade of costumes, where people dressed in ethnic Czech kroje, or basically any costume, are invited to meet at 3 p.m. Sunday at the National Czech &  Slovak Museum & Library for a stroll through the village. The walk will be led by Janna Waters, Miss Czech-Slovak Iowa.

“Of course we love having the folk costumes, but it is kids day, so any costume is great,” Lewis said.

Also new this year will be a plant sale, with hanging baskets and bedding plants from a local nursery that will be sold both Saturday and Sunday on the Avenue.

Many other activities are scheduled throughout the festival, beginning with Taste of Czech & Slovak at 5 p.m. Friday. Kolaches, of course, will be available.

Find more on the kick-off event and the full schedule below:

$12 per person; ages 10 and under are free. Tickets are available at the door.

The NCSML Museum Guild’s Taste of Czech and Slovak once again kicks off the annual Houby Days weekend in Czech Village. This event is returning to the National Czech & Slovak Museum & Library for the first time since the Flood of 2008. Attendees will be able to sample more than a dozen entrees, salads, soups, and desserts! (To include garnet cookies, lemon poppyseed cake, and bublanina.) Lemonade, water, and coffee will be served. Kolaches, beer, NCSML Museum Guild aprons, and Guild cookbooks will also be sold.

The evening will also include a performance by Czech Plus Band in the NCSML’s outdoor amphitheater.