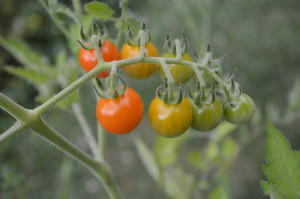 The Czech legend of the Three Frozen Kings warns against planting tomatoes and other tender plants before May 15. (photo/Cindy Hadish)

With frost warnings in some parts of Iowa, the Czech legend of the Three Frozen Kings is especially timely.

Hopefully, your plants will be safe, but just in case temperatures dip below freezing, you should cover any peppers, tomatoes or other tender plants that you’ve already planted outdoors.

My seedlings have been slow to grow this spring, so mine aren’t out yet and I usually do heed the Three Kings warning, regardless.

According to the Czech legend, the three kings or saints – Pankrac on May 12, Servac on May 13 and Bonifac on May 14 – were frozen when the temperature dropped while they were fishing at sea. On May 15, St. Zofie came along with a kettle of hot water to thaw out the three frozen kings.

The legend, brought to the United States by Czech immigrants, serves as a warning to protect tender plants against a possible late frost. In Iowa, it’s a good idea to wait until May 15 to plant your tomatoes, peppers and other tender vegetables and flowers, or at least provide them with protection in case overnight temperatures drop below freezing.

According to the forecast, we might not have a warm day until May 18, so perhaps waiting a little longer is warranted this year.

I’ve been asked about perennials and those are fine to plant in the ground before the last average frost date; maybe even preferable before the heat of summer hits, and we know that’s soon on its way.

It can also be helpful to know the average last frost date where you live. The National Climatic Data Center provides a chart.