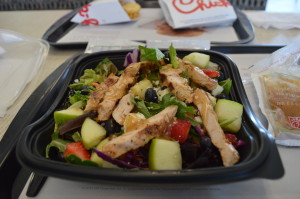 Chick-fil-A is moving towards 100 percent antibiotic-free chicken in its menu items. (photo/Cindy Hadish)

CEDAR RAPIDS – The wait is nearly over for west-side fans of Chick-fil-A.

The first 100 customers in line will win free Chick-fil-A meals for one year, but you have to act fast and live within eligible zip codes to qualify. 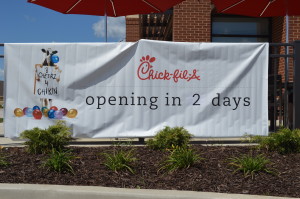 Brent Bundy, 26, and Jason Gardner, 39, both of Cedar Rapids, said they arrived about 7:30 a.m. to camp out, as they did for the opening of Chick-fil-A at Lindale Mall.

“That was in October, so it was a lot colder,” Bundy said, in contrast to Tuesday’s picture-perfect weather.

Gardner predicted that the crowds would arrive in late afternoon, as they had for the other opening in Cedar Rapids.

Owner/operator, Amgad Zaghloul, who left his job after 16 years at  Rockwell Collins, cited his entrepreneurial spirit among the reasons for switching careers. His family – he has three children under age 6 – and the leadership training from Rockwell also factored into his decision, he said.

So far, 83 people have been hired for the new location and applications are still being accepted. 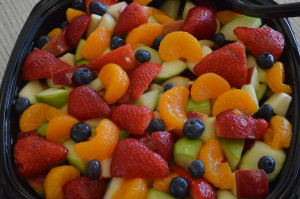 Fresh fruit salad is among the healthy options offered at Chick-fil-A. (photo/S. Bell)

In addition, the restaurant is the number one purchaser of boxed lemons, used in their fresh lemonade.

Of note, Zaghloul said the chain is working towards a goal of 100 percent antibiotic-free chicken by 2016. 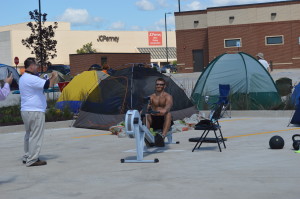 A customer waiting in line to be one of the “First 100” to win a free year of meals at Chick-fil-A works out in the parking lot of the new site on Edgewood Road SW in Cedar Rapids. (photo/S. Bell)

Find the list of eligible zip codes for the “First 100” here: www.chick-fil-a.com/Locations/Openings and see more about the Aug. 12 opening from Chick-fil-A:

Nearly three years after opening Cedar Rapids’ first stand-alone Chick-fil-A, the chain is back to open its newest location Aug. 12 at the Westdale Mall and is creating not only 85 new jobs but also the chance for 100 adults to win free Chick-fil-A meals for a year and the opportunity for community members to donate books that will benefit Taylor Elementary.

The newest Cedar Rapids restaurant is located at 2610 Edgewood Road., S.W., and will be owned and operated by local resident Amgad Zaghloul. 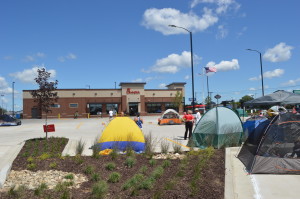 Customers camp out to be among the first 100 in line to win free meals at the new Westdale location of Chick-fil-A in Cedar Rapids. (photo/S. Bell)

After nearly 12 years and more than $25 million in free food given away, Chick-fil-A’s “First 100” celebration continues to be the chain’s signature grand opening event, which transforms the restaurant parking lot into a 24-hour community friendly party as the crowd awaits the opening.

The Westdale First 100 event will award more than $32,000 in free food. A digital offer card loaded with a one-year supply of free Chick-fil-A Meals (52 meals with each consisting of a Chick-fil-A Chicken Sandwich, medium Waffle Potato Fries™ and a medium drink) will be given to each of the first 100 eligible adults, ages 18 and older with identification, in line when the doors open at 6 a.m. on Wednesday, Aug. 12. If more than 100 people are onsite when the line officially forms at 6 a.m. on Tuesday, Aug. 11, then all 100 spots will be determined by a drawing held that morning with those selected needing to camp out for 24 hours to secure their spot. This community event is only open to guests residing in specific zip codes surrounding the restaurant. A complete listing of eligible zip codes and rules can be found at Chick-fil-A First 100 Promotion.

To celebrate the new Chick-fil-A restaurant and the Cedar Rapids community, Zaghloul is collecting new children’s books to benefit Taylor Elementary. The community is invited to bring children’s books to the restaurant during store operating hours from 6:30 a.m. to 10 p.m. on Aug. 12 and 13, as well as those attending the First 100 event. The books will be placed in a nearly three-foot Book House, created entirely from reclaimed wood and donated by the Chick-fil-A Foundation. 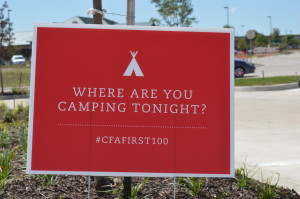 The opening is significant to those who shopped at the Westdale Mall as Chick-fil-A’s first location in Iowa opened there in October 1979. After 35 years, the Chick-fil-A closed in March 2014 with demolition of most of the mall which is being converted into a multiuse, outdoor lifestyle mall. Now once again, the community will be excited with seeing their Chick-fil-A back on Edgewood Road with the new restaurant featuring several upgrades and conveniences to create an even more remarkable customer experience.

The new 4,800-square-foot restaurant features an upgraded, heritage themed interior, complimented by an abundance of windows allowing plenty of natural light. The vintage-inspired interior includes a community table made of reclaimed timber and other unique custom features such as light fixtures made from recycled Coca-Cola bottles and peach baskets.
Customers will appreciate the new option of the dual drive-thru ordering lanes to expand the chain’s award-winning drive-thru service. Customers will also be able to stay connected through the restaurant’s free Wi-Fi, and parents will appreciate now having an indoor play area. The restaurant is open Monday through Saturday from 6:30 a.m. until 10 p.m., serving a full breakfast menu until 10:30 a.m. Like all Chick-fil-A restaurants, it will be closed on Sunday.

Zaghloul is no stranger to the Cedar Rapids’ area with ties that date back to 1997 when he would spend his college summers in a co-op work program at Rockwell Collins, one of the area’s largest employers. His talents, leadership and drive enabled him to advance within the fortune 500 aerospace and defense company to the position of director of cyber security, where he was responsible for overseeing the security and protection of all digital information. Zaghloul was looking for a change in his career that would enable him to engage his entrepreneurial ambitions and integrate his family more fully into his everyday work life. Becoming a Chick-fil-A Operator fulfills those desires.

With his parents having emigrated from Egypt, Zaghloul was born in the U.S. but spent most of his youth in Riyadh, Saudi Arabia where he attended and graduated from an American high school at the young age of 16 years. His many experiences in Riyadh included living there during the Gulf War. He is married to Jennifer and they have three children.

“Since opening his very first restaurant, Truett Cathy made personalized customer service and freshly prepared food the hallmarks of his restaurants,” said Zaghloul. “Guests at our new Westdale restaurant will appreciate all the new conveniences provided with this restaurant and can expect my team members to deliver those same remarkable experiences that they had come to expect at the former mall location for the past 35 years.”

Iowa’s first stand-alone Chick-fil-A restaurant opened in Davenport in October 2008. Three years ago the chain opened another three locations in the state including Cedar Rapids’ first stand-alone on Collins Road. Once again this year, the new Westdale location becomes the first of three to open in Iowa within eight weeks of each other. Additional openings are planned for West Des Moines and Ames and will bring the total in the state to seven stand-alone and four mall locations. The new Westdale Chick-fil-A on Edgewood Road is one of 88 new restaurants the chain plans to open across the country in 2015, creating more than 7,400 new jobs.

Perfecting a recipe his mother used in her Atlanta boarding house, Cathy first served his boneless breast-of-chicken sandwich, pressured cooked and served on a buttered bun with two crucial pickles, at his Dwarf Grill restaurant which opened in 1946 in Hapeville, Ga. It was the signature menu item when the first Chick-fil-A restaurant opened in 1967 inside an Atlanta mall. Though joined by many other menu options over the years, the Chick-fil-A sandwich remains the centerpiece of the menu as the chain has grown to nearly 1,920 restaurants in 42 states and Washington D.C.

For more information on the new Chick-fil-A restaurant, visit http://www.chick-fil-a.com/Westdale or find us on Facebook at http://www.facebook.com/CFAWestdale.