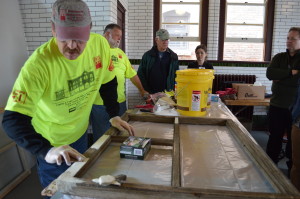 IOWA CITY – Homeowners with older windows can learn restoration techniques during a workshop this Saturday in Iowa City hosted by Friends of Historic Preservation.

The event is one of many scheduled in Iowa City during Earth Month. Another event that had been set for this Saturday at the East Side Recycling Center, the Repair Fair, has unfortunately been canceled, but the window workshop will proceed as planned.

Find a list of nearly 40 other Earth Month events in Iowa City and read on for more about Saturday’s workshop from Friends of Historic Preservation:

Iowa City Window and Door Company will provide a workshop for the homeowner on historic wood windows, storm sashes, and screens. The program, sponsored by Friends of Historic Preservation, will be held at the East Side Recycling Center Education Center, 2401 Scott Blvd SE at 10:00am Saturday, April 5, 2014. The workshop is free and open to the public.

“I’m Sure my Old House Just Needs a Hug” is a workshop to provide the homeowner with basic knowledge to restore wood windows in older homes, saving money and materials.  The workshop will cover the replacement of stiles and rails, glass putty, glazing, and functional components windows, such as pulleys, ropes, and weights.

“Most people don’t realize that the older windows in historic homes are better and more energy efficient than many replacement windows,” explained Mark McCallum, President of Friends of Historic Preservation. “If you think about it, windows in a historic home many have already served you well for a hundred years and you are not likely to get that kind of guarantee out of many newer manufactured windows.  However, it is natural after 100 years that windows may need a little TLC to get them back up to their original condition.  That can be done for a tiny fraction on the cost of replacing windows and this workshop will show you how to do that.”

The workshop will present the tips of the trade for the do-it-yourselfer and will also provide strategies and ideas for those who would like a little more assistance.

Friends of Historic Preservation has been active in Iowa City, Iowa since 1975 when Its founding members helped save “Old Brick” from demolition.  In 2007, Friends was recognized by the National Trust for Historic Preservation with a national Preservation Honor Award for the massive recovery effort after the April 3, 2006 Tornado.  In years prior, Friends invested in the community with both volunteer labor and funds to restore the Englert Theatre, purchased endangered homes in historic neighborhoods to restore and return to the community as single family residences, and many times stood with other citizens and groups to save endangered structures like the Carnegie Library and the Weatherby House.  In addition, Friends operates the Salvage Barn, an architectural salvage warehouse and tool lending library in cooperation with the City of Iowa City.