As experts debate how to feed the world’s growing population into the future, Andrew Freitag has taken action. 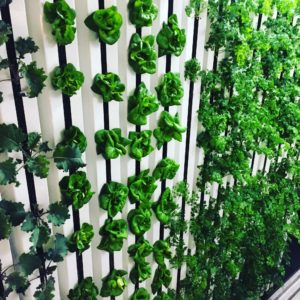 So far, he is succeeding.

In the first year alone, Friday’s Fresh Market’s lettuce, kale, microgreens, herbs and more have made it into a number of grocery stores, restaurants and other Eastern Iowa outlets and onto customers’ tables, at their peak of freshness.

“They go on the shelf at Hy-Vee or the (Quad Cities) Food Hub or restaurants within hours of being harvested,” Freitag said. “It’s literally the freshest produce in the grocery store that day.”

Freitag, 35, grew up farming in the Midwest, but worked as an engineer before starting his new venture last year. His current farm isn’t a typical one.

Rather, Friday’s Fresh Market takes on an other-worldly appearance, with high-efficiency LED lighting in deep red and blue hues to mimic sunlight and 7-foot-tall vertical growing towers, located in a 40-foot-long upcycled shipping container in Davenport, nearly the size of a semi-trailer.

The 4-inch-thick walls serve as insulation, allowing the freight container to sustain its own ecosystem inside, with a year-round, consistent growing environment.

Crunchy romaine, smooth butterhead and other varieties of lettuce, as well as arugula, kale, herbs such as basil, mint and cilantro, and microgreens, including flavorful mizuna and colorful bull’s blood beets, grow in rows of hanging vertical towers.

The towers are rotated as they grow through various stages of cultivation, with the rows allowing for just the right flow of air, water and lighting. All-natural blends of minerals and vitamins are used to feed the plants, with no chemicals sprayed on the crops.

In typical shipments coming from places such as California, 20 percent of the produce might already go bad by the time it reaches the Midwest, he said. “With ours, it eliminates waste. They’re not throwing any of it away.”

That’s because the greens from Friday’s Fresh Market are delivered the same day they are harvested, arriving in stores and other destinations within hours.

Much of it is sold in clamshell containers that customers can buy and have a ready-made fresh salad, straight off the shelf. Other portions go to chefs at the stores or restaurants, where they create salads by adding chicken, nuts or other products that Friday’s Fresh Market does not grow.

By selling the produce at wholesale prices, Freitag realizes that Friday’s Fresh Market is taking a smaller profit margin, but that’s where the company’s mission comes into play: to improve the quality of life by providing the Quad Cities area with healthy eating options. 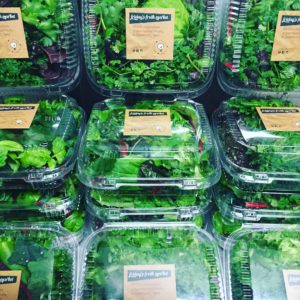 “From a business standpoint, it’s not as profitable,” he said. “But we feel there is a big need to support the grocery stores because of the lack of fresh food they have there.”

In fact, it was after becoming frustrated with the expensive, wilted produce that area grocery stores had to offer that Freitag was inspired to go into hydroponics.

“It almost seemed like living in the Midwest equaled not having real fresh produce on the dinner table,” he notes on the company’s website. “So, after a few family meetings, we decided to take business in our own hands ― and we created Friday’s Fresh Market.”

The name comes from his German family name, which means “Friday.”

Freitag and his father had a separate business with cargo containers before he realized their potential use in hydroponics. The system uses cutting-edge automated technology that can be monitored and adjusted remotely, though Freitag spends a large amount of time at the farm, in addition to marketing and other aspects of the business.

“The first year was a lot of trial of growing leafy green produce to see what grows well and what the market demands,” he said. “It’s done well in its first year.”

Oftentimes, the produce sells out before the next delivery. The greens are harvested at their “baby” stage, meaning the plants, even kale, are tender enough to eat as-is, and at their height of nutritional value.

That compares to most long-distance shipments of produce, which is harvested later to withstand travel in a less tender stage.

“With our stuff, it’s very tender and can be eaten raw,” Freitag said.

Chefs at places such as Barley & Rye Bistro in Moline; Hemispheres Bistro in Bettendorf; and the Crow Valley Golf Club in Davenport are especially appreciative of the local greens.

Fresh Blends in Bettendorf and Simple Superfood Cafe in Davenport also use Friday’s Fresh Market’s produce, along with sales through the Quad Cities Food Hub and Hy-Vee.

Freitag is looking at other options to expand his operations in Davenport by converting space considered unusable into a thriving farm. Each cargo container can produce 30,000 pounds of fresh produce annually, in just 320-square-feet.

“We make a lot of use out of a little space,” he said.

The site does not operate using solar power yet, but is ready as the technology becomes available.

Freitag sees the system as the wave of the future.

As a farmer and engineer, he has long pondered how to combat issues such as soil erosion.

“How do we face this huge challenge to have sustainable food with outdoor farming? The only way to do it is to move it inside,” he said, citing the hydroponic system capable of producing commercial-scale yields in any climate and any season. “This has proven to be a good solution.”