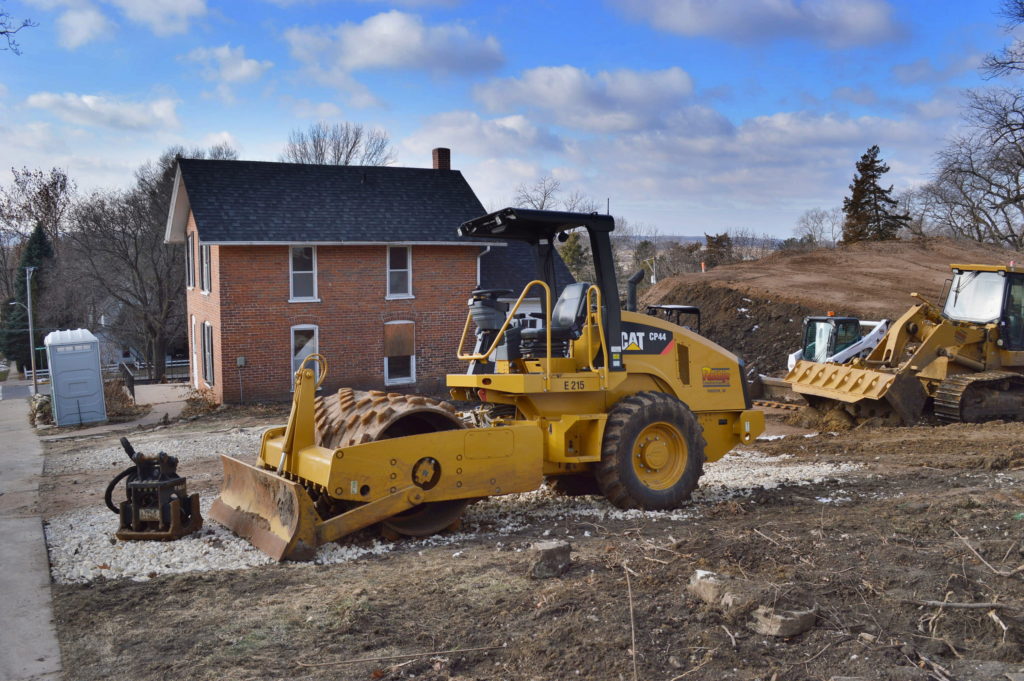 Equipment is in place Dec. 31, 2016, on the construction site of the new science building for Cornell College in Mount Vernon, Iowa. Two Civil War-era buildings, including this brick home, will be demolished. (photo/Cindy Hadish)

MOUNT VERNON – Two Civil War-era homes on the National Register of Historic Places will be demolished to make way for a new science building at Cornell College.

The Mount Vernon Historic Preservation Commission finally approved the project Dec. 28, after months of concern about the fate of the brick buildings and suggestions on how the college might save the homes.

Leah Rogers, chairwoman of the Historic Preservation Commission, said Cornell plans to  use the foundation stones as retaining walls for planter beds resembling the footprint of the two houses. The college also hopes to use some of the bricks for a donor wall on the interior, “although that is less certain,” she said. 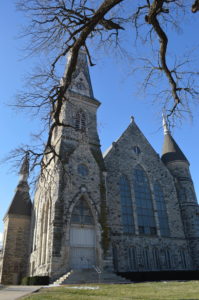 Built in 1882 of dolomitic limestone locally quarried, King Chapel is among the historic structures on the Cornell College campus in Mount Vernon, Iowa. (photo/Cindy Hadish)

Components from both houses have been salvaged, Rogers noted.

The two buildings are listed as contributing structures to the Cornell College/Mount Vernon Historic District on the National Register of Historic Places. Cornell is one of just two colleges nationwide to have the entire campus listed on the register, according to its website.

The nomination notes that both were good examples of mid-19th century masonry construction, made with local brick.

During the past year, commission members had suggested the college change the configuration of the new $35 million science building to allow the two homes to remain or have the buildings moved.

Cornell representatives said a building mover quoted a price of $200,000 to $250,000 to move the buildings to another site on campus, with more for work to bring the homes up to code. (This compares to $20,000 that Save CR Heritage spent to move a similarly-sized house several blocks recently in Cedar Rapids.) 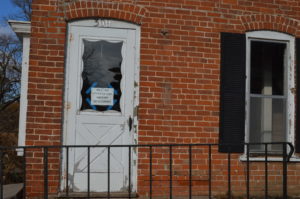 A sign notes that water and gas have been disconnected, as Cornell College prepares two structures for demolition. (photo/Cindy Hadish)

Redesigning the science center to leave the two buildings on-site would have required additional retaining walls and changing the entrance, which the architect, BWBR Architects, estimated at $600,000.

At the commission meeting in November, members noted that the group’s duty is to ensure that historically significant buildings are preserved in the community, and that efforts should be made to allow such buildings to remain, rather than be demolished for the sake of convenience for new construction.

Cornell faculty members who attended the meeting pointed out the importance of having the new science facility.

A listing on the National Register offers no protection from demolition.

Site work for the new science center had already begun as of early December, with construction planned to begin in February or March 2017.

Jill Hawk, public relations director for Cornell College, noted that crews will resume work on Monday, Jan. 9, on the site plan the city of Mount Vernon approved at the end of November.

“Cornell had a plan to move the houses, if there were any potential buyers,” Hawk wrote in an email. “Because that didn’t work out, the college is teaming up with a local company called Salvage Barn in Iowa City to recycle and reuse as much as possible from the two homes and incorporate the history and material into the architecture and design of the new science building.”

Hawk said the vendor’s estimate to move the homes was $50,000 to $80,000 per home, depending on the situation. The $200,000 to $250,000 was the estimated total cost of relocating both houses considering everything from trimming trees to new foundations, new utilities (plumbing, electric, heating), new sidewalks and moving power lines, she said.

Both homes were advertised on Zillow and in the Mount Vernon-Lisbon Sun newspaper beginning in August. The Sun ads ran for several weeks.

Hawk said the houses were for sale for $1, with the buyers paying for all of the moving costs.

“The time frame for people interested in moving the houses has passed,” she wrote, “so the college is now working to reuse and recycle as much as possible from the two homes.”

Hawk noted that Cornell is still actively raising money for the $35 million science building project, which will be fully funded through alumni, friends, and foundation support.

The construction timeline of the new building all depends on fundraising progress, she added.

Originally known as the Iowa Conference Seminary, Cornell College was founded in 1853 by George Bryant Bowman, a Methodist minister from North Carolina, with help from a group of prominent residents in Mount Vernon, Iowa.

The school was renamed in 1857 after William Wesley Cornell, a prosperous merchant and devout Methodist whose distant cousin, Ezra Cornell, founded Cornell University a decade later, the college’s website notes.

See photos of the two homes, as well as some of the other Cornell College buildings that are on the National Register of Historic Places: 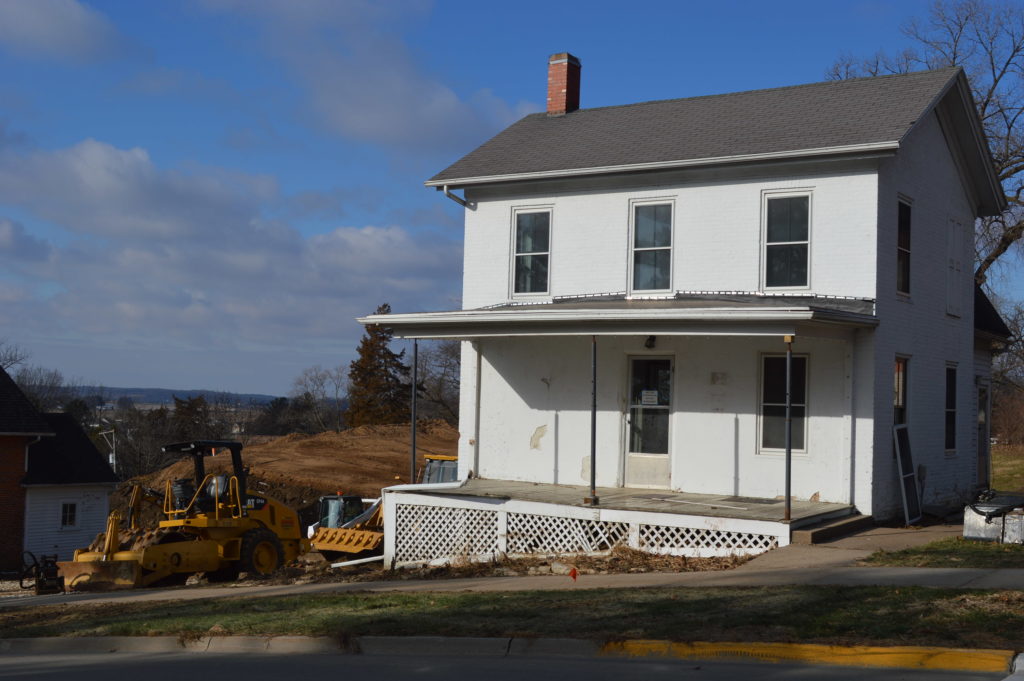 This brick building, painted white, was constructed in the 1860s. The home will be demolished to make way for a new science building for Cornell College in Mount Vernon, Iowa. (photo/Cindy Hadish) 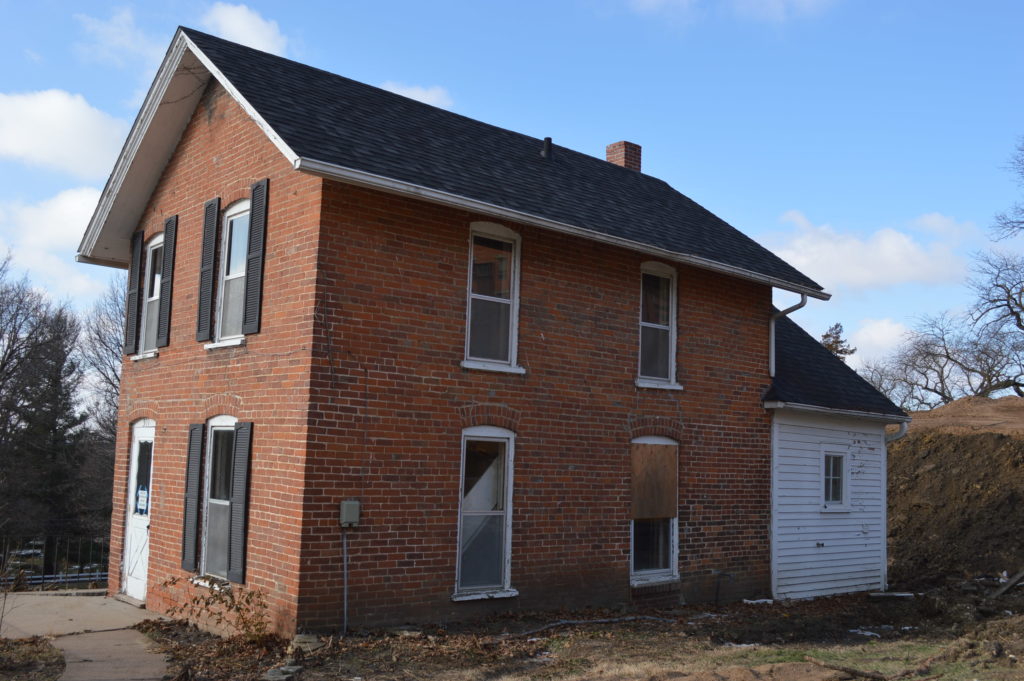 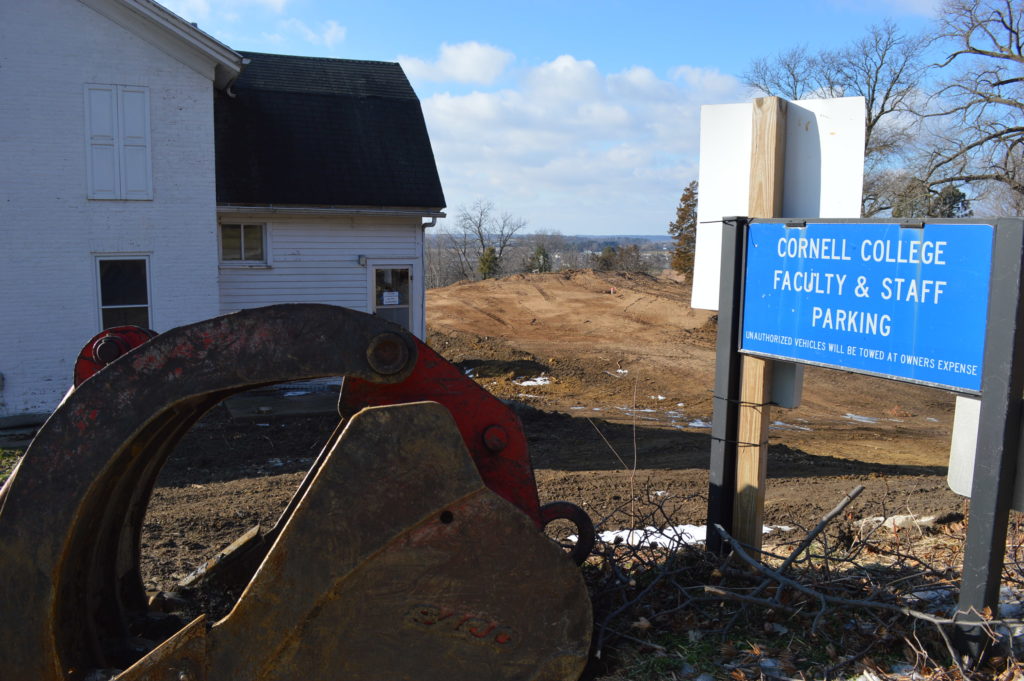 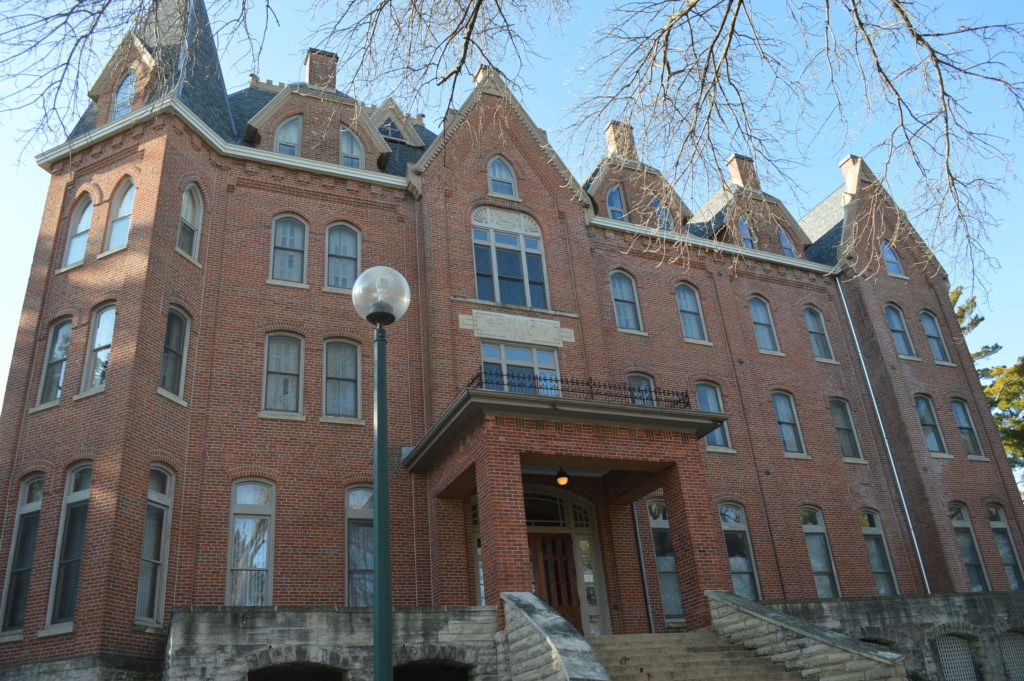 Built in 1885, Bowman Hall is the oldest residence hall on the Cornell College campus and was named in honor of Cornell’s founder, George Bowman. (photo/Cindy Hadish) 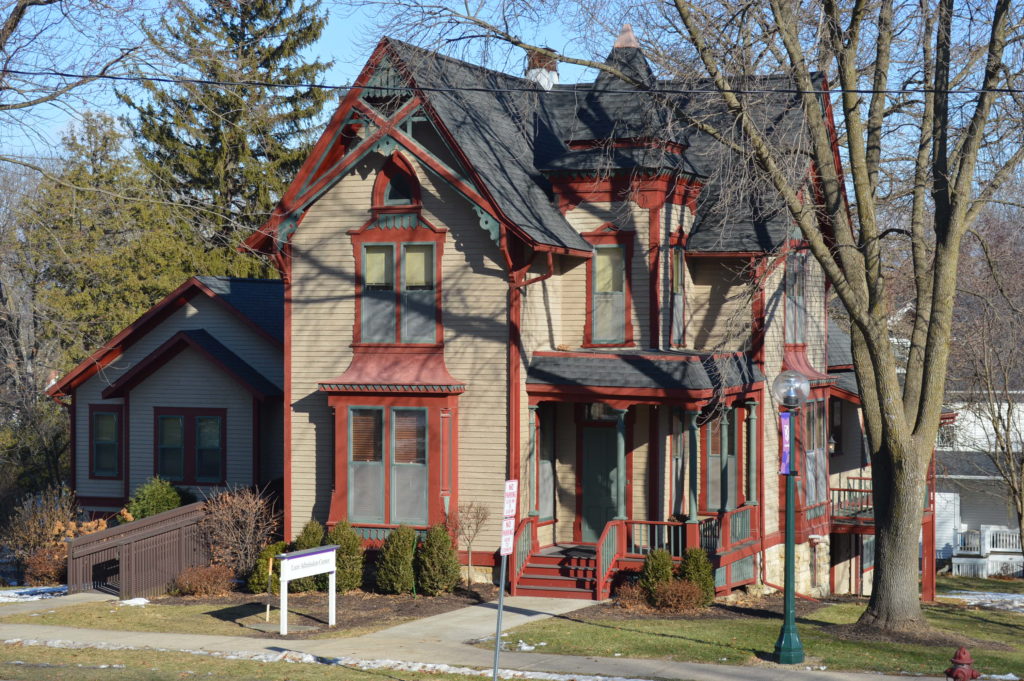 The Peter Paul Luce Admission Center was built in 1884. Known as the Wade House, the college acquired the home in 1947 upon the death of Ruby Clare Wade, a French professor from 1917 to 1947. (photo/Cindy Hadish) 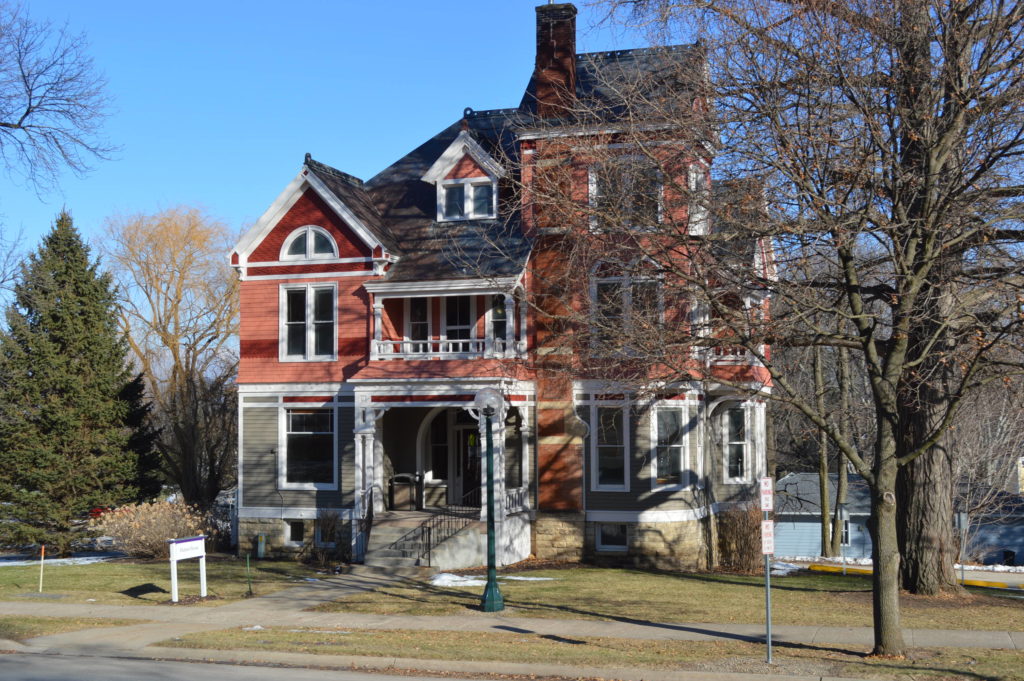 The Platner House was constructed in 1913 by hardware dealer William E. Platner for his wife, who wanted a house for her parties. Cornell College bought the mansion in 1963 to serve as rehearsal space for music students. (photo/Cindy Hadish) 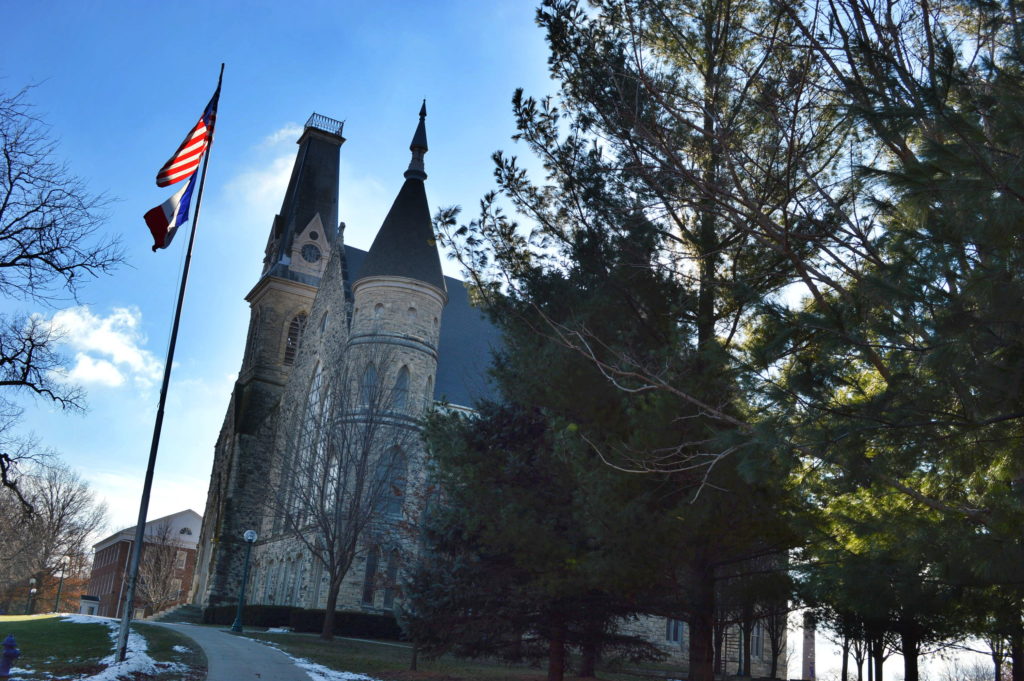 King Chapel is shown on the campus of Cornell College on Dec. 31, 2016. The entire campus is on the National Register of Historic Places. (photo/Cindy Hadish)