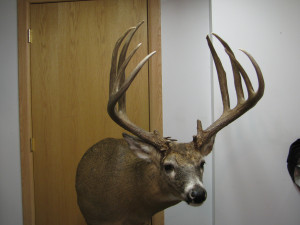 Photo courtesy of the Iowa Department of Natural Resources

A Moravia man was assessed $20,000 in damages after pleading guilty to poaching a trophy deer.

According to the Iowa Department of Natural Resources, Jerry Kaster, 40, of Moravia, shot a buck deer that scored more than 200 inches with a .270 rifle while driving his minivan on a rural road in the Lake Rathbun area.

DNR information officer, Mick Klemesrud, said the award was so high because it was a world-class deer, taken by illegal means.

Here is more from the DNR about the case:

CENTERVILLE, Iowa – Jerry Kaster, 40, of Moravia, pleaded guilty and was assessed the maximum amount of $20,000 in liquidated damages for unlawfully killing of a trophy whitetail deer in Appanoose County. The case began with a call to the Turn in Poachers hotline on December 2, 2010.

According to the investigation, Kaster had shot a buck deer that scored more than 200 inches, with a .270 rifle while driving in his minivan on a rural road in the Lake Rathbun area.

Conservation officers located Kaster, the deer, and Kaster’s rifle at a residence a few miles from where the deer was killed.  A .270 bullet recovered from the deer was later matched by the DCI to Kaster’s Ruger .270 rifle.

While under investigation for this case, Kaster was fined in 2012 for falsely obtaining landowner tags to hunt deer.

In the course of the investigation, conservation officers determined that a matching set of shed antlers off this deer had been sold by another person to a collector for $8,000.

The timely reporting to the Turn In Poachers hotline (1-800/532-2020) made apprehending this trophy deer poacher possible.

Callers are eligible for rewards: