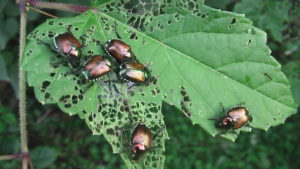 UPDATE (June 25, 2016) One day after posting this, I’ve seen the first Japanese beetles of the season. And of course, they’re after my raspberries!

June 24, 2016 – It seems to be an especially bountiful season for raspberries, perhaps because of plentiful and timely rains in Iowa.

But for the past decade or so, my high expectations for a bumper crop of berries is quickly tempered by the annual invasion of Japanese beetles.

So far, I haven’t seen the copper-colored beetles, which make a quick meal of not only raspberries, but more than 300 other plants. Favorites include roses, hollyhocks, linden trees and grapes. Besides seeing the beetles, an obvious sign of infestation is their telltale mark on leaves that end up looking like lace once the beetles begin feeding.

My hope is that their numbers are decreasing over time, as I’ve heard has happened elsewhere, after their initial population explosion in a given region. Because the foreign invaders have no known natural predators here, though, perhaps that is wishful thinking.

Rather than attacking the beetles with chemicals, which can also harm our butterflies, bees and other beneficial insects, the easiest removal method is knocking them into a bucket of soapy water. This isn’t particularly helpful with trees, but if the tree is healthy, it may not look especially nice, but should survive even the voracious appetite of Japanese beetles.

gardeninggrapes, how to get rid of, Japanese beetles, linden, raspberries, roses