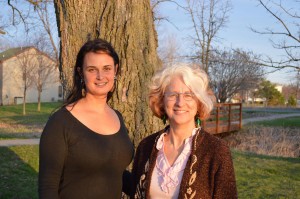 Julia “Butterfly” Hill, left, met with Shannon Ramsay, founding president and CEO of Marion-based Trees Forever, and other environmentalists during a dinner Sunday, April 21, 2013, at Prairiewoods in Hiawatha. (photo/Cindy Hadish)

HIAWATHA – For someone who spent two years living in a tree, Julia “Butterfly” Hill appears quite down-to-earth.

“If people want to call me a tree-hugger, that’s great,” said Hill, 39, who was given the nickname “Butterfly” as a child. “I’m a proud tree-hugger.”

Best known for the 738 days she lived on a platform in a California redwood to prevent loggers from cutting down the tree, Hill now lives in Belize, but is traveling throughout the United States through mid-May.

She stopped at Prairiewoods in Hiawatha today on a tour sponsored by the Sisters of Mercy. Hill will speak at 1 p.m. Monday, April 22, 2013, at the Mount Mercy University Chapel of Mercy. The event, which coincides with Earth Day, is open to the public.

“I never write a speech,” Hill said during a dinner at Prairiewoods Franciscan Spirituality Center. Instead, she plans to talk about matters close to her heart; especially as people see themselves connected to our planet.

The “disease of disconnect” happens when people don’t have that relationship, she said, and make choices that can destroy the Earth. 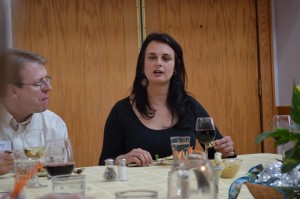 Hill, who majored in business and arts, cited purchase power as one way to make a difference, but called boycotts a reactive second or third step.

“The first piece of the puzzle is proactive,” she said. “The first solution is to invest as much locally as possible. If there’s not an answer that’s local, I look to see if there’s a way to create one.”

Hill noted that the most difficult part of living in the tree she affectionately called “Luna,” was bearing witness to the forest being destroyed. Her action in the late 1990s led to an agreement that protected Luna and trees in a surrounding buffer zone.

She has since returned to visit the tree – estimated to be 1,500 years old – which remains alive in spite of an effort by vandals to cut it down.

“There’s a symbolic tree for every one of us,” Hill said, calling on people to do what it takes to make a difference. “Growth only happens on the edge. It doesn’t happen in our comfort zones.”