Last Downtown Farmers Market of the season in Cedar Rapids; many other awesome markets continue 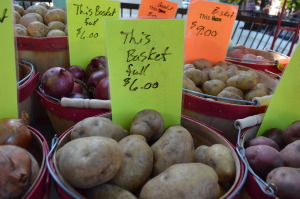 Potatoes and other vegetables are sold by the basket by Brad Alderton at the Washington, Iowa, farmers market on Sept. 18, 2014. (photo/Cindy Hadish)

WASHINGTON, Iowa – This Saturday, Sept. 20, is your last chance of 2014 to see everything the Downtown Farmers Market offers in Cedar Rapids, but don’t dismiss the many other farmers markets that are held in Eastern Iowa, some of which continue through October.

Many years ago, my friend Marlene Lucas, in her job as ag reporter, told in glowing terms about the farmers market in Washington, Iowa. It took me a good decade or more to go, but the wait was definitely worth it.

The first impression I had of the market this Thursday was the savory scents of grilled food wafting through the air the moment I stepped out of the car. The market is held in the town’s center, with a European courtyard-style feel, surrounded by well-kept older buildings, mature trees that provide welcome shade and a fountain in the center.

Some of the vendors offered samples of their goods, such as B’s Bounty from Crawfordsville, which provided tastes of specialty jams and jellies, including a unique chocolate blend.  Delectable. And watch for the women of Tiny Town. If you see them at a market – maybe someday with a restaurant  – you won’t want to leave without buying some of Rosa Altagracia’s rangoons. The East Coast chef decided to give Iowa a try, which it appears, is Iowa’s good fortune. 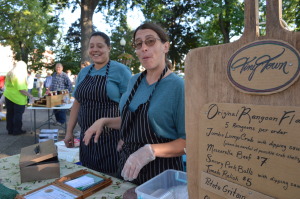 Tiny Town sells rangoons and other food with big flavor Sept. 18, 2014, at the farmers market in Washington, Iowa. (photo/Cindy Hadish)

The market also offers a great mix of produce – watermelons, squash, and a variety of other vegetables abounded on this mid-September day – along with wonderful baked goods from bakers in Kalona and elsewhere. The ethnic variety was incredible, as well. Martha’s Pastry sold a decadent Mexican bread pudding, one of several items I couldn’t resist. Directing it all is Bob Shepherd, credited by many of the vendors for his efforts into making a spectacular market.

So yes, my friend Marlene was right, and I know there are many other great farmers markets out there, even if you don’t make it to this Saturday’s market in downtown Cedar Rapids. Read on for more about the downtown market and if you get a chance, make your way to one of the farmers markets this season in Washington, Iowa, (see photos, below) or others on the Homegrown list.

The final  Downtown Farmers’ Market will be held this Saturday morning, Sept. 20, 2014. Saturday’s Presenting Day Sponsor is Quaker Foods and Snacks, a division of Pepsico Inc. Stop by their booth at the southeast corner of Third Street and Second Avenue (vendor stalls No. 126 and 127). They will have information about company initiatives, and will be selling bags of Quaker products for a $5 donation. The donations will support Paws and Effect, which raises and trains therapy dogs for disabled veterans and children.

This market features entertainment by Matt Rissi at 8 a.m. followed by Theatre Cedar Rapids at 10:30 a.m. and CR Suzuki Academy at 11:30 a.m.  The cooking demonstration begins at 10 a.m. on the corner of Third Avenue SE and Fifth Street SE; and the Kids Zone is on Third Street between First and Second Avenues, where you’ll find face painting and balloon animals. For more information, visit www.crdowntownmarket.com. 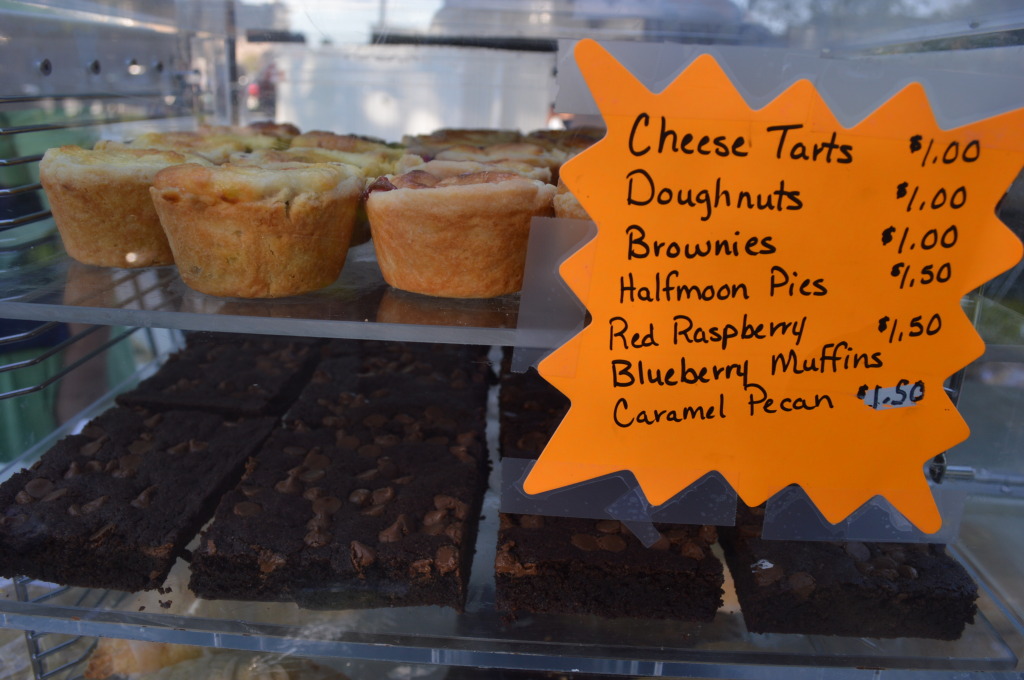 A wide variety of baked goods, including these by Golden Delight Bakery of Kalona, are sold at the Washington, Iowa, farmers market Sept. 18, 2014. (photo/Cindy Hadish) 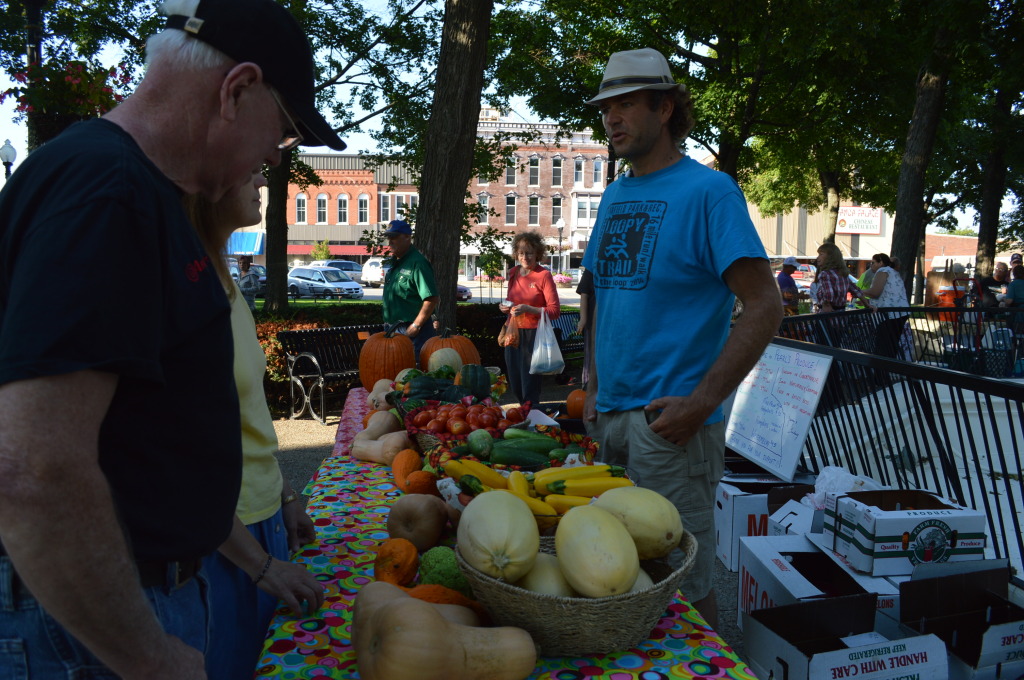 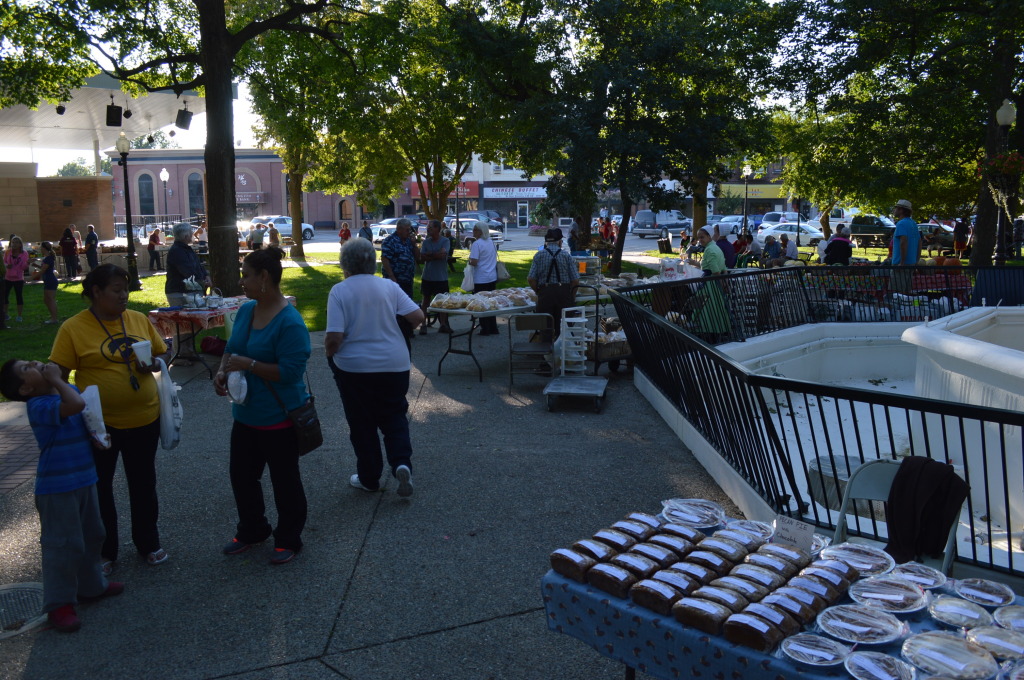 The Washington Farmers Market is held in the city’s Downtown Central Park, at Washington Street and Iowa Avenue, on Thursdays from 5-7:30 p.m. (photo/Cindy Hadish) 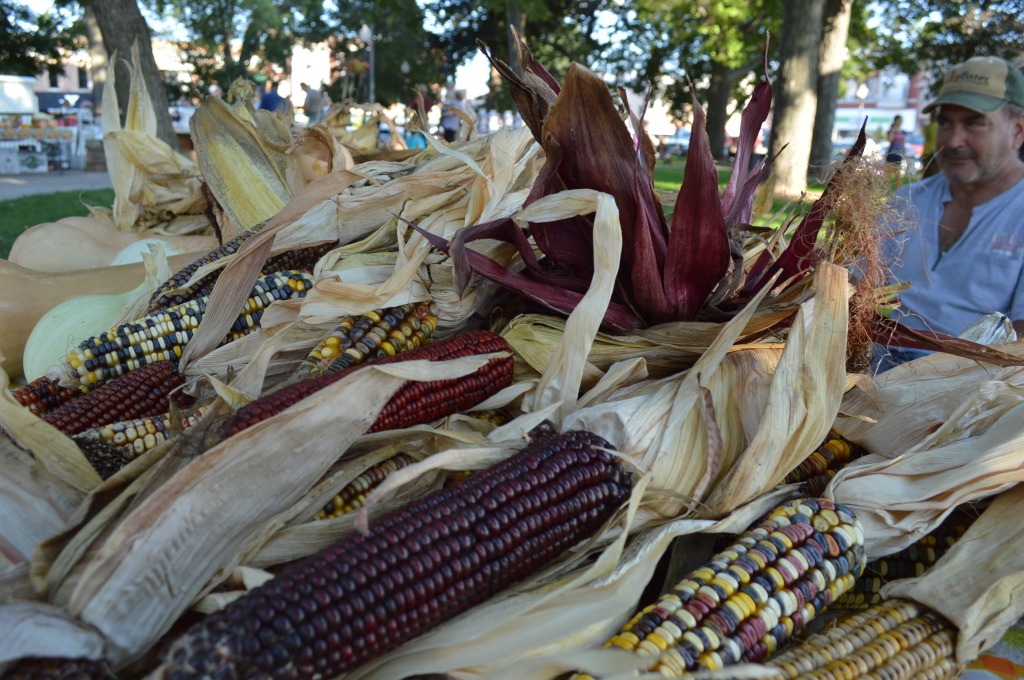 “Your squirrels gotta eat,” Joel Anderson says of the ornamental corn he was selling Thursday, Sept. 18, at the Washington Farmers Market. (photo/Cindy Hadish) 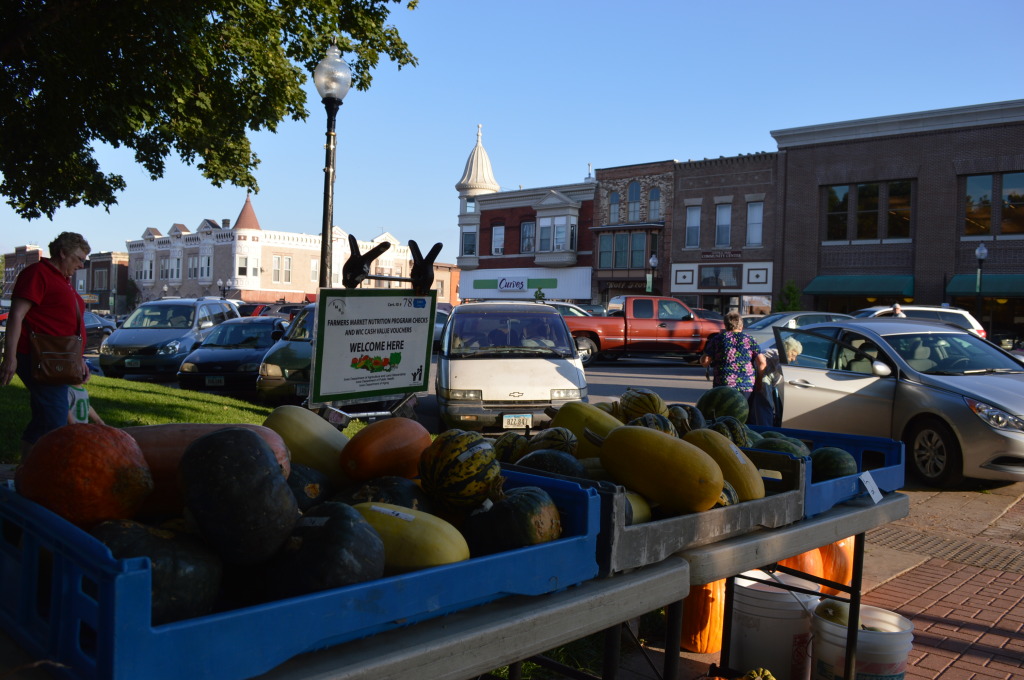 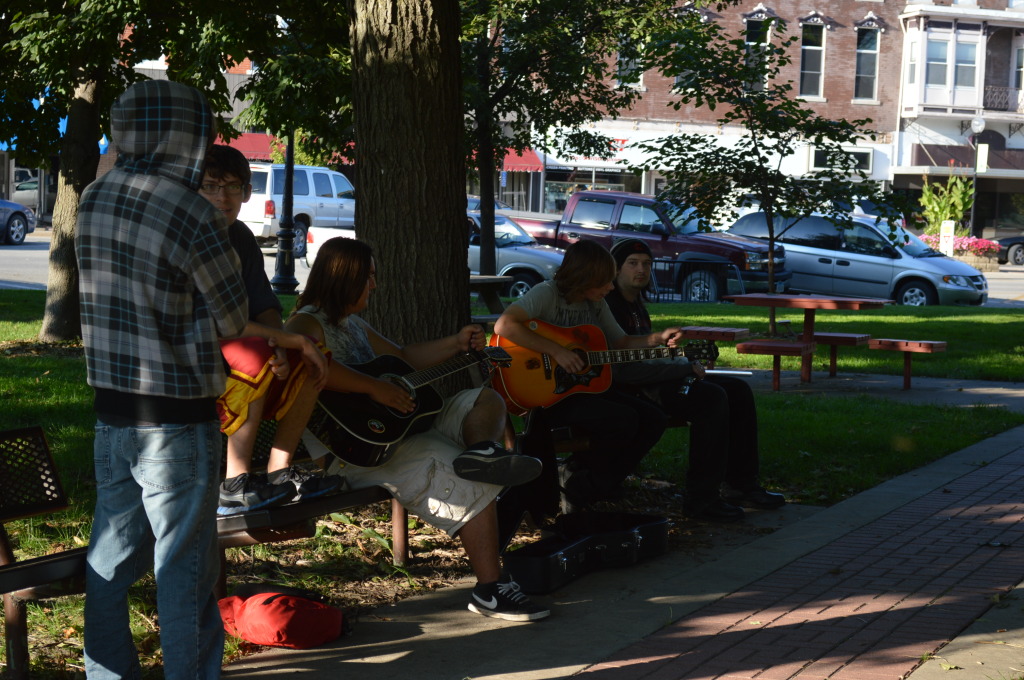 Guitarists play for their friends alongside the Washington Farmers Market on Sept. 18, 2014. (photo/Cindy Hadish) 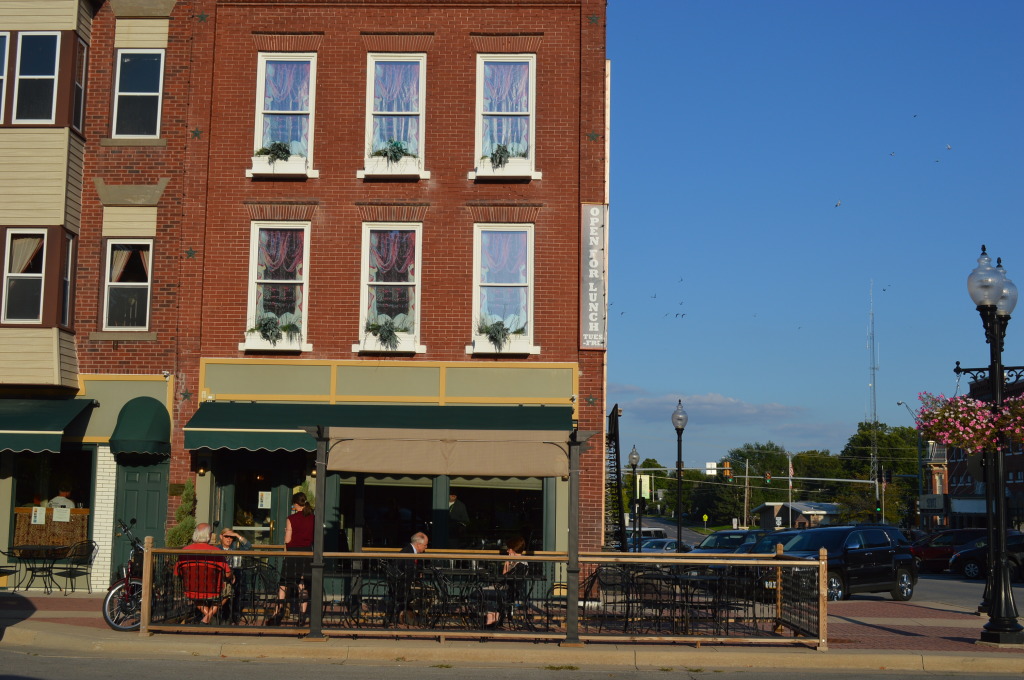