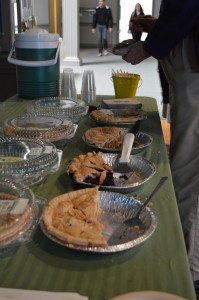 Members of New Pioneer Co-op were encouraged to vote for “more pi” at a meeting Sunday at the Cedar Rapids Museum of Art. (photo/Cindy Hadish)

CEDAR RAPIDS – New Pioneer Food Co-op members in the Cedar Rapids area need to vote if they’d like to bring a store to the city.

At a meeting Sunday at the Cedar Rapids Museum of Art, about 50 members were told that some of the membership might prefer not to expand outside of Coralville and Iowa City, the co-op’s home base.

Voting is under way to authorize the New Pi Board  to add a third store, or, in the event that a viable downtown Iowa City site can be found, to relocate the Iowa City store within the immediate downtown area.

“It makes sense to cast that broad net and see where we go next,” Board President Sarah Walz said, emphasizing that finding a suitable downtown Iowa City location appears remote.

Board members had hoped to relocate the downtown store out of its current site in a flood plain, but adding a third store – and potentially a fourth and fifth – makes sense, Walz said.

Both the Iowa City and Coralville stores are operating at or near capacity with sales above the national average, she said, but neither store can expand in its current location.

New Pioneer Cooperative Society was founded as a natural foods cooperative grocer in Iowa City in 1971, and opened its Coralville branch in 2001. A short-lived Cedar Rapids location operated several decades ago.

Some members at Sunday’s meeting questioned whether Cedar Rapids had changed sufficiently since that time to make a location here a viable option. One woman, who lives in the Cedar Rapids area, said Cedar Rapids residents are “unsophisticated” and are either old or have never been out of this area.

Others countered that the local foods climate has changed considerably. Linn County Supervisor Lu Barron pointed out that Saturday’s Downtown Farmers Market attracted an estimated 18,000 customers; Matthew 25 operates an urban farm here  and the city is a Blue Zones demonstration site, with a focus on healthy eating. 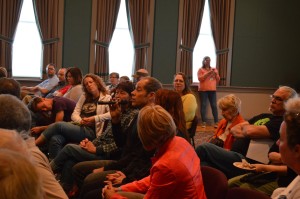 About 50 members of New Pioneer Food Co-op were able to comment and ask questions at a meeting Sunday, June 2, 2013, in Cedar Rapids, Iowa. (photo/Cindy Hadish)

Dr. Sharon Collins said she has seen allergies increase at an alarming rate of 55 percent since she began practicing in Cedar Rapids, but has seen a shift in her patients’ awareness of healthy eating.

“The majority are starting to wake up,” Collins said. “More people are interested in where their food comes from than I’ve ever seen before.”

Ruth Fox said the New Bohemia district of Cedar Rapids, home to the NewBo City Market, will have a growing number of residents who could walk to a new New Pi store.

Walz noted that no sites have been identified for a new store; the membership first must approve the board’s authorization to expand before a location is selected.

About 85 members attended a meeting Saturday in Marion, another potential site for a store.

Questions about competition with Hy-Vee also were posed, but Walz said preliminary market studies show an opportunity for growth in Linn County.

“I don’t know why your beets taste so much better than Hy-Vee beets, but they’re worth the drive,” said Corenne Liabo of Cedar Rapids, who has been a New Pi member for nearly 20 years.

Walz noted that New Pi works closely with local farmers in relationships that are unique to the co-op.

Sally Smith of Cedar Rapids said she buys much of her meat and fish from New Pi.

“I want to know where my chicken comes from,” she said, “and who’s been handling it.” 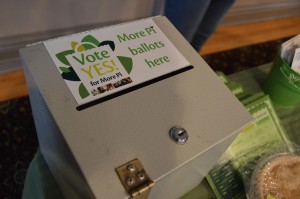 Voting continues at either New Pi store until June 14. Ballots are due by mail on June 13. Results will be announced June 17. Find more information at www.newpi.coop.