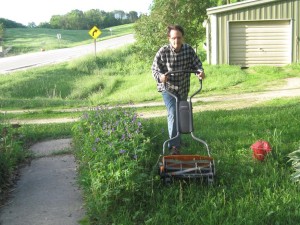 The author mows the lawn of his home in Stone City with a modern reel lawn mower. The Fiskars StaySharp Max model is lightweight and has a wider height adjustment than most, but only cuts an 18-inch swath. (photo by Calvin DeWitte)

My knees and shoulders are sore in ways I haven’t felt for years.

I’m surprisingly comfortable with this discomfort. That’s because the soreness comes from using my body more and petrofuels less in mowing my lawn.

When my old power mower gave up the ghost this spring, I decided there must be a better way to mow.

I recalled reading an article a while back about a study conducted at Stockholm University that revealed mowing grass for an hour produces about as much air pollution as driving a car for 93 miles, primarily because mowers are not equipped with catalytic converters.

My home’s lot covers just under one-fourth of an acre. Since I already drive too much, I thought that reducing my lawn mower pollution would be one way I could improve my carbon footprint and emissions in the summer months.

Reel mowers have been around since at least the 1830s, when they were pulled by horses, and became popular with American homeowners in the middle of the last century, when lawns tended to be smaller than they are today. The push-reel type lawn mower works by using a set of helical shaped blades arrayed in a drum configuration turning parallel to the ground. The blades are turned over by energy transfer via an internal gear mechanism from the mower’s two drive wheels, between which they are mounted. They slice the grass off against a straight blade at the back or front of the mower.

I ran across a modern version of the reel lawn mower at Lowe’s, where I worked in sales last spring. When I saw the simple little reel mower on the shelf, I wistfully remembered the rusty old reel lawn mower I found tucked away in a corner of my great aunt Millie’s shed when I was six or so-years old.

The heavy old reel mower with its rough unpainted wooden handle made a satisfying “whirrrrr” instead of the angry roar of a engine-powered mower.

I could really make the grass clippings fly if I could keep it going fast enough. Whenever I came to visit, Aunt Millie could count on a free mowing because I loved to use that old reel instead of her power mower.

Reel mowers aren’t for everybody. Pushing a reel lawn mower requires enough power to move the lawnmower and propel the spinning blades – much more “oomph” than required to move a normal push mower. They tend to bog down in dense vegetation or when going up an incline.

It’s hard to mow with a reel in places where you can’t keep up the rotational speed, such as mowing in between landscape plants. Even a moderate size stick that gets jammed in the reel mechanism can temporarily stop the mower in its tracks.

I started researching reel mowers online. They were surprisingly inexpensive. A simple model could be found many places for about $100, but models vary in the number of blades, quality, drive mechanism and features.

As I read up on reel mowers, I found more advantages. Some lawn-care purists prefer the look of reel-cut grass, because the reel blades neatly shear off the grass instead of chopping it unevenly like a power mower. Reel mowers don’t wake up the neighbors or send dust and clippings flying like a power mower, aggravating allergies. And of course, they don’t require gas, oil, or replacement spark plugs. 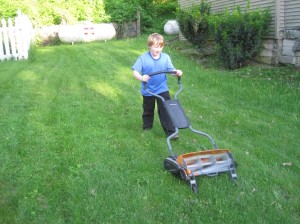 Calvin DeWitte, the author’s 11-year-old son, has begun volunteering for lawn mowing duty since the lightweight reel lawn mower arrived. It’s a struggle to get through tall grass, but fun on shorter turf. (photo by Dave DeWitte)

I decided to spend more than the minimum to find a more advanced reel model that overcomes some of the drawbacks of conventional reels. There were plenty of options from which to choose, attesting to the revival in the popularity of reel mowers.

I picked out a StaySharp Max model from Fiskars, the Finnish maker of scissors and shears, that cost a little over $200. I ordered it online from Lowe’s (don’t work there anymore, so no employee discount – but the shipping was free.)

The StaySharp cuts an 18-inch swath, is self-sharpening, and has a peculiar little projection on the front with two tiny wheels that allows for a wider height adjustment range. It was also lighter than many reel mowers, and is advertised as having design features that provides more inertial power to go through tough patches.

The mower arrived my doorstep a week later, requiring about 10 minutes to assemble and adjust. It had a contemporary look with its Fiskars-yellow plastic clipping shield and was surprisingly light with its plastic components.

The first mowing with the reel left my knees aching the next day. I had let the grass get too high, and even though I set the mowing height to 4 inches, the highest adjustment, it was a grind to push it through the dense spots. I would literally put all my weight into the handle to keep the reel momentum going.

To my surprise, however, I got through the mowing with only one rest break even though I’m a little out of shape and found myself gasping for breath a few times.

Mowing with human power took about 20 minutes longer than the typical 35-minute mowing time with my old push power mower.

The second time I mowed, the grass height was also an issue. While the Fiskars StaySharp Max allowed me to raise the height adjustment to compensate for the grass length, the bar on the height adjustment mechanism at the front of the mower pushes over dandelion stalks and grasses that have formed seed heads before the reel can shear them, so it leaves the tallest stalks and stems behind. The only way to cut these with the mower is by pushing back and forth over them in short movements, an awkward process.

At the third mowing, I realized that reel mowing goes smoothly if you give your lawn well-timed cuttings and pay attention to clearing debris. I took a line trimmer to the old stalks and stems that were missed in previous cuttings, and the mowing left a good even cut.

The physical aspect of reel mowing cuts both ways. If you like a workout, it’s good. If you don’t, you should plan on mowing your lawn a little at a time – maybe doing one side of your lawn each day. Working up a sweat is unavoidable, so it’s an even better idea than usual to steer clear of the mid-day heat.

One great thing about the reel mower is that you never have to worry about having trouble starting it, or running out of gas. You can leave the hearing protection and eye protection on the work bench.

The owners manual of the Fiskars StaySharp Max recommends testing the blade adjustment and sharpness by inserting an ordinary sheet of paper between the rotating blades and sheer blade, then carefully turning the wheels. The blade must be adjusted on both sides of the mower, requiring that four bolts be loosened and two screws adjusted. The drive chain should be lubricated occasionally and the blades kept dry to avoid rust.

With perserverance, I hope to make reel mowing part of my summer lifestyle and fitness routine. The soreness is going away, and my 11-year-old son has started volunteering to mow.

My great aunt Millie would be proud.

Editor’s Note: Dave DeWitte is a freelance writer and a communications specialist for a major aerospace/electronics firm. Comments to: 1davedewitte@gmail.com