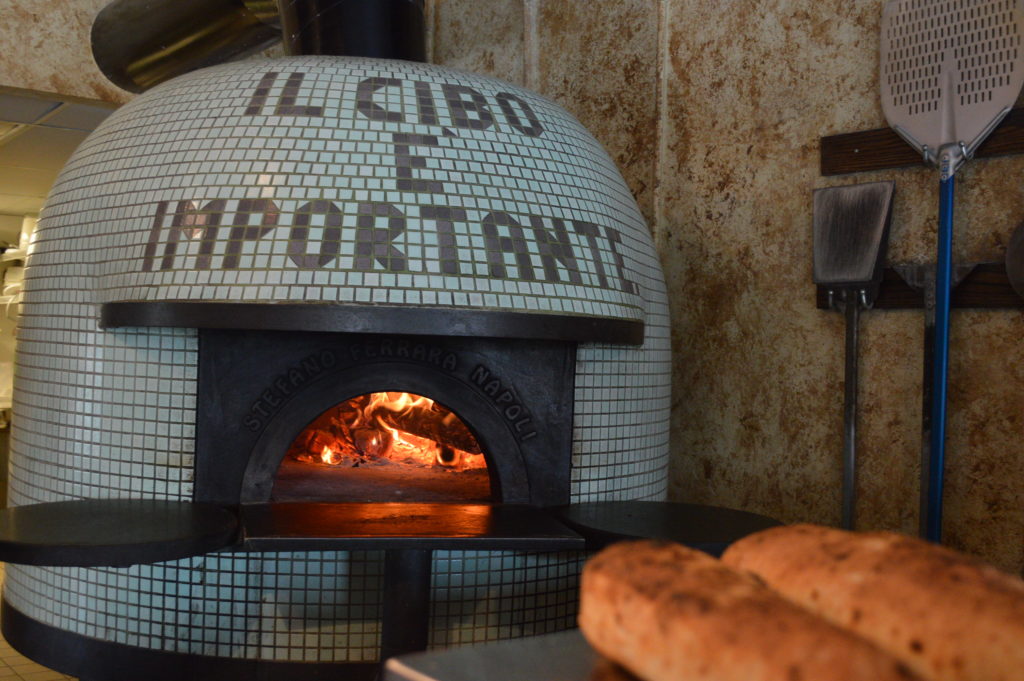 Mount Vernon’s popular Lincoln Winebar is acclaimed for more than its wine.

Pizza has been one of the prime attractions since 2012, when its wood-fired Stefano Ferrara brick oven was imported from Italy. Emblazoned in tile with the winebar’s motto in Italian “Il Cibo È Importante,” the phrase on the oven stays true to the roots of the Lincoln Winebar. That concept, originated with the winebar’s founders, also reflects owner Jesse Sauerbrei’s belief – evidenced by the tattoo on his wrist – that “food is important.”

“We try to go all-out on the quality of ingredients,” Sauerbrei said. “From the garlic, flour and mushrooms, all the way through to the San Marzano tomatoes and mozzarella, the quality of each ingredient is key.” 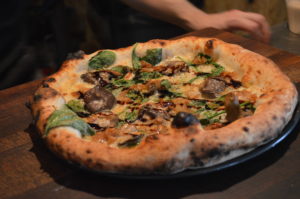 A pizza with oyster mushrooms and spinach is ready for a customer at the Lincoln Winebar in Mount Vernon, Iowa. (photo/Cindy Hadish)

Customers fortunate enough to make it to the Lincoln Winebar on special days in the spring might find a morel pizza on the chalkboard menu, with the par-cooked sponge-like mushrooms taking center stage on the pizza, complemented by a garlic cream sauce.

“It’s delicious,” Sauerbrei said of the morel pizza, which garners an abundance of Facebook posts and emails, while representing his underlying conviction that “simple” is best. “To me, food should be simple and fresh and that’s what makes it delicious,” he said.

“It’s kind of like the mother of pizzas,” Sauerbrei said. “It’s where pizza comes from.”

A margherita pizza, featuring fresh basil, and the house pork sausage pizza are among the top sellers, taking just 90 seconds or so to bake in the 900-degree oven. Pizza specials are available on Mondays and the five-year anniversary of the oven will be celebrated this year with “some sort of crazy special,” Sauerbrei said.

Sauerbrei brought extensive knowledge of fine wines and craft beer to the business as a wholesale representative when he assumed ownership of the Lincoln Winebar about three years ago. That experience translates to a high quality wine list, with 25 or so reds and the same number of white wines from around the world, along with up to 30 craft beers; all in cans or bottles, as nothing is on tap. 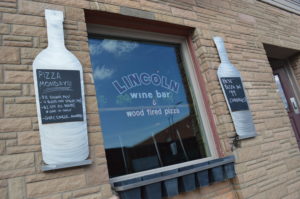 Cedar Rapids fans will be thrilled to learn that Sauerbrei has been exploring options to open a similar business in the city, though a site has not yet been identified.

“The location and space really need to speak to us,” he said. “If nothing jumps out, we’re just not going to do it.” Sauerbrei recently brought Megan Bartos on board as general manager for the Lincoln Winebar, with Nick Bradburn serving as kitchen manager/chef.

Customers can enjoy their favorite wine or beer as they listen to local musicians who perform on the Lincoln Winebar’s small stage from Thursday through Saturday nights.

With seating for just 50 at 125 First St. W., in Mount Vernon’s historic business district, the Lincoln Winebar tends to quickly fill to capacity on those nights. Customers regularly travel from Cedar Rapids, Marion and Iowa City, in addition to local regulars from Mount Vernon and neighboring Lisbon.

The live music is another way the Lincoln Winebar supports local businesses, along with several local farmers who supply vegetables and other food. 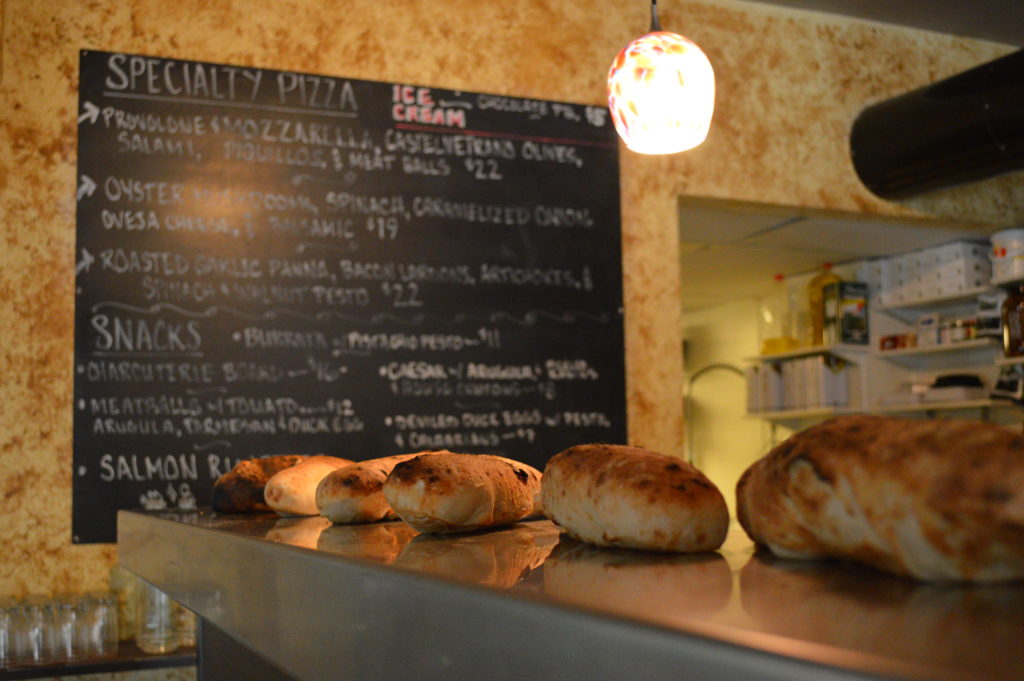 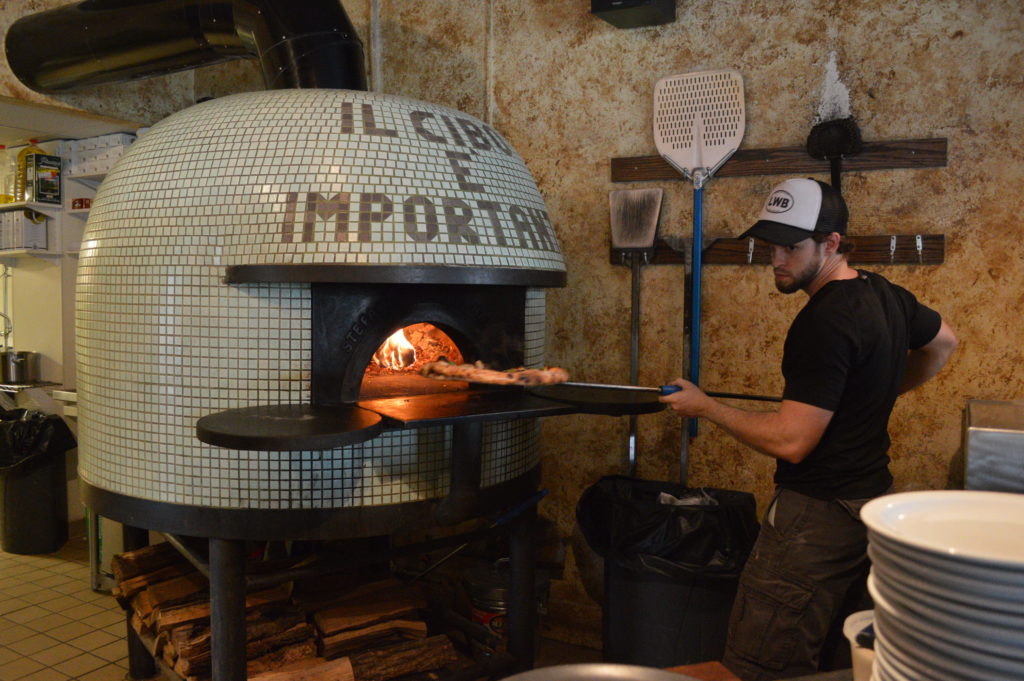 Nick Bradburn, kitchen manager/chef at the Lincoln Winebar, removes a pizza from the oven at the Mount Vernon, Iowa, business. (photo/Cindy Hadish)