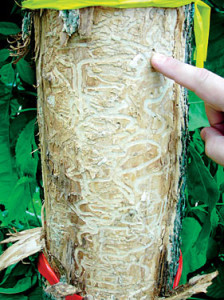 News today that Emerald Ash Borer was discovered in Muscatine brings to 11 the number of counties in Iowa where the destructive beetle has been found.

Find information about previous sightings and what you can do for your trees in these stories: Tenth infestation announced

Read more about the latest discovery from the state Emerald Ash Borer team:

DES MOINES – A larva collected by the Iowa EAB Team from a residential tree in Muscatine has been positively identified as the Emerald Ash Borer (EAB) by a federal identifier.  A statewide quarantine restricting the movement of hardwood firewood, ash logs, wood chips and ash tree nursery stock out of Iowa into non-quarantined areas of other states was issued on Feb. 4, 2014 and remains in place.

“The Iowa EAB team continues to respond to reports of suspected infestations as we work to monitor its movement and hopefully slow the spread.  Iowans are again reminded to not move firewood as that is the quickest way to start a new infestation,” said State Entomologist Robin Pruisner of the Iowa Department of Agriculture and Land Stewardship.

Please contact Iowa EAB Team members to have suspicious looking trees checked in counties not currently known to be infested. The State of Iowa will continue to track the movement of EAB on a county-by-county basis. Before a county can be officially recognized as infested, proof of a reproducing population is needed and an EAB must be collected and verified by USDA entomologists.