Natural nut butters spread from base in Cedar Rapids 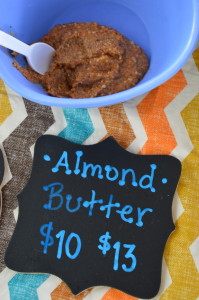 Butter Me Up! has spread since its beginnings in Cedar Rapids, Iowa. (photo/Cindy Hadish)

The six-month shelf life of Tracey Norman’s nut butters likely hold little consequence to most of her customers.

“People say it doesn’t last long, once they find their favorite flavor,” she said, adding that many eat it by the spoonful, straight out of the jar.

Those flavors, now in 15 varieties including some available only seasonally, are part of the key to the rapid success of Norman’s Butter Me Up! business, based in Cedar Rapids.

“I’ve always had an interest in healthy eating,” said Norman, who worked as a nurse before starting her own company. She taught nutrition education in that role and later gained marketing experience in direct sales. 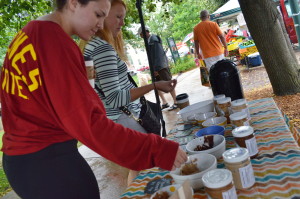 Customers sample a variety of nut butters this summer during the Uptown Marion Market. (photo/Cindy Hadish)

Norman decided to make her own nut butters as a healthy source of protein after she found a void in such products made locally. She bought her own grinder and the nut butters debuted in two flavors, honey roasted peanut butter and almond butter, in 2013 at the Downtown Farmers Market in Cedar Rapids.

Less than a year later, Butter Me Up! opened a merchant’s spot in the NewBo City Market in Cedar Rapids, where customers were able to observe the nut-grinding process.

“It was nice to have an arena like that to be able to cultivate your small business and get your name out there to the public,” Norman said. “It was a good opportunity to grow our customer base.”

She was approached by Hy-Vee to carry the nut butters in some of the grocery stores during periods when the products are not being sold at farmers markets, which now include markets in Marion, Des Moines and Iowa City, in addition to the downtown Cedar Rapids market.

Butter Me Up! also has a year-round spot at the Freight House Farmer’s Market in Davenport and just added on this summer at Newbo Shops at 208 in Cedar Rapids. 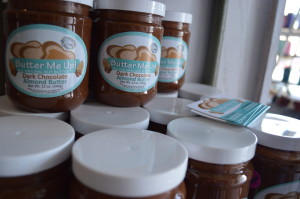 Butter Me Up! nut butters are shown at Newbo Shops at 208 in Cedar Rapids, Iowa. (photo/Cindy Hadish)

“It’s been a lot of work, but it was a lot of growth quickly,” Norman said. “It expanded faster that I expected it to.”

She relocated last year with her family to the Charleston area and no longer has a spot at the NewBo City Market, but is finding new outlets in South Carolina, where farmers markets thrive.

Farmers markets are particularly suitable for the business, as customers can sample the products and purchase their favorite flavor on-the-spot.

Those who are visiting from elsewhere can find the nut butters offered online, which Norman described as a growing portion of sales.

Her sister, Gale Huston, is managing the Iowa business, along with Rochelle Sparks, and Norman intends to continue doing business in Iowa.

Customers include parents with children, but also people with special dietary needs, those on diets and “anyone looking for healthier options,” Norman said. “It’s a good opportunity to eat something sweet while still eating healthy.”

Honey roasted peanut butter continues to be the company’s best-seller, she noted, adding that her personal favorite is the white chocolate almond butter.

Not a big bread eater, Norman instead spreads it on bananas and bagels. Many of the nut butters are used as dips for apples, celery and carrots, while some people bake with them.

One challenge has been the rising cost of nuts, related to drought conditions in California. The cost of almonds has risen 45 percent in the past two years alone, Norman said.

Still, the nuts provide a healthy protein and customers understand why they are paying more for the nut butters than they would for mass-produced peanut butter, which have added oils and other ingredients that her products do not, she said.

While her products are preservative-free, they require no refrigeration and can be stored on a shelf, like typical peanut butter. Even that 6-month shelf life doesn’t mean the nut butters will go bad, but may become dry after that time period, she noted.

Customers like Hannah Hagan, who stopped by the Uptown Marion Market looking for her favorite flavor, are among the company’s growing number of fans.

“I like the crunchy taste of it,” said Hagan, who added that she usually eats the nut butters with a spoon. “After I tried it, I’ve never had regular peanut butter since.”

Find more information about Butter Me Up! nutsaboutnutbutter.com 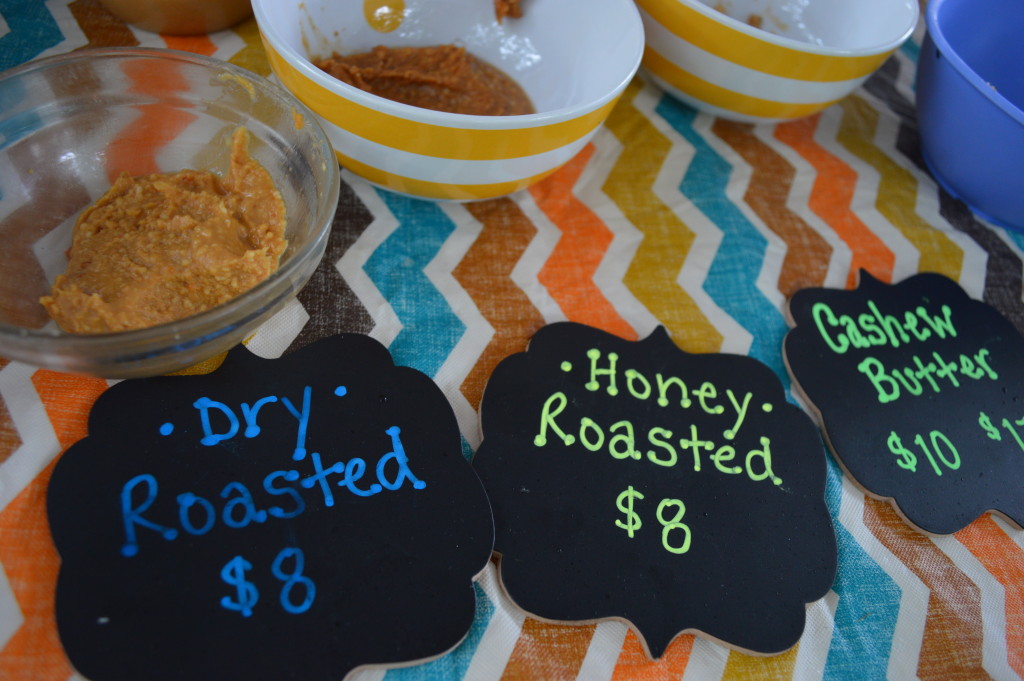 Samples of nut butters are offered for tasting at the Uptown Marion Farmers Market. (photo/Cindy Hadish)