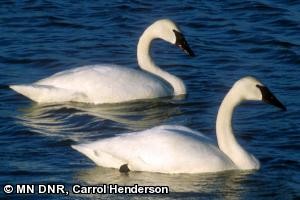 The Iowa Department of Natural Resources reported today that two hunters were charged in connection with the killing of one trumpeter swan and injuring another.

According to the DNR, the incident took place shortly after 9:30 a.m. Saturday, Oct. 3, 2015. The two were charged by the DNR on Sunday morning following an investigation.

Read on for more from the DNR’s report, as well as the status of Iowa’s trumpeter swan restoration project:

Two men have been charged after allegedly shooting two trumpeter swans at the Princeton Wildlife Area in Scott County.

Levi Young, 25, of Davenport, and Kyle Munson, 25, of Eldridge, allegedly shot the two swans while waterfowl hunting, killing one and injuring the other.

Attempts to capture the injured swan, which was shot through a wing, have so far been unsuccessful, but wildlife biologists for the Iowa Department of Natural Resources will continue the effort to locate the bird to determine if it can rehabilitated.

Both Young and Munson were each charged with one count of unlawful taking of a protected game species and one count of attempted taking of a protected game species. Both also received two charges of abandoning the swans after they were shot. In addition to penalties associated with the charges, Young and Munson each face a civil penalty of $1,500 restitution for shooting the swans if convicted.

Background about the trumpeter swan restoration from the DNR: Prior to the settlement of Iowa, trumpeter swans (Cygnus buccinator) nested throughout the state. However, wetland drainage and unregulated hunting of trumpeters soon brought their demise. Until 1998, the last wild nesting trumpeter swan in Iowa occurred in 1883 on the Twin Lakes Wildlife Area southwest of Belmond, in Hancock County. In 1998, three cygnets hatched from a wild nesting trumpeter pair in Dubuque County. This pair hatched 5 in 1999 and 5 again in 2000.

In 2000, a second pair nested on a Winnebago County Conservation Board wetland, (Russ Tract at Thorpe Park) 7 miles west of Forest City. This pair had 5 eggs. Unfortunately none hatched. We did, however, add a 6th egg and it hatched, providing this pair with a young cygnet to help bond the pair to the wetland nest site.

Trumpeter swans were first given nationwide protection in 1918 when the United States, Canada, and Mexico signed the International Migratory Bird Treaty. A nationwide swan count in the early 1930’s showed that only 69 existed in the continental United States, with all those occurring in Red Rock Lakes National Wildlife Refuge in southwest Montana.

In 1993, the Iowa Department of Natural Resources developed a plan to restore trumpeter swans back to the state. Our goals are to: (1) establish 15 wild nesting pairs back to the state by the year 2003 and (2) use the swans to promote the many values of wetlands not only for wildlife habitat but for water quality and flood reduction.