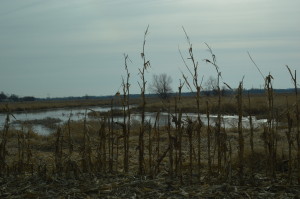 GMO Awareness of Cedar Rapids is hosting a documentary screening on Jan. 18, 2015, at the Cedar Rapids Public Library. (photo/Cindy Hadish)

A new group in Cedar Rapids has formed to educate the public about genetically modified organisms.

GMO Awareness of Cedar Rapids began meeting in November and is already hosting its first big event: a free screening of the award-winning documentary, “Genetic Roulette,” on Sunday, Jan. 18, 2015, at the Cedar Rapids Public Library.

Bethany Jensen learned of GMOs about 3 years ago, and she said, “the more I learned, the more concerned I became.”

“Eventually I realized that the majority of people were in the dark about this issue and that there were not any action groups around the Cedar Rapids area educating the public on this very serious issue,” Jensen said. “At that point, I decided to start GMO Awareness of Cedar Rapids. Our goal is to simply educate the Cedar Rapids area.”

The group strongly supports organic, local and of course, non-GMO, she said.

Here is more about the film and the event from GMO Awareness of Cedar Rapids:

The screening will be held in the beautiful Whipple Auditorium at the Cedar Rapids Public Library. Don’t forget to arrive a little early to get signed up for prizes, visit with some of our sponsors and get settled in with your snacks! Hope to see you there!

Genetic Roulette: The Gamble of our Lives
A film by Jeffrey M. Smith | Narrated by Lisa Oz
When the US government ignored repeated warnings by its own scientists and allowed untested genetically modified (GM) crops into our environment and food supply, it was a gamble of unprecedented proportions. The health of all living things and all future generations were put at risk by an infant technology.

After two decades, physicians and scientists have uncovered a grave trend. The same serious health problems found in lab animals, livestock, and pets that have been fed GM foods are now on the rise in the US population. This documentary provides compelling evidence to help explain the deteriorating health of Americans, especially among children, and offers a recipe for protecting ourselves and our future.

Genetic Roulette has won the 2012 Movie of the Year by the Solari Report and the Top Transformational Film of 2012 by AwareGuide!
Jeffrey M. Smith, author of the world’s bestselling book on GMOs, Seeds of Deception, is a leading consumer advocate promoting healthier non-GMO choices.

A special thank you to our wonderful sponsors: