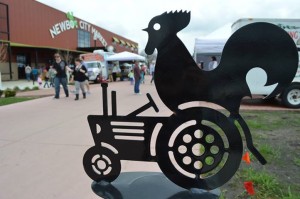 NewBo City Market in Cedar Rapids has plans to add new permanent vendors, but will drop its lunch hours from Monday through Wednesday. (photo/Cindy Hadish)

NewBo City Market is continuing its plan to expand the number of permanent vendors inside the market at 1100 Third St. SE, but leaders have decided to continue the search for merchants.

At the same time, the market announced that lunches will no longer be served from Monday through Wednesday by select merchants, which will likely come as a disappointment for people who live and work in the area and had appreciated the extra lunch options offered there.

Matt Georges, one of the owners of Greyhound Deli, said it wasn’t the vendors’ choice to end the lunches.

“We were pleased with the turn-out mostly,” he said, adding that the only way NewBo might reopen during that time is for people to talk to the office staff to let them know they would like to bring back lunches.

In the meantime, Georges said, lunch-goers can stop by Greyhound Deli’s second location inside the Cedar Rapids Public Library.

Here is more from NewBo City Market on its plans, hours and the expansion of three permanent vendors, including Greyhound Deli, at additional locations:

Since we announced our plans to expand our merchant base last November we’ve been overwhelmed by support from our community and applications from aspiring merchants. NewBo director Kristie Wetjen says, “The response to the expansion has been great! We’re working through applications, and have already moved a few applicants onto the next step.”

Winter Hours:
After a busy holiday season, our hours have changed. Although select merchants will no longer serve lunch Monday – Wednesday, we’re once again back with these hours:
Thursday: 10am – 8pm
Friday: 10am – 6pm
Saturday: 10am – 6pm
Sunday: 10am – 4pm

and when it involves our merchants, we couldn’t be prouder!

Three of our anchor merchants have newly expanded their businesses outside of the Market. But don’t worry – they’ll still keep their spots at NewBo.

We’re pleased to announce that Greyhound Deli, Caribbean Kitchen and That One Cupcake Place all opened additional locations in Linn County, two of them in Cedar Rapids.

It feels good to see our merchants succeed, but it feels even better to see new, locally owned storefronts pop up in our community that you can’t find anywhere else! When you get a chance, be sure to check them out:

Greyhound Deli
Location: Cedar Rapids Public Library
Hours: Open during regular library hours.
Greyhound’s new location celebrated its grand opening last Saturday on January 17 and they made sure to bring a taste of NewBo with them. You can pick up pastries from fellow merchant, Betty & Bobo’s Better Breads and espresso from Roasters Coffee House. The new location will also feature a drive-thru window open at 6:30 AM, starting in February.

That One Cupcake Place
Location: 766 N Center Point RD, Hiawatha
Hours: Mon-Fri 10:00AM-7:00PM, Sat 10:00AM-4:00PM
That One Cupcake Place also opened a stand-alone shop in Hiawatha. Stop by to try one of their 50+ rotating flavors, or place a special order for your next big event.