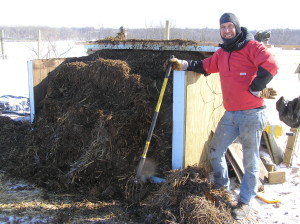 Rich Schuler is shown by the compost system. (photo/Practical Farmers of Iowa)

The Practical Farmers of Iowa group is always looking for ways to make Iowa farming more sustainable. That includes the expenses involved, as well as the resources used in production.

This latest innovative project holds promise in holding down costs while using a renewable energy source. It just makes sense.

Here is more about a new way to heat high tunnels – also known as hoophouses – from Practical Farmers:

NEVADA, Iowa — Raising high-quality fruit and vegetables requires a few key resources: quality seed, adequate sun and water, healthy soil – and the ability to withstand volatile weather like hail. More farmers are turning to high tunnels to protect crops, as well as to expand the growing season and capitalize on early- and late-season markets.

These resources come at a cost: Many farmers need to purchase soil amendments, like compost, and then pay to truck it in. For those with high tunnels, many pay for supplemental heat to protect early- and late-season crops from unpredictable temperatures. For many fruit and vegetable farmers, these added costs are another drain on the budget at a time when cash flow is already tight.

But what if farmers could use one system to get both compost and heat? An innovative on-farm project by Practical Farmers of Iowa is doing just that: using waste heat from composting to protect delicate crops inside high tunnels during spring and fall cold spikes. This innovative project uses the concept of “trickle charging” to heat soil inside a high tunnel.

The system started heating a portion of the high tunnel soil shortly after the crop was planted in early April at TableTop Farm near Nevada. The novel system increased soil temperatures by 5 degrees during the mid-April cold snap – equivalent to more than 5 gallons of liquid propane for the 300-square-foot test plot. Sally Gran, who runs TableTop Farm, says the boost was a nice surprise – especially in comparison to her heating costs last year. Such a system could become a viable way for other fruit and vegetable farmers to cut costs and better manage fickle temperature swings. 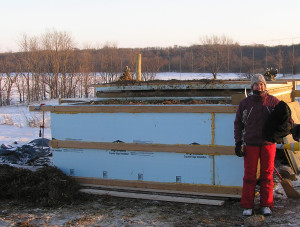 For Sally Gran at TableTop Farm, shown here by the compost, the system means self-reliance and a more sustainable way of farming. (photo/Practical Farmers of Iowa)

“Last year we installed a $1,400 propane heater in the high tunnel and spent an additional $1,200 on LP,” Sally says. “The cost was unsustainable for the farm budget and didn’t really fit with our energy use philosophy. This time of year, we’re hovering around freezing, and 5 degrees can be the difference between a plant living and dying.”

How the system works

Rich Schuler, energy consultant with Practical Farmers, says trickle charging the soil in a high tunnel works the same way as in a car battery: A large battery delivers a flood of current to an electric motor when the engine is started; the depleted battery is then charged by the alternator when the car is driven.

The compost system operates the same way. An insulated 1,100-gallon water tank acts as the battery, which is trickle-charged by the heat extracted from the aerobic composting process over time. When heat is needed in the high tunnel during a cold snap, a pump moves hot water from the tank into tubing in the soil. The pump is turned off at the end of the cold period, and trickle charging of the water tank resumes.

Most materials for the system are common hardware store items: plywood, foam board insulation and PVC pipes. Other components include the pumps, blower, stainless steel tubing and four 275-gallon food-grade plastic totes.

“The system was designed to use very little electricity,” Rich says, adding that it’s been operating off-grid on a single 140-watt solar PV panel. “An important goal of the project is to put alternative hardware in the field that is not nearly the cost of other renewable technologies. Materials for the prototype system cost roughly $7,000, including the solar PV components. The next goal will be to build a system with 80 percent of the performance of the prototype, at 20 percent of the cost.”

“In the future, society will have to make do with trickles of energy, rather than the flood of energy derived from readily accessible – but dwindling – fossil fuels,” Rich says. “Aerobic bacteria can provide that continuous trickle of energy and are a long-term source of generating on-farm energy in the form of heat.”

Another benefit of the Practical Farmers project, he adds, is that it produces high-quality compost directly on the farm with less labor, machinery and fuel than most methods. Rich explains that aerobic composting requires the right mix of ingredients (carbon, nitrogen and water); the right conditions (temperature and oxygen); and proper management to yield high-quality, nutrient-rich and biologically-diverse compost. If a compost pile or windrow is not periodically turned to allow oxygen to enter, the entrained oxygen will be depleted, and it will become anaerobic.

“Under anaerobic conditions, useful fungi and bacteria die off. When the fungi die off, the anaerobic colony releases ammonia, and the loss of nitrogen and biological diversity results in a pile with greatly reduced value as a soil amendment – a lower-value product,” he says. “The PFI compost heat system is designed to eliminate the need to turn the compost by forcing air through the insulated compost box with a solar-powered blower.”

A blower provides an adequate supply of oxygen to the compost and works with two heat exchangers to stabilize the compost temperature between 131 and 150 degrees. “After the warmest phase of the composting process, the material in the compost chamber is moved outside to finish curing before field application,” Rich says. “The system is then loaded with fresh material, and the process starts over again.”

For Sally Gran at TableTop Farm, the system means self-reliance and a more sustainable way of farming: “It’s important for us to be as self-reliant as possible. Anytime we can use resources available on our own farm, it lowers our ecological footprint. Saving money on compost and high tunnel heat purchases is an added bonus.”

Practical Farmers’ Energy Program is designed to help farmers reduce off-farm inputs and carbon footprints. The compost heat project is funded by The Ceres Foundation, Soper Farms and the members of Practical Farmers of Iowa.

Founded in 1985, Practical Farmers of Iowa is an open, supportive and diverse organization of farmers and friends of farmers, advancing profitable, ecologically sound and community-enhancing approaches to agriculture through farmer-to-farmer networking, farmer-led investigation and information sharing. Farmers in our network produce corn, soybeans, beef cattle, hay, fruits and vegetables, and more. For additional information, call (515) 232-5661 or visit www.practicalfarmers.org.