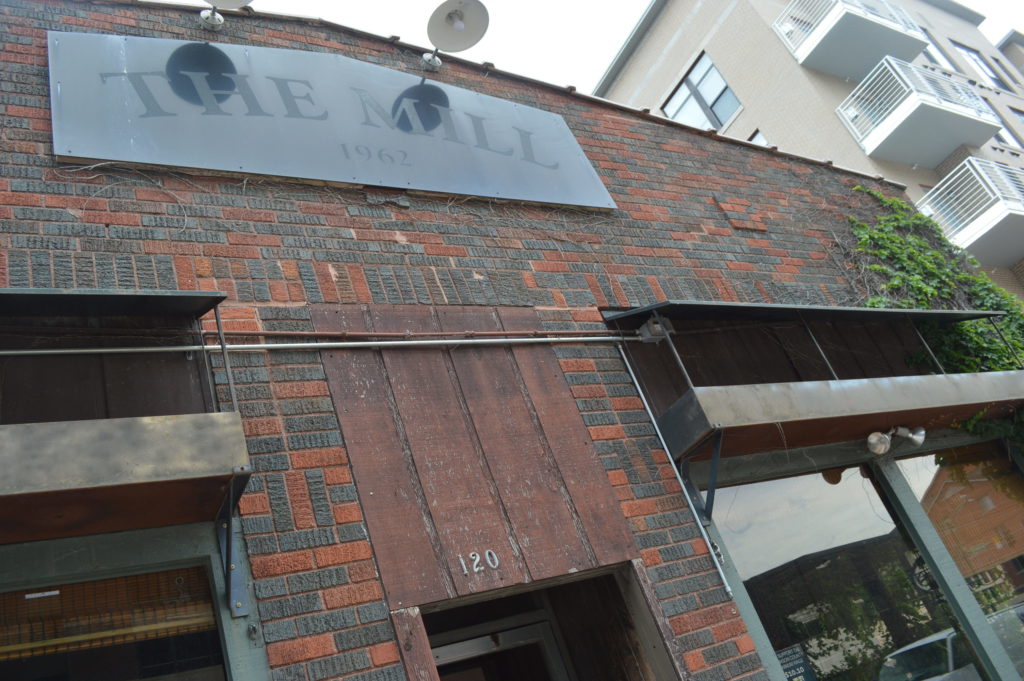 Efforts are underway to save The Mill restaurant in Iowa City, which opened in 1962 and closed in June 2020. (photo/Cindy Hadish)

Scores of musicians, presidential hopefuls, writers and other luminaries have passed through the doors of The Mill in Iowa City during its storied history. 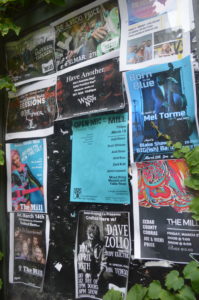 Posters of some of the performers who have appeared at The Mill hang outside the building on June 26, 2020. (photo/Cindy Hadish)

Now, advocates hope that legendary past will serve as a lifeline to help carry the restaurant and live music venue into the future.

“I love The Mill and I really love Iowa City,” said Carrie Meyer, who is co-leading efforts to save the restaurant after learning it was closing last week. “I just think certain pieces of the city should be preserved.”

On June 18, owners announced the closure of The Mill, at 120 E. Burlington St.

“After 17 years of keeping the Mill going through its 58th year in business, it’s time for us to step away,” they posted on Facebook. “We hope that someone else might want to take over the mission to preserve this institution. It’s a cool place and important to a lot of people in Iowa City. Thanks to everyone for their support!”

Meyer, who worked at The Mill several years ago, and Alicia Trimble, owner of Three Cottages Historic Preservation Consulting and Rehabilitation, are teaming up with other advocates who hope to have the building designated as a local historic landmark.

The process is extensive. 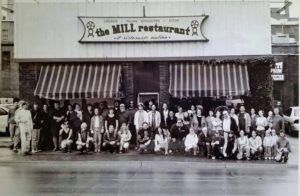 Staff and friends of The Mill gather for a photo when the restaurant closed briefly in 2003. (photo/courtesy Owen Wagner)

Trimble — who met her husband at The Mill — is researching the history of the building and the two are recruiting other volunteers to join in the efforts through a Facebook group called Save The Mill – A Living Landmark.

Meyer said volunteers are being assigned newspaper archives to research to find events or people of historical significance associated with The Mill.

They are also asking group members to sign a letter to the building’s owner, Marc Moen, asking him to support the landmark designation, and are looking for exterior photos of the building, which dates back to the 1920s.

Through research so far, Trimble has found the building started as an automobile dealership, Nall Chevrolet, in 1928, before becoming Chief Motor Sales in 1934. It went through a series of other car-related businesses before being used as the Montgomery Ward Farm Store from 1941 to 1962. 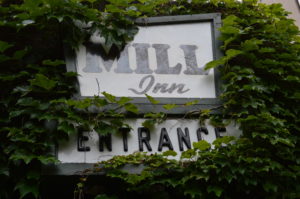 Although there are no known plans currently for the site, having the building designated as a local landmark would save it from demolition. In Iowa City, owners do not have to agree to the designation, but it lessens the number of City Council members who would ultimately need to vote in favor of landmark status.

The process, which can take a few months, also must pass through the city’s Historic Preservation Commission and Planning and Zoning Commission.

Iowa City currently has 59 individual landmarks, and reviews appropriateness of exterior building updates on a total of 1,554 properties.

Other cities, including Cedar Rapids, do not allow landmark designations without owner consent, resulting in demolitions of iconic structures.

Concurrently with the local landmark efforts, another group has started a Facebook page, Refounders of The Mill, to generate interest in re-founding it as a worker-owned, community-oriented entertainment venue and restaurant cooperative. 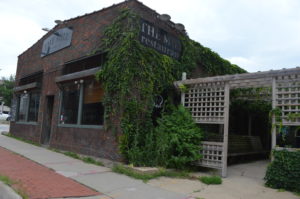 The Mill has been a mainstay in Iowa City since 1962. (photo/Cindy Hadish)

Keith Dempster opened The Mill in 1962 as a coffee house, restaurant and folk music venue, moving to its current location 10 years later. The Mill closed briefly in June 2003, but reopened under new owners Marty Christensen and Dan Ouverson just one month later.

Among the many celebrated local musicians who have performed inside the acoustically friendly setting of The Mill are Greg Brown, Bo Ramsey, Joe Price, David Zollo and Pieta Brown.

“Many of these people are significant to Iowa City culture and history,” Trimble said of the long list of performing artists and others who have made appearances at The Mill.

That point is significant in demonstrating one of the reasons for the landmark designation.

Under criterion “B,” buildings must be associated with the lives of significant people. Trimble notes that the building also qualifies under criterion “A,” an association with events that have made a significant contribution to the broad patterns of the city’s history, and criterion “C,” which pertains to the distinctive characteristics of a type, period or method of construction. 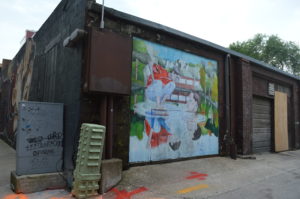 Rear doors at The Mill point to the building’s automobile-related origins. (photo/Cindy Hadish)

“I am not going to try to argue that the Mill is an architectural gem,”  she said, “but I do think it is representative of a 1928 car dealership.”

In the end, Trimble and Meyer hope the building’s past will keep The Mill alive to contribute to the city’s culture into the future.

“The Mill is tied in with pretty most all cultural, social, political movements that have happened in Iowa City for the last 58 Years,” Trimble said, “the last 48 of which were at its current location.”

As of June 27, 2020, more than 500 people had added their names to the letter that will go to building owner Marc Moen. Others interested in signing the letter, helping with research or providing old photos can join the Save The Mill – A Living Landmark Facebook page. 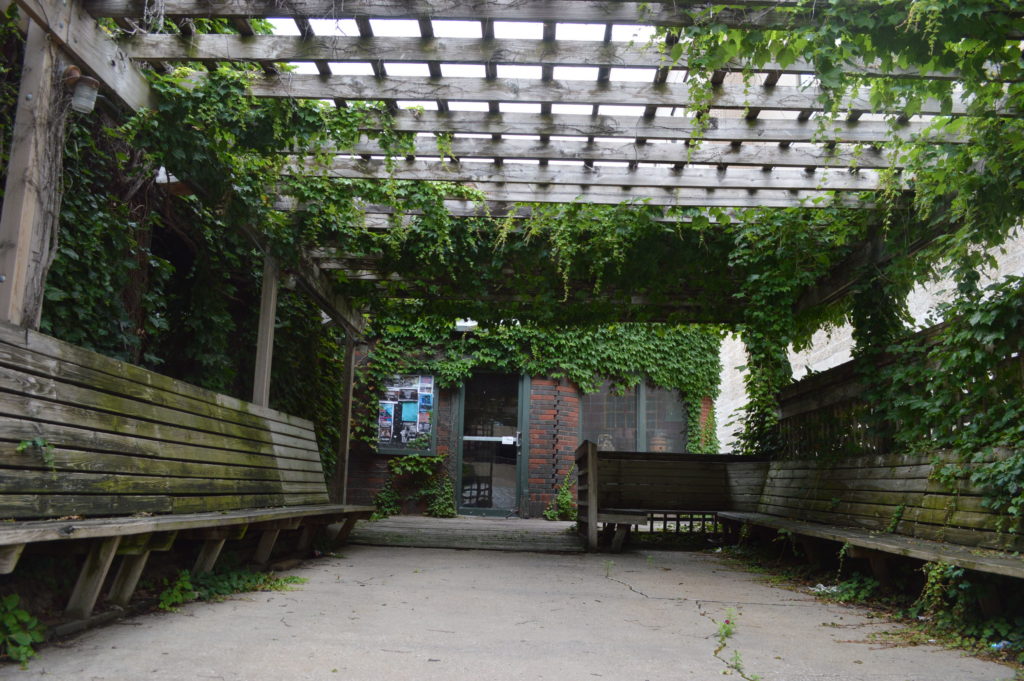 The outdoor patio of The Mill restaurant is shown in Iowa City, Iowa, on June 26, 2020. Advocates hope to have the building designated as a local historic landmark. (photo/Cindy Hadish)