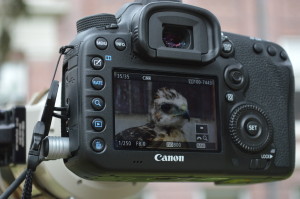 Meeting nature photographers Linda and  Robert Scarth today was both a pleasure and a bit surreal.

I watched as they set up their cameras in Cedar Rapids and joked with them about bird-watching. It turned out that’s exactly what they had in mind.

A young red-tailed hawk had fallen from its nest, or ventured out too soon, and was unable to fly. For nearly a week, its parents had brought rabbits, mice and other food to the bird, which sat on the steps of a building, and kept predators away with their screeches.

Linda said the young hawk appeared to be in worse shape today, compared to when they had seen it earlier in the week.

Anyone who watched the touching documentary “Pale Male” during this year’s EcoFest in Cedar Rapids might understand the excitement of seeing these hawks in the city.

Pale Male is the nickname given to a red-tailed hawk who has resided since the 1990s on a posh Fifth Avenue building across the street from Central Park in New York, and while New York’s hawk attracts thousands of spectators, the Scarths are keeping the location of the Cedar Rapids hawk under wraps, to avoid any potential problems for the fledgling.

I agree on that front, so I’m not using photos that give away our youngster’s location, but I’m thinking a call to the Macbride Raptor Project might be in order.

What do you think: let the parents handle this, or call in the outside experts?

See more about the young red-tailed hawk on Linda and Robert Scarth’s Field Guide blog: scarthphoto.com/wp and photos here from the Macbride Raptor Project during EcoFest 2015.