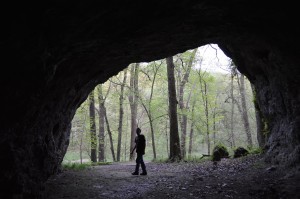 A visitor walks near the entrance of Horse Thief Cave at Wapsipinicon State Park near Anamosa. The park and other state parks remain open during the federal government shut-down. (photo/Cindy Hadish)

I won’t get into the politics of the federal government shut-down, but there’s no doubt that the measure – or lack of one – has left many people confused.

That extends to which entities are affected by the shut-down. I saw a TV news report that listed Honey Creek as one of the parks that would be closed. Turns out that was not accurate.

The Iowa Department of Natural Resources notes that Iowa’s state parks, even those on federal reservoirs, remain open during this time.

Calls are coming in to state park officers faster than they can be answered. Yes, Iowa’s state parks, including those like Honey Creek and Elk Rock that are on federal land, are open.

That’s the message being relayed during the federal government shutdown.

“It can be confusing about what is open and what isn’t, especially for parks on federal reservoirs,” said Jim Lawson, State Parks Bureau supervisor for the Iowa Department of Natural Resources. “But Iowa’s state parks are open for business as usual.”

For a listing of state parks, go to www.iowadnr.gov/parks

Facilities run by the U.S. Army Corps of Engineers, the National Monuments and Federal Refuges and other federal areas are closed during the shutdown.