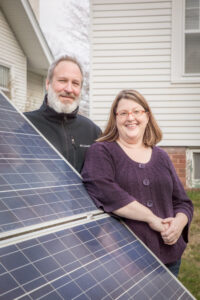 Chris and Eryn Cronbaugh are shown with their ground-mount photovoltaic system outside of their home in Cedar Rapids, Iowa. (photo/Brian Draeger, Draeger Photography)

Chris and Eryn Cronbaugh had multiple reasons to “go solar” with their home in Cedar Rapids.

The two cited their concern for the environment, a stewardship of the Earth’s resources and economics behind their decision to retrofit the 1929 home with a ground mount system.

“It seemed like a good thing to do for the planet,” Mr. Cronbaugh said. “Also, it made economic sense at the time we did it.”

The Cronbaughs used state and federal tax credits, along with a rebate from Alliant Energy to make the project affordable.

“For the price of a used vehicle, we realized we could do this and cut down on our electric bills,” Mr. Cronbaugh said of the system that was installed in 2014.

“Working photovoltaics have no moving parts, are relatively simple in design, need very little maintenance and are environmentally benign,” the center notes on its website. “They simply and silently produce electricity whenever they are exposed to light.”

“It’s starting to be more feasible,” said Mr. Otto, who has been building energy-efficient homes since 1978. “It’s certainly a thing that can pay for itself in seven to 10 years.”

He noted that a building’s site must be suitable for photovoltaic installation, with the roof properly orientated to the sun or space to install a ground mount system, as the Cronbaughs did.

Ms. Cronbaugh said the couple considered a roof system, but did not have enough south-facing roof on their home, located in southeast Cedar Rapids.

They also considered a tracking system, which follows the sun across the sky, but could not get the necessary equipment into their backyard, she said, citing that system’s higher cost as another facet in their decision.

The couple began their process by getting estimates and interviewing companies and individuals with solar expertise. Once they found the right “fit,” they needed to first update the electrical panel in their home from a fuse box to a breaker system.

They decided to size the system so it would cover about four-fifths of their energy needs, opting for a 4.5 kilowatt ground mount system, spanning about 27 feet from end-to-end and more than 10-feet-high in their backyard.

The 15 panels have microinverters – meaning there is an inverter for each panel – which reduces problems with shading and increases efficiency for each panel.

Three galvanized steel posts are anchored into the ground, with concrete footings to support the steel rack for the panels.

Ms. Cronbaugh said the system is tied to the energy grid, so it inverts energy at the panels, then runs to the house where the couple’s energy production and consumption are calculated by a dual meter on the house.

“In the summer, we obviously produce more because there are more daylight hours, but we typically have consumed more as well, because we’re running the air conditioner,” Ms. Cronbaugh said.

Alliant lists a credit when their system produces more than they use, which can be used in the future.

“Sometimes we are about even, which leaves us with a bill that is the basic connection fee to the grid,” Ms. Cronbaugh said. “Other times, we do pay, but it’s certainly nowhere near what we’d pay without our solar.”

“I think it’s a wonderful thing we can do for ourselves, for our pocketbooks and the Earth,” he said of solar energy. “It’s an added expense now, but it pays you back in the future.”