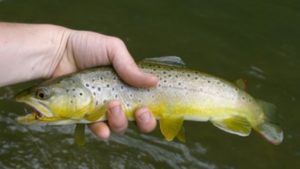 CEDAR RAPIDS – Iowa’s only urban trout stream suffered a setback this week, when more than 2,000 fish were killed after a break in a water main caused treated water to spill into McLoud Run in Cedar Rapids.

The Iowa Department of Natural Resources reported the following on Tuesday, Aug. 1:

A break in a 16-inch water main led to a fish kill over about one mile of McCloud Run in Cedar Rapids yesterday.

The break occurred when a valve failed near McCloud Bridge shortly after 2 p.m. Monday, causing treated drinking water to gush into the stream. Chloramine, which is used to disinfect water, is harmful to fish and other aquatic organisms.

The DNR will take appropriate enforcement action, including asking for fish restitution.