World’s largest tenderloin, giant Gunderburger and ethnic cuisine, all along one Iowa route

UPDATE (July 31, 2019) The Irish Shanti in Gunder stopped service as of earlier this summer and the business is being sold. Nathan Trappe of Allen Real Estate Company said a local group had been interested in reopening the restaurant, but that proposal didn’t come to fruition. For a private showing or more information, call him at 563-539-4136. 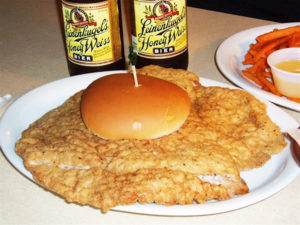 Twisting its way through Northeast Iowa, the River Bluffs Scenic Byway (RBSB) encompasses 109 miles of backroads within Fayette and Clay­ton County. Aptly named, the by­way’s scenic highlights include the waterways and geology that shape the scenic views one sees along the drive. Follow the byway signs as the road dances next to, over, and around the rushing waters of the Turkey, Volga, and Mississippi Rivers and their river valleys and weaves among the rolling hills, rock formations, and rugged limestone outcroppings of the area. The RBSB corridor contains several restaurants that offer unique local flavor made of local ingredients. Just as the RBSB passes by diverse scenery from rivers to bluffs to farmland, so are the byway’s local restaurants, offering a diversity of flavors to suit all palates.

Perhaps most prominent are restaurants featuring classic Midwestern American food cooked to perfection. One R’s St. Olaf Tap in St. Olaf is “home of the world’s largest tenderloin” and arguably the world’s best pork tenderloin. The tenderloin is made from scratch fresh each day of local pork that is butchered, expertly cut and trimmed, hand-pounded and tenderized, and breaded just a few hours before it is served. You will find that your eyes are larger than your stomach when it arrives at your table served as a strip of tenderloin longer than your plate, topped with fresh local lettuce, tomato, and a homemade bun from Pedretti’s Bakery in Elkader. 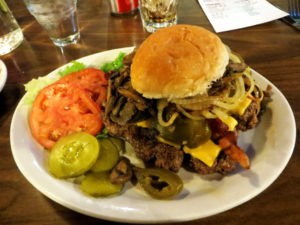 The Irish Shanti in Gunder was propelled to fame by its extra-large “Gunderburger.” (photo/River Bluffs Scenic Byway)

Keeping with the theme of giant sandwiches, a local legend is the Irish Shanti in Gunder, propelled to fame by its notorious “Gunderburger.” Over time, as the Gunderburger gained notoriety, it has evolved into epic proportions: one pound of Iowa beef one inch thick on a homemade bun. What is most striking about the Gunderburger is how it arrives – one massive hamburger patty the size of your plate contrasted with a regular-sized hamburger bun. If you saved room for extra toppings, Gunderburgers come in six different varieties: plain, cheese, mushroom-Swiss, bacon-cheese, jalepeño-Swiss, and loaded. Most diners split the burger or take a portion home, but if you can finish the Gunderburger in one sitting, you get to wear the special hamburger hat and earn Gunder-sized bragging rights.

Reflecting the diversity of cultures that have shaped the RBSB corridor is Schera’s Algerian American Restaurant & Bar in historic downtown Elkader. Schera’s is short for Scherezade, the heroine of “1001 Arabian Nights” and the name pays homage to Algerian hero Emir Adb El Kader, the namesake of Elkader which is the only US city named after a Muslim leader. The menu offers a mix of Algerian food, North African dishes, and American food that can be found nowhere else locally and regionally. Schera’s has become a culinary and cultural destination, drawing travelers from across the US and being featured on NPR and CNN. The Algerian Combo Platter is highly recommended for those that are new to Algerian food, and American classics like fish sandwiches, burgers, and onion rings please all. Schera’s is also a destination for beer geeks because of the large selection of eclectic beers from around the world and local Iowa breweries. 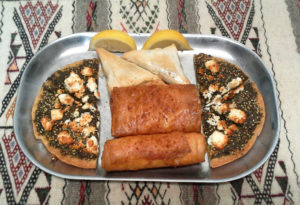 The RBSB byway passes through two communities that are along the Iowa Wine Trail in the Upper Mississippi River Valley American Viticulture Area. The vineyards and wineries in this area operate among the unique geologic and topographic environment that makes the RBSB corridor so famous. This terroir produces wines of distinct taste and flavor which can be found in Marquette at Eagle’s Landing Winery or in Guttenberg at PromiseLand Winery. Stop by their tasting rooms to try a sip, or pick up a bottle to bring home for a special occasion.

The River Bluffs Scenic Byway is a special place where the region’s natural beauty, recreational opportunities, historic past, and local culture merge, resulting in a unique blend of flavors, adven­tures, and stories awaiting those who visit. It is a scenic byway, so driving to the local eateries is an experience upon itself! For more information on travelling the RBSB, please visit www.iowabyways.org.

Find this article in the August 2017 edition of City Revealed magazine and discover more about Iowa’s Scenic Byways, below: