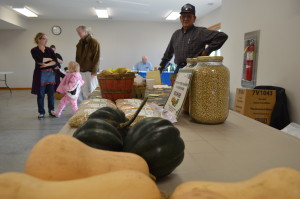 URBANA – I made baba ghanoush today, thanks to a short trip I made Saturday to the indoor farmers market in Urbana.

The key ingredient, eggplant, isn’t easy to find in Iowa in November, but there it was, at Marion Moser’s table, along with squash, potatoes, apples, daikon radishes and organic Moser’s Garden popcorn.

Now 88-years-young, Mr. Moser was a traditional crop farmer before entering the vegetable/farmers market circuit during the 1980s farm crisis. Not too long ago, his wife, Virginia, would have been selling alongside him, but her health issues have left Marion alone at the Moser’s Garden booth. 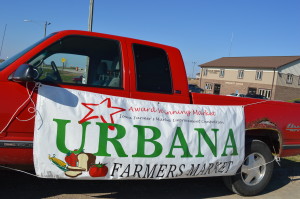 The indoor Urbana Farmers Market is held in the Community Room below City Hall, just off Interstate 380, on the second Saturday of the month through March. (photo/Cindy Hadish)

In the summer, he hits five markets, five days of the week. In the winter, you can find him at the monthly market in Urbana, along with vendors selling vegetables, pies, kolaches and other baked goods, and handcrafted, hand-stitched, handmade gift items.

It’s encouraging that several winter markets are continuing their run this season in Eastern Iowa, along with at least two new locations. Read more about those in the article below.

In the meantime, here are my Top 5 Reasons to Shop at a Farmers Market, even in the winter:

1) The vendors. For some reason, friendly people seem to be attracted to the job of  farmers market vendor. Or maybe they become friendly after years of doing that work. In either case, they might not all be as nice as Marion Moser, but it’s rare that you’ll encounter a surly market vendor. 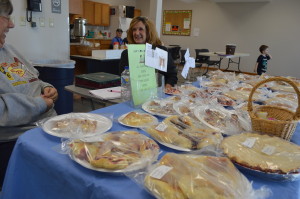 2) Fresh is best. Other than growing your own, the vegetables that Marion and other growers have harvested are about as fresh as you can get. Fresh fruits and vegetables are higher in nutrients than older produce that has been shipped thousands of miles to your grocery store. Also, many Iowa growers are now using hoop houses, or high tunnels, that extend the Midwest growing season to nearly year-round.

3) Keeping it local. When you buy at your local farmers market, that money stays local and supports your local growers, farmers, craftspeople and others who are trying to earn a living doing what they do best. 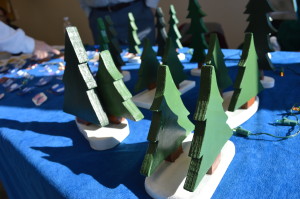 Wooden crafts and jewelry are among the items sold Saturday, Nov. 9, at the indoor Urbana Farmers Market in Iowa. (photo/Cindy Hadish)

4) Cost. I’m not sure where the idea came about that buying organic or buying fresh is more expensive. At most farmers markets, the prices are competitive with what you’ll find in grocery stores, if not less expensive.

5) Building community. I think Ali Alldredge, co-manager of Ely’s farmers market, says it best in the article that follows, but farmers markets bring together the people who live in a town, or like me, travel a few extra miles to shop at a farmers market, along with the vendors, volunteers, market coordinators and others who meet face-to-face, to know where your food is coming from and have a discussion about it. I like the fact that I learned something from Marion Moser – at least a little insight into his life and why he does what he does after so many years. It’s nice, too, to make baba ghanoush in November.

Back in October, I mentioned the wonderful indoor market in Mount Vernon and others in this area. Learn more about new locations for winter farmers markets in the following article, which also appeared in the Corridor Business Journal.

Cassidy Bell, Iowa City’s market supervisor, said the mall has greater visibility than the indoor market’s previous site at an elementary school, along with its own customer base.

“It’s something vendors and customers have been asking about for quite awhile,” she said, noting that changes at the mall made the timing right. “It’s hopefully going to be mutually beneficial for the mall as well as the market.”

Farmers market hours will be 10 a.m. to 1 p.m. every Saturday from Nov. 23 through April 26, except Dec. 14, when the second Holiday Market takes place at the Robert A. Lee Recreation Center, 220 S. Gilbert St.

Last season, the indoor farmers market took a hiatus for most of the winter, before resuming in March at Grant Wood Elementary School, 1930 Lakeside Drive, where it had operated for two years.

Ms. Bell said some customers had difficulty finding the school and challenges also arose because the market was not held on a regular basis.

Having a consistent schedule at the more visible location should help attract and retain customers, she said.

Ms. Bell noted that up to 35 vendors are expected to fit in front of empty storefronts in the mall’s main aisle between Panera Bread and the former Von Maur location, with at least 15 signed up for the first market.

Sycamore Mall previously had an outdoor farmers market, held during warm weather months until this year, after which some of the vendors moved to the new market at Mercer Park, 2701 Bradford Drive.

In September, architect and engineering firm Shive-Hattery and CORE Realty Holdings, the mall’s owner, announced a rebranding effort to turn the 44-year-old Sycamore Mall into the Iowa City Marketplace.

Representatives pointed to incorporating national trends into Iowa City’s commercial market, allowing for a variety of uses at the shopping center.

The main concept removes leased space to provide interior and exterior areas for social interaction, including a new exterior plaza at the former main entrance.

Amidst those changes comes the farmers market.

As it did at Grant Wood, the indoor market will offer homemade baked goods; local produce and meats and handmade gifts, among other items for sale.

The mall isn’t the only new indoor farmers market option in Iowa City.

A market also is starting this month at the Johnson County Fairgrounds, 4261 Oak Crest Hill Rd. SE, which will operate twice-monthly on Sundays from 11 a.m. to 2 p.m.

Indoor markets can provide a more stable income for producers like Lois Pavelka of Pavelka’s Point Meats in rural Mount Vernon, who can  sell the farm’s lamb, pork and beef during the off-season at the markets, in addition to restaurants.

“I not only appreciate winter markets, we need these markets as our livestock continue to be ready for processing year-round,” said Ms. Pavelka, a Fairgrounds market vendor. “Without these markets I would be looking for alternative places to sell our meat during the winter.”

She noted that she previously had to make arrangements to meet customers at an Iowa City service station driveway to sell meat throughout the winter.

Ms. Pavelka is also a vendor at the indoor Mount Vernon farmers market, which began its winter season Nov. 2 at the Community Center, a former school.

Mount Vernon, Urbana and Ely are among Iowa towns with successful winter markets, boosting the off-season opportunities for farmers and other producers to sell their meat, honey, fall vegetables and produce grown in hoophouses and greenhouses, along with handcrafted items.

Located between Iowa City and Cedar Rapids, Ely has had an indoor market for the past few years at its public library, with a notable partner in the Economic Development Group of Ely, or EDGE.

Citing the synergy between the two entities, Ali Alldredge, co-manager of Ely’s market, said some vendors have used Ely’s market as a development ground for their businesses.

“We see a few people trying out their cottage industry here before trying out the big markets,” she said, adding that others use the market to promote their online businesses.

“The skills and relationships they have earned will carry into future economic development,” she said.

Although some competition exists between the small-town markets and the NewBo City Market in Cedar Rapids, which celebrated its first anniversary in October, advocates say each site serves its own niche and adds to the variety of local foods options.

The NewBo City Market, 1100 Third St. SE, serves as a public market, with a variety of permanent vendors selling prepared foods such as pizza, ice cream and ethnic dishes that customers can eat on-site or take home. In addition, guest vendors sell fresh produce and other products in-season.

Cedar Rapids also boasts a unique local foods option in the Iowa Valley Food Co-op, which uses an online ordering system for its members. Items are picked up during monthly distribution days.

Just as some of the co-op producers provide their products at multiple venues, Ms. Alldredge said she has seen the same with Ely’s vendors.

The farmers market helps cross-link businesses within the local economy, she said, so producers develop relationships with local restaurants and stores.

“I think the relationships that form and the collaboration between vendors, customers and city volunteers willing to support community ventures are the biggest impact,” Ms. Alldredge said. “I see a lot of ideas being exchanged and a lot of mentoring, and that helps build communities.”

See a list of indoor markets operating in Eastern Iowa during the 2013-2014 season.