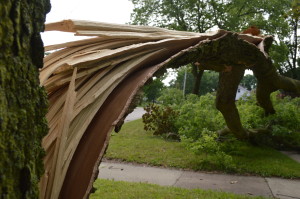 Recent storms damaged numerous trees in the Midwest, including this one in Cedar Rapids, Iowa. (photo/Cindy Hadish)

Even before this week’s damaging storms wreaked havoc in the Midwest, our trees were suffering.

Homegrown reader Grant Carter noted that he was seeing more dead trees than usual this spring and summer, including many arborvitae.

Patty Petersen, Trees Forever Field Coordinator and a certified arborist, said Iowa’s trees have been under stress in recent years, with summer droughts and the past winter’s extreme  cold. Those factors played a role in the widespread storm damage, in which numerous trees were nearly broken in half or giant limbs fell.

If you had damage to your trees during the recent storms, read on for more advice from Trees Forever: 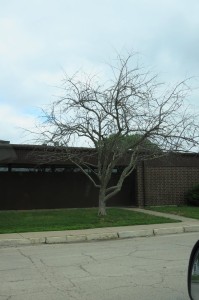 Even before the most recent round of storms, many of Iowa’s trees were affected by years of drought and extreme cold, such as this one in Cedar Rapids. (photo/Grant Carter)

As the Midwest recovers from the latest round of devastating storms, the staff at Trees Forever offers safety reminders and a look to the future for re-establishing the landscape of our communities.

“At Trees Forever, our hearts go out to those who have lost loved ones, property and trees,” said Shannon Ramsay, Founding President and CEO of Trees Forever, nationally headquartered in Marion. “We each feel a personal sense of loss when trees near our homes or in our neighborhoods are lost.”

Patty Petersen, Trees Forever Field Coordinator and an ISA Certified Arborist, encourages homeowners to use caution when cutting trees and stressed safety, especially around power lines, which should always be considered “live” and avoided, even if the lines are not touching the tree. She also advised ensuring that equipment is operating properly and to take breaks during clean up.

Once fallen branches have been cleared, Petersen said the first step in landscape recovery is making a visual assessment of the damage. Jagged breaks on trees should be properly pruned, so limbs can seal, lessening the potential spread of decay. Trees with more than one-third of the outer bark gone and those that have been “topped” by the wind are at risk for future damage, so property owners should consider removal, Petersen said. The same is true for ash trees that sustained storm damage.

“People should consider removing their green ash, rather than investing in corrective pruning,” she said, noting that the spread of Emerald Ash Borer likely means the trees will eventually need to be replaced. Petersen said trees already have been under stress after summer droughts and an exceptionally cold winter, which played a role in the widespread damage. Moving forward, if suitable replacement trees are unavailable immediately, it is best to wait until this fall or next spring to replant, as summer weather generally is not conducive to planting.

Both Petersen and Ramsay hope that property owners will consider replanting a diversity of large shade trees, except under power lines. “Without trees, property values decrease and communities are not attractive to businesses or residents,” Ramsay said. The Trees Forever website, at www.TreesForever.org offers suggested tree varieties for planting in the Midwest.