Unveiling the mystery of CSAs 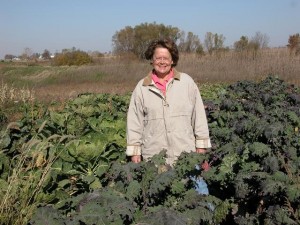 Laura Krouse stands in her kale field at her farm near Mount Vernon. Abbe Hills Farm has one of a growing number of CSA programs in Iowa. (photo courtesy of Laura Krouse)

Even as they grow in numbers, Community Supported Agriculture programs remain a mystery to many Iowans.

Members of the programs, known as CSAs, pay an annual fee upfront to receive weekly shares of a farm’s fresh produce for several months during the growing season. In return, the farmers have a guaranteed source of income and the programs allow customers to share in the farming risk.

According to the state Department of Agriculture and Land Stewardship, Iowa’s CSAs nearly doubled in the past several years, growing from 50 in 2006 to more than 90 in 2012.

“People considering joining a CSA should probably go look around the farm and meet the farmer,” said Laura Krouse, owner of Abbe Hills Farm near Mount Vernon. “Does it seem like they are giving you the whole story?  Everything is not always the way it appears on the website.”

Krouse said she tries to keep the growing process as transparent as possible and encourages people to visit her farm.

Jerry Oakland, of the Matthew 25 Ministry Hub, said members of the non-profit’s CSA receive fresh produce from the group’s urban farm in Cedar Rapids for 20 weeks beginning in June. 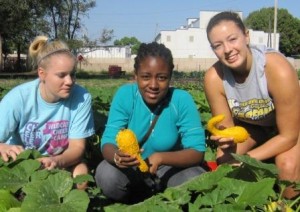 Lettuce and other greens are predominant in the early season for Matthew 25 and as the season progresses, members receive more traditional produce, such as squash, beans, tomatoes and more.

The cost to join a CSA varies. At Matthew 25, that price is $400, with shares half-price for residents of the Taylor and Time Check neighborhoods in Cedar Rapids. It’s that flood-damaged neighborhood where Matthew 25 is growing its urban farm.

Matthew 25 is adding a new element to this year’s CSA. Members can sign up for a bread share for $120 for 20 weeks. BoBo’s Better Breads of the NewBo City Market will provide one loaf of light colored wheat bread and one loaf of a light rye bread weekly.

Abbe Hill’s Krouse also has something new: she added a Facebook page as part of her farm’s transparency, to show people updated photos throughout the growing season.

“Works OK if you grow all great stuff,” she said, adding that she is committed to giving the best produce to her CSA members. “If not, the shareholders might not get what they deserve.”

Memberships for Abbe Hills Farm CSA range from $260 to $440, with scholarships available for families that cannot afford the full share price.

Several other CSAs are located in Eastern Iowa.  A list throughout the state can be found at: www.localharvest.org or a list of CSAs in central Iowa can be found on the Practical Farmers of Iowa website at www.practicalfarmers.org under “local foods.”