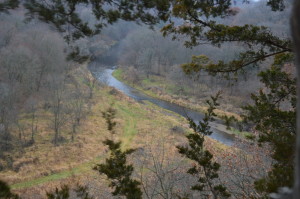 An Iowa hog producer has been fined for a manure spill that reached a creek. (photo/Cindy Hadish)

Back in November came news that several thousands of gallons of manure had blown out of a clean-out port on a southeast Iowa hog confinement facility, making its way to a creek that runs to a major river.

Today, the Iowa Department of Natural Resources announced that Maschhoffs LLC has agreed to pay a $10,000 fine and to make improvements to prevent future issues at its facility.

The agreement was a consent order, basically a document signed by the Maschhoffs and DNR Director, Chuck Gipp.

A DNR representative called the consent order “the most effective way… to avoid future discharges.” No reference, of course, was made to the root of the issue in having 7,500 hogs in one facility.

Here is the DNR report:

A southeast Iowa hog producer has agreed to make significant improvements at its facility near Keosauqua to prevent future manure discharges as outlined in an administrative consent order.

The Maschhoffs LLC has also agreed to pay $10,000 in fines following a manure discharge that occurred at the facility that houses approximately 7,500 sows in November. The company reported the spill to the Iowa Department of Natural Resources (DNR) after an employee pulled plugs from a shallow pit under one of the swine buildings and an underground pipe clogged causing an overflow into a dry creek bed.

In the consent order, The Maschhoffs agree to repair the plumbing system and the connection points at the collection sump, as well as any other remedial measures determined necessary by a final report being prepared by an engineering firm.

Under terms of the consent order, which has been signed by The Maschhoffs and DNR Director Chuck Gipp, significant investment will be made by the company to repair the manure storage system at the facility.

“A consent order like this is the most effective way of ensuring that the necessary improvements to avoid future discharges get done as quickly as possible,” said Bill Ehm, administrator of the DNR’s Environmental Services Division.

Terms of the consent order are enforceable by law and cannot be appealed under the terms of the agreement.

“We believe we have achieved the best outcome when we can get producers to agree on improving facilities and operations that will prevent manure from going to where we don’t want it to go – into the water,” said Ehm.