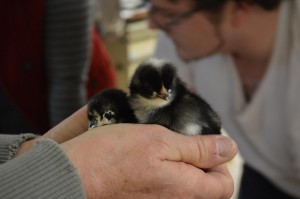 Chicks from the Murray McMurray Hatchery in Webster City, Iowa, are handed out at the Indian Creek Nature Center in Cedar Rapids on Saturday, March 30, 2013. (photo/Cindy Hadish)

Which came first? When it comes to backyard chickens, oftentimes it’s not the egg, but chicks from the Murray McMurray Hatchery.

Specialty breeds, such as Black Australorps; Silver Laced Wyandottes and Buff Orpingtons can be purchased from the hatchery – established in 1917 in Webster City, Iowa –  with a minimum order of 15 to 25 chicks.

City ordinances often limit the number of chickens each homeowner can keep – for example, in Cedar Rapids, the limit is six hens – so several people oftentimes join together for one order from the hatchery. 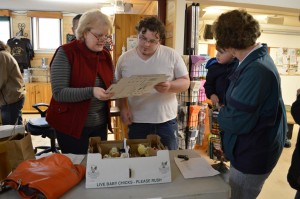 Such was the case at the Indian Creek Nature Center, when Rebecca Mumaw, Cameron Macaw and Tim Hennick brought 34 chicks back from the hatchery to distribute to fellow chicken-owners. The chicks, which cost between $2.39 to $6 each, were color-coded with marks on their heads to differentiate the separate orders.

Cameron noted that Easter is a time when some parents buy chicks, and rabbits, for their children, but those “pets” oftentimes end up in animal shelters. “Chickens are super easy to take care of, but it’s a time commitment,” he said.

Residents in Cedar Rapids must take an approved class, pay a $25 annual fee and meet other requirements, such as notifying neighbors before they can get their hens. 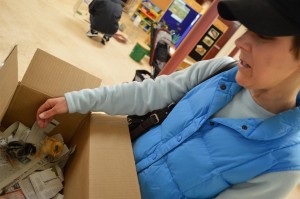 Sara Haas of rural Benton County looks at the chicks she picked up at the Indian Creek Nature Center before taking them home. Several people placed an order together through the Murray McMurray Hatchery in Webster City, Iowa. (photo/Cindy Hadish)

Iowa City passed its urban chicken ordinance last fall, so homeowners there will also have a chance to own hens. Roosters are not allowed in either city.

Sara Haas of rural Benton County has two chickens and picked up two more chicks through the order at the Indian Creek Nature Center.

“(Chickens) are lower maintenance than a cat,” she said. “It’s so easy and so unobtrusive.”

While she owns hens for the eggs, Sara said the chickens also provide a form of entertainment. Her Buff Orpington “is like a comedian,” she said. “You just watch her and laugh.”

The Indian Creek Nature Center offers a class that aspiring chicken-owners need to take before owning hens in Cedar Rapids. The next class is in May. See details in the calendar, above, and at www.IndianCreekNatureCenter.org