Viticulture: Japanese beetles and many, many other pests 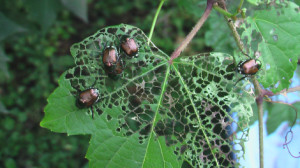 CEDAR RAPIDS – Between the various vineyard diseases, voracious bugs, birds and other predators, I’m amazed that any grape can survive to maturity.

At our most recent viticulture class at Kirkwood Community College, we learned about fungal diseases of grapevines, such as anthracnose or black spot; black rot – one of the most widely destructive fungal diseases in North America; powdery mildew and others. Most are combated with sprays and proper vineyard management, such as pruning.

We also discussed the use of nets and electric fencing to deter birds and animals, such as deer and racoons. Our instructor, Lucas McIntire, called bird netting a “must-do” for the vineyard. The netting is usually installed around Aug. 1 when the grapes are ripening. “Birds will ravish everything if you don’t have nets,” he said.

Other forms of animal control include scarecrows, flashy/reflective materials and “anything that makes noise,” including dogs and kids. Those are usually only temporarily effective.

We also tackled one of my favorite topics: beetle battle. Japanese beetles have become one of the banes of the vineyard, as the copper-colored foreign invaders have spread from the East Coast across the United States. One of my classmates, who lived in Florida, noted that citrus groves guard against the voracious Japanese beetles by setting up pheromone traps. But the traps are not near the trees. They’re set up blocks away, which aligns with the advice that traps are fine to use, as long as you put them in your neighbor’s yard. Otherwise, they are said to attract more beetles than they catch. 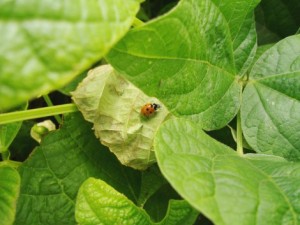 Asian lady beetles are another scourge of vineyards. Even one beetle in more than 7 pounds of grapes, dead or alive, can taint the wine. (photo/Cindy Hadish )

Lucas said the vineyards are sprayed with Sevin insecticide – frequently – or the beetles will skeletonize the foliage, turning it to lace. Caution must be exercised if Sevin is used to combat another vineyard scourge, Asian lady beetles, which look like ladybugs. Even one Asian lady beetle- dead or alive – in more than 7 pounds of grapes can taint the wine. A better mechanism is the use of methoxypyrazines, which irritate the tiny beetles and cause them to fly away.

I’m not a fan of synthetic chemicals; then again, I don’t have a vineyard to tend, but I know I’ll be facing my Japanese beetle foe by the end of June. I usually knock them into a container of soapy water to kill them, but am open to other techniques if anyone would like to share their ideas.

For more information, Lucas recommends the book, “Compendium of Grape Diseases,” with lovely photos of everything that can possibly go wrong with your grapevines.  More info on sprays can be found here.