Wet, cool weather delaying farmers; Iowa has yet to reach 80 degrees this June 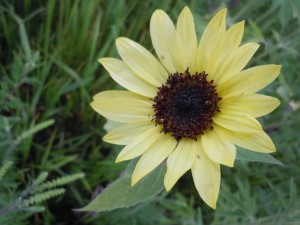 Sunflowers and nearly everything that grows is lagging behind this spring in Iowa. (photo/Cindy Hadish)

It was nice to see the sun today, after what has been an unusually wet and cool spring.

That wet weather is keeping farmers out of their fields, as the following reports from  Iowa Secretary of Agriculture Bill Northey and the Iowa Crops and Weather report released by the USDA National Agricultural Statistical Service show:

“Planting continues to lag behind as the continuing rains have prevented fields from drying and limited farmers’ ability to get in the fields,” Northey said.  “Several days of warm dry weather are needed to allow fields to dry and to help those that have been planted grow.”

Rainfall continued to limit fieldwork for Iowa farmers during the week ending June 9, 2013, according to the USDA, National Agricultural Statistics Service. Fields already wet from the previous week, did not dry enough between rain events to allow significant planting progress to be made. Farmers commented warmth and sun would benefit the growing corn and soybean crops.

Unseasonably cool weather prevailed throughout the past reporting week. Temperatures were below normal every day at all locations in the state with daytime highs mostly in the 60’s to low 70’s. Temperature extremes varied from a Monday (3rd) morning low of 37 degrees at Elkader to a Saturday (8th) afternoon high of 79 degrees at Keokuk. Temperatures for the week as a whole averaged 6.1 degrees below normal. The temperature has yet to reach 80 degrees anywhere in Iowa thus far in June while Elkader’s 37 degree reading was the lowest recorded in Iowa for so late in the season since 1998. Rainfall amounts were mostly on the light side of normal over southeastern portions of the state and above normal over the northwest. Welcome dry weather prevailed in most areas on Sunday (2nd), Monday (3rd), Thursday (6th) and Friday (7th) Rain was widespread on Tuesday (4th) with locally heavy rain scattered over the north and west. Light to moderate rain fell over eastern Iowa on Wednesday (5th). Finally, rain was widespread over the west on Saturday (8th) and slowly spread to eastern areas on Sunday (9th). Weekly totals varied from only 0.05 inches at Burlington to 3.10 inches at Underwood (Pottawattamie Co.) and 3.11 inches at Rock Valley (Sioux Co.). The statewide average precipitation was 1.11 inches or just under the weekly normal of 1.18 inches.